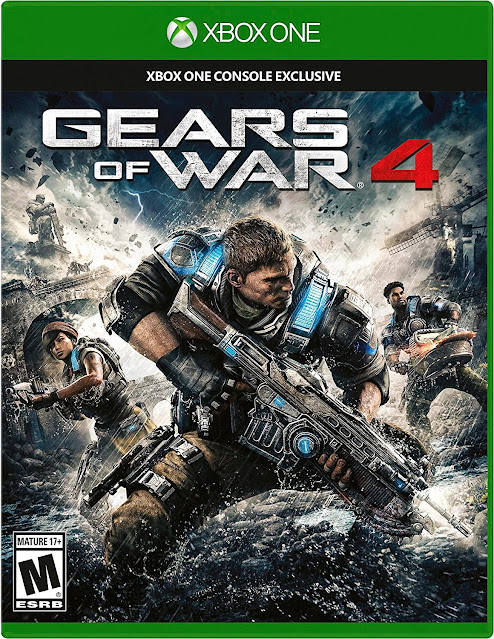 Continuing my relentless playthrough of the entire Gears series I have recently beaten Gears of War 4. Not including the remaster of the original game this was the first to come out on a newer generation console and it sure does show, the game is beautiful. With the original storyline coming to a definite end with Gears of War 3 I was intrigued to see where things would go, and by using a timeskip I was overall impressed even if there were some dud characters.

This fourth entry takes place 25 years after the Locust and Lambent where both finally defeated. In that time deadly windstorms dubbed 'Windflares' have begun. As a defensive measure the COG (Coalition of Ordered Governments) have created walled cities which the surviving human population mainly reside in, though others nicknamed 'Outsiders' choose to live outside of COG rule. J.D Fenix (voiced by Liam McIntyre) is a former COG soldier and son of Marcus (John DiMaggio). He, along with wisecracking best friend Del (Eugene Byrd) have recently abandoned the COG due to the strictness of the regime, they joined a group of Outsiders and befriended the chief's daughter, Kait (Laura Bailey - the voice of Abby in The Last of Us: Part II).
One day while stealing from a COG construction site they are set upon by the robotic COG army at the behest of First Minister Jinn (Angel Desai), she accuses them of kidnapping her people, much to the confusion of everyone. The following evening the Outsider village is attacked by unknown monsters. Fearing that the Locust have somehow returned J.D seeks out his estranged fathers help. 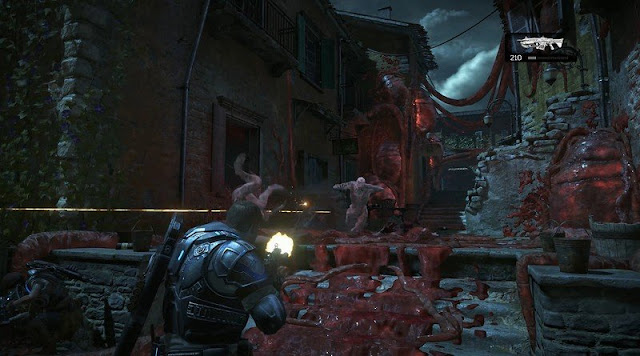 The very worst part of Gears of War 4 was the god awful irritating protagonist you are forced to spend the whole game playing as. He is a lazy Nathan Drake knockoff, the kind of arrogant smart mouthed idiot who always seems to win despite always feeling like he is way out of his depth. I loved playing as Marcus in the original trilogy, he was a meathead but that made him all the more endearing. He was someone with muscles wider than his head, and someone whose permanent anger resulted in him heading headfirst into danger at every opportunity. Not so with J.D, I couldn't stand this character so it was good that the three supporting characters were much better. Kait was a bit moody and miserable, understandable as her mother had been kidnapped by the new monsters (named 'The Swarm' by J.D and co). To begin with I hated Del also, but he has a lot of genuinely laugh out loud moments, my favourite was an exchange between him and Marcus which went something like... "Everybody better stock up on ammo" "Why? Do you think we will need it?" "Yes, unless your Lancer runs on smartass" "Well it seems to have been able to do that so far". As for Marcus it was a lot of fun to have him be so much older, though often felt weird when cutscenes ended and I realised I wouldn't be controlling him. In his old age he has surprisingly mellowed out, despite being lumped with a trio of people barely out of their teens. What the four did have was great banter, I loved how they named each new enemy type they discovered, and I loved the whole ongoing conversation about 'jinxing' things. That last one led up to some humorous playing around with the classic guitar riff that plays when all enemies are supposedly defeated in an area.

Kudos goes to the prologue, this took place as a series of flashbacks that have you playing as a nameless soldier. One of these is set during the Pendulum Wars (a human vs. human conflict) where you fight alongside Dom. Another has you battling on city streets on 'Emergence Day' (the day the Locust appeared), I loved the shock and surprise the soldiers get each time they encounter a new Locust monster type, felt like everything Gears of War: Judgement should have been. The final prologue mission takes place at the same time that the Locust are finally destroyed at the end of the third game. I loved these little bite size missions and state these three nameless soldiers were of course more fun to play as then damn J.D.
The game proper felt smaller in scale than previous games, maybe in line with the size of the very first game. It is again split over five chapters, each of which is cut down into smaller levels. All these levels felt huge in size, and reminded me a bit actually of the way that Mass Effect: Andromeda worked. The levels are full of detail and feature some fantastic weather effects, the Windflare sections in particular really stood out with how you can destroy barricades to take out enemies. The places you go to felt quite generic and if not for the wonderful graphics I don't think they would have been half as fun to battle through. The highlight in terms of level design had you fighting through an old tourist attraction of an ancient castle and its grounds, resulting in you heading into the catacombs underneath the cathedral. 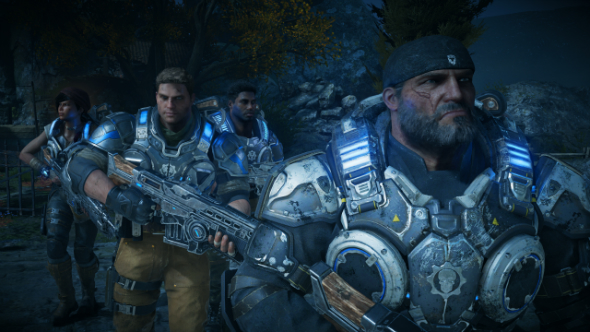 Being Gears, cover based shooting is the order of the day but this time around there are more varied enemy types. To begin with you are fighting robots, these were fine but not as satisfying as killing flesh and blood enemies. The introduction of The Swarm is where things get really interesting. Are they the Locust? Technically the design of some of them is similar to that, and the game plays around with this element. There are also a whole bunch of new monster types, giant insectoid creatures with easy to see glowing weak spots. Favourite new enemies were these albino monster monkey things that attack in swarms, had some great screeching noises for them.
There is some variation and some cool set pieces. Occasionally you are tasked with purchasing defences and then being charged with holding out in an area, thankfully these were few and far between, though the one on the lift was kind of cool. There is a very fun section towards the game's finish that had you piloting a mech suit, and one stand out set piece that had you quickly ascending a gigantic elevator shaft while destroying blockages and avoiding falling debris.
Set some 25 years later there are a bunch of new weapon types, yet it falls into the Lancer trap again, as soon as I got access to this classic gun I had zero desire to use anything else for the rest of the game.

I wasn't entirely sure what to expect with Gears of War 4 but I found it surprisingly enjoyable despite a terrible lead. It helped the graphics and sound were so good, but it also helped the main story was very interesting, even if it all ends far too abruptly. The leap forward in time brought to mind the new Star Wars trilogy with how they include fan favourite characters. I can't see Gears of War 4 ever being considered the best in the series, but it was well worth playing and 'geared' me up to be ready for the fifth and so far final one.