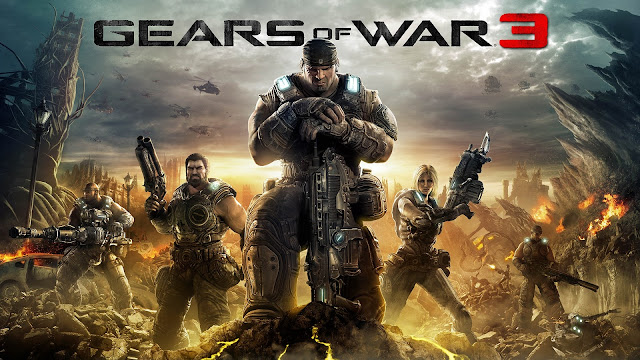 Continuing my run through the Gears of War series I have now finished Gears of War 3 which ended the original trilogy. Having never played it before I was hoping for a great finish to the trilogy. While it was indeed fun and ties up the story it wasn't quite as good as the more darker Gears of War 2. There will be spoilers for the previous games here.

This takes place around two years since the last human stronghold, Jacinto City was purposely destroyed in order to both flood the Locust's underground main base of operations (the Locust being an invading army of monsters from below the ground) and drown the Lambent (Locust soldiers who had been infected with the explosive 'Imulsion', the infection has them mutated by the substance). Since that time things have not been going well for the human survivors. The COG army is a shadow of its former self since its leader, Chairman Prescott abandoned his forces, and it turns out trying to drown the Lambent was a terrible idea as now huge tentacled monsters roam the seas of Sera, becoming a bigger threat than even the Locust were. When COG soldier Marcus Fenix (voiced by John DiMaggio) learns from a returning Prescott that his father Adam is not only still alive, but that he has also developed a weapon to destroy both the Lambent and Locust for good he sets off on a globe spanning adventure to find him. Along the way he is joined by a variety of COG soldiers, the main ones being his best friend Dom (Carlos Ferro), Anya (Nan McNamara), Sam (Claudia Black) and Jace (Michael B. Jordan - Black Panther, Creed). 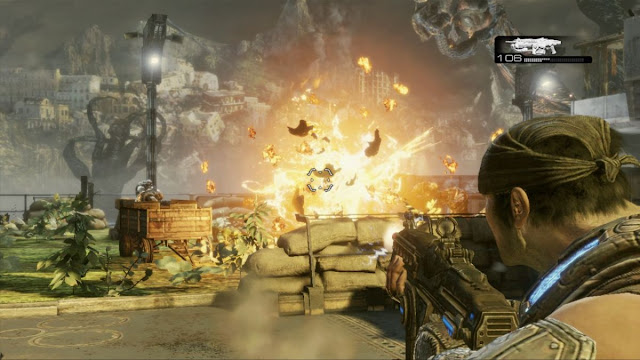 Being a much bigger game both in a design point of view and a story way meant it did lose some of the tightness of design it had previously. There are the variety of set-pieces I have come to expect from this series, the whole first excellent chapter takes place aboard a sinking warship for instance. Then there are moments that really stand out due to both environmental details and the introduction of new enemies. There is one level that takes place in a bombed out city, the streets are full of ash figures of the previous inhabitants frozen in the position they were in when the city was destroyed, including women and children this was unsettling. Another memorable change up came with a visit to a beachside town that seemed deserted. That is until the introduction of human Lambent enemies who are essentially the rage induced running zombies from 28 Days Later. This whole set of levels felt like a zombie survival game so was a cool diversion. Driving sections are back but not as fun this time around, especially a dull as dishwater first person perspective submarine level that felt like it went on forever.
At points levels really do feel like levels, each medium sized section broken up by the same animation of Marcus and his team opening doors up. This felt no more apparent than the levels set in the desert, weirdly sectioned off behind metal doors built into the rocks. Previously the games had been designed for two player co-op, here that number was extended to four. The larger arenas in this context sounds sensible, and I didn't really mind hanging around with more characters, I just wish they had been the right ones.

I am never going to complain about playing as meathead Marcus, Dom, while the least favourite of the core group was always someone I still liked, especially as he was so key to the story of Gears of War 2. I was even happy with Anya, before she has only been in the game as a support role so to see her kitted out in her combat gear was cool. You would expect the great double act of Cole and Baird to round out the main team and it feels like this may be the case to begin with. You get an excellent chapter in which you play as Cole, the highlight being when he returns to his former Thrashball stadium and has flashbacks to when he was a star player. However this whole chapter was almost a swan song for the duo, they spend the majority of the game elsewhere, only turning back up for the final chapter. Instead the main characters we are lumped with are newcomers Sam and Jace. These both irritated me mainly due to Cole and Baird having their slots taken, I had no interest in either of these two, Jace in particular had no personality to him (apparently the paid DLC expanded on his past). 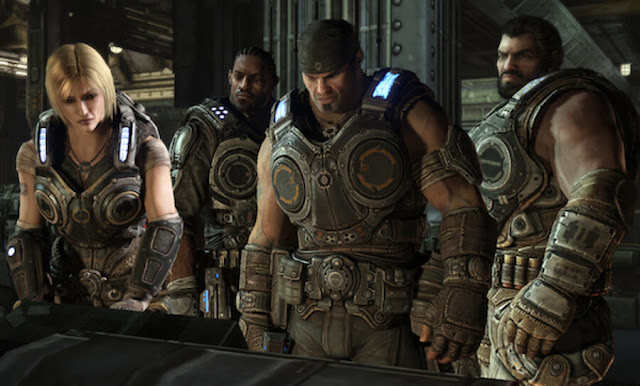 The main story gives the excuse for the fight to take place over many different environments, but some parts about how this occurred sounded a bit weird in execution. There is one part when you are instructed to travel to Atlas, a base said to be on the other side of the world, yet the time it takes to travel there on a slow moving blimp was just over two hours (not real hours, I mean within the story). Either it really wasn't the other side of the world or the world is a very small planet, I just found this detail to be bizarrely distracting. Everything is tied up by the end of the game but there were not as many surprises as I had hoped, especially when it comes to the Queen of the Locusts, the revelation I had expected never materialised.
Combat is cover based as usual though the more open levels mean you can get away with being out in the open a lot more. A nice improvement was that it is harder to be stunned when you have your chainsaw revving, making it easier to use that great tool more. There is a nice mix of Locust and Lambent to fight and it goes all a little Halo at times when three way fights occur. These parts are few and far between, most often there will be a few levels fighting Locust before it switches back to fighting Lambent for a few.

Gears of War 3 was a good end to the series but I did missed the more restricted setting of the second game. By travelling all over the world you miss out on tighter designed levels, while the change in setting can often feel as a excuse not to change up the gameplay too much, providing new environments rather than new things to do in them. It will be interesting to see how Gears of War 4 and 5 play out now that the story seems complete.