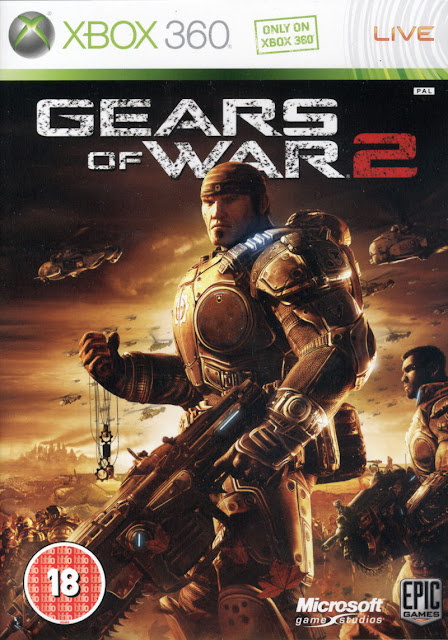 Having loved the first Gears of War video game I eagerly snapped up Gears of War 2 as soon as it was released back in 2008 and hated every second of it. I played through the game just the once and shelved it. I had no desire to ever return to it and over the years my memory of that experience faded so much that the only two bits of the game I could recall where being frustrated while trapped inside a giant worm, and the death of a key character. Memory is such a weird beast, playing through the game again not only did I have an absolutely fantastic time, but nothing felt familiar, it was like I was playing it for the first time. Gears of War was a great game, Gears of War 2 is a stunning game.

This sequel picks up six months after the events of the first. The lightmass bomb detonated at the climax of that one had been hoped to destroy the Locust's main stronghold (the Locust being an invading army of monsters from within the planet the game takes place in). Rather than finish off their enemy the Locust assault only got delayed, they return seemingly more numerous and stronger than ever before. They are focussing their ire on the city of Jacinto, one of the last remaining strongholds of the COG army. In order to combat this threat the COG decide to bring the fight to the Locust, sending in an army to their main network of tunnels. The hope is to locate the Locust Queen, and with her death bring an end to the never ending war. 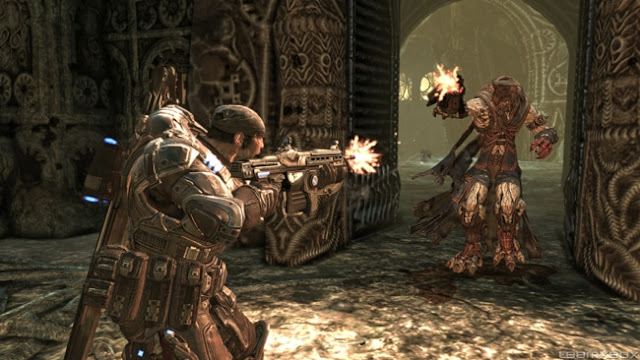 What a game this was, though initially at the outset I had a brief feeling my jaded memories would hold up. The game starts in a much larger scale than the first game. While you are in a squad of usually four characters you are battling alongside others and so the story felt less focused on singular characters than previously. It isn't too long when it starts to feel much more insular, the game always feels at its best when you are isolated from outside help. As with the first game Marcus Fenix (voiced by John DiMaggio) is the character you control, and like the first game he spends much of his time with his war buddy Dom (Carlos Ferro). The first game had Dom briefly mention he was looking for his missing wife, Maria, here that goal is brought to the forefront. Dom never had much personality to him before, this time he is constantly shown frustrated and desperately missing his Maria. This focus even includes several dream sequences that he has. It was a bit odd this transformation in his character, but by keeping it on Dom and not on Marcus the game gets away with this sentimental aspect. Along the way a variety of others join your squad, the best being again the amusing double act of Baird (Fred Tatasciore) and Cole (Lester Speight). Their inclusion was a joy, mainly as a lot of the game has them off doing other things, so the few times you get to spend time with them were highlights.

You spend a lot of the roughly six to eight hour game underground, but there was a nice balancing out with you returning to the surface every now and again. It made for a different feel to the first game's human cities, the alien architecture of the Locust's world gave a cool horror vibe to it. The game as a whole felt more horror like in feel, this comes to a head in a wonderful level that takes place at night in a secret COG facility, while it is pouring rain outside. Here you encounter a hostile A.I, as well as the vat grown monsters hidden deep within the facility. The game looks beautiful, even now the graphics are pretty darn amazing. It also feels like a huge game, there were several points I felt like I was right near the end only to discover there was yet more twists and turns to keep the story moving on. As with the first game there is no end of variation in what you do and how you do it. Often new game mechanics are introduced and used just for the one section, such as when it is raining 'razor hail' and so you have to create overhead cover for yourself as you traverse the level, or when you have a moveable wall in the form of a rock worm that you have to lure from place to place by knocking down overhanging fruit for it. Talking of worms there is one level that takes place within a gigantic skyscraper sized worm. This fleshy level contains almost no combat, instead the threats you face come from stomach acid, the noxious fumes of the creatures intestines, and the danger of drowning in its blood as you chainsaw through its heart! 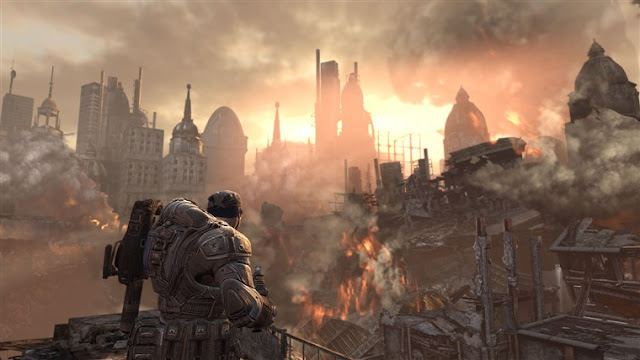 The core of the game is the cover based combat which is as satisfying as ever. It felt like a lot of the areas were more large and open this time around, but there was always usually plenty of cover, even if later on the enemies get the ability to pull switches to remove this cover. This game does everything Gears did but adds on to it. For instance, Gears had one driving section, this one has three. One with you driving an armoured vehicle in a level that felt straight out of Halo, two others in which you control one of the huge enemy monsters, the one that has you riding a Brumak was quite the power trip. Improvements can be seen with the ability for your A.I companions to revive you should you go down, this also applies to the enemies who are able to revive each other. Destructible cover was a nice touch, and the increase in cutscenes helped bring the war torn world more to life. There is a lot of explanation for why the Locust are doing what they are doing, yet also many questions left unanswered.

Gears of War 2 is everything a sequel should be, it felt like every aspect was improved upon. The story was more interesting and better told, the levels felt more epic and better designed, the gameplay more satisfying, an increase in the variety of enemies you face, while keeping this feeling resolutely Gears. As a bonus there is some downloadable content that features a cut level that is purely stealth based. It was interesting to see Gears do stealth but was also obvious why this didn't make it to the game.