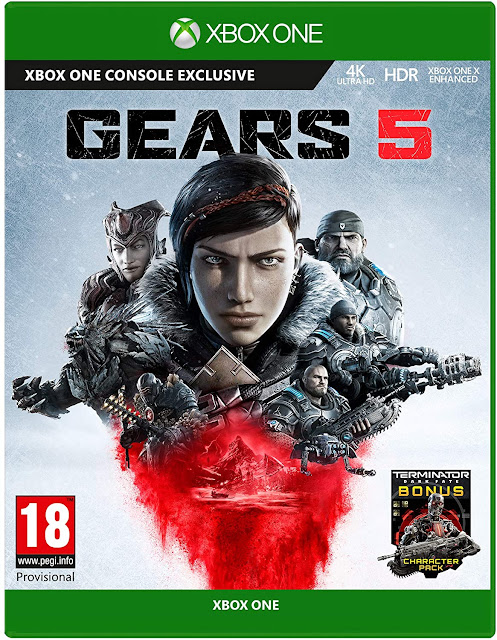 After a week of playing through the Gears of Wars series I finally finished the latest mainline one, Gears 5. I really enjoyed Gears of War 4, indeed one of my main complaints with it was the unlikeable protagonist, J.D (voiced by Liam McIntyre), but other than that the game was mostly a joy. Whether it was due to fan feedback, or whether it was the intention all along I don't know, but I was relieved to see the vast majority of Gears 5 has you playing as the character of Kait (voiced by Laura Bailey - The Last of Us: Part II) instead. There will be spoilers for the end of the previous game in this review.

Unlike all the other entries in the series this one is split into just four different chapters, rather than the traditional five. Chapter 1 takes place a few months after the end of the previous game and has the returning characters of J.D, Marcus (John DiMaggio), Kait and Del (Eugene Byrd) now all enlisted as COG soldiers trying their best to defend against the Swarm (the reborn Locust monsters) who are appearing in ever greater numbers. Since having to kill her mutated mother, Kait has been having strange nightmares and visions, while she is troubled by her mother's amulet which has Locust designs on it. Marcus tells her of a secret facility in the northern mountains that might help provide answers to her mysterious link to the creatures. 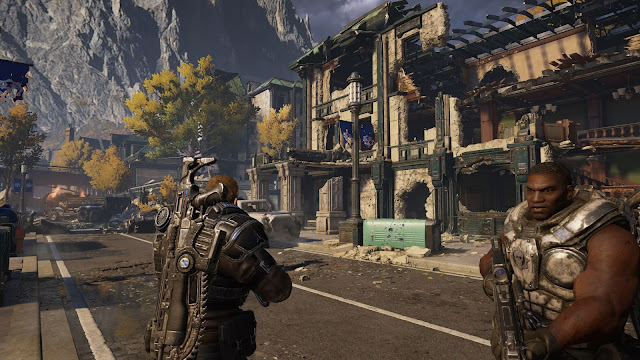 Gears 5 is the Empire Strikes Back of the Gears games. It is easily the most bleak, ending on an even bigger unresolved plot than the fourth game did. It was so nice not to have to play as J.D after the first chapter. Saying that though they did a lot with his character, or at least character reactions to him. There becomes a feeling that he is doing his annoying Nathan Drake style shenanigans in order to live up to the legend that has father has, and that all comes crashing down in one of the games gut punching moments. With the first new game being all about Kait I can see why the decision was made to put the focus on her, this time around more so than the first this is her story, even if that kind of changes after the halfway point. Gears has been emotional before, but this has the most devastating moments, moments that make you feel bad in a way that The Last of Us Part II also managed to achieve.

This sets up a weird imbalance in how the game plays out. Chapter 1 is traditional Gears, high action set pieces, lots of fighting and everything you would expect. The second and third chapters go in a completely new direction. Playing as Kait you are put into a medium sized open world setting. You have a skiff with which to travel the land, a main objective to head towards, but also a bunch of optional side quests to complete. It felt like a blend of Destiny and The Last of Us Part II, the side quests grant you rewards but also add to the world building going on. Then there are the settlements you go to which change into an Uncharted style slow walk as NPC characters go through set conversations between themselves. The barren open world is devoid of enemies except for the set little areas you can head into to explore. I liked this change up but it felt strange that both the second and third chapters are like this, while the first and last are more traditional. It would have made more sense for these styles to be mixed up as exchanging an ice field for a desert didn't really alter much. Not that the level design is ever boring, and this has great fan service with locations from all three of the original Gears games reappearing looking stunning. I was especially pleased with a lingering plot thread from Gears of War 2 finally being resolved. 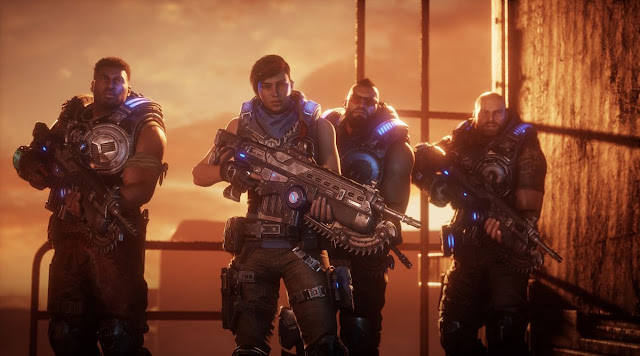 The game is as satisfying to play as ever, the cover based shooting you would expect but with some upgrades. Specifically you have Jack, a flying robot who has access to various abilities that you can order him to use. These are used to navigate the environment at set points. So for instance, to get through a room that is leaking liquid nitrogen you activate your health shield, to get past a sentry turret you would activate the invisibility power. Over the course of the game Jack's abilities can be upgraded by finding hidden items around the levels giving it a slight RPG element. There are all the usual weapons to find and use, but the Lancer, usually the essential gun is no longer so. As you are now equipped with a melee knife attack, the Lancer's chainsaw isn't really needed anymore.
A lot of the enemy types return from the fourth game, it was cool to see all of these. They are added to with a bunch more horror themed enemies. I particularly liked the 'rejects' which are robots covered in giant leeches which behave manically and lead to some almost pointless, yet still fun stealth sections. A lot of enemies now have energy bars which I thought was a good idea.

As well as the main campaign there is also a DLC campaign called Hivebusters which is unrelated to the main story. In this addition you play as Scorpio squad, a team of three who have essentially been sent on a suicide mission to infiltrate to the centre of a Swarm hive and detonate a bomb. This was split over six chapters, mainly taking place on small jungle islands, it followed the pure action format and had such highlights as sailing down a lake of lava and fighting through heavy jungle. 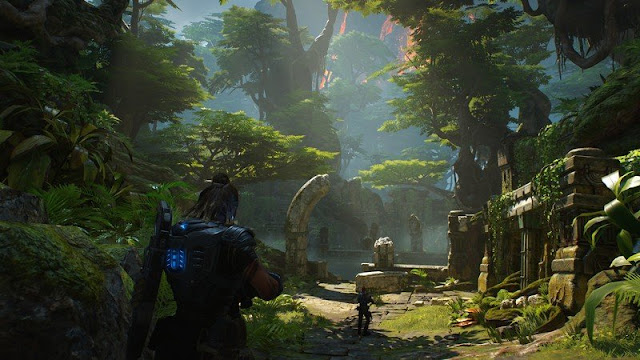 Gears 5 has graphics that are frequently stunning, I loved the weather effects and the way buildings crumble and collapse. In terms of overall enjoyment this was heading towards a 9/10 from me, but the shorter feeling experience, along with the uneven change in styles led to this just missing that, I would still say this was probably my second favourite in the whole series. This new trilogy is shaping up to be a very worthwhile investment of your time.