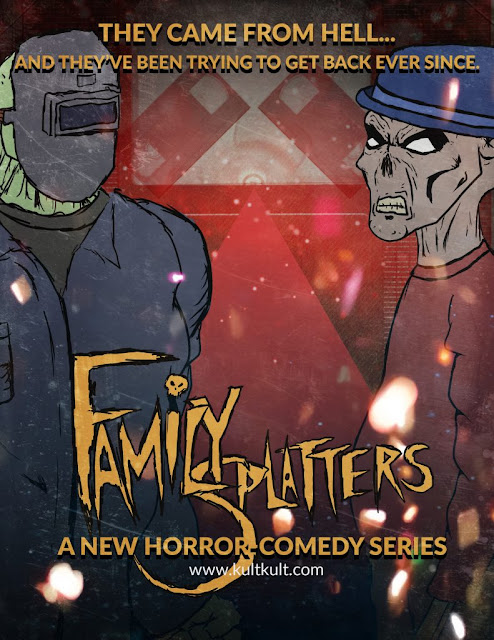 Family Splatters is a new animated horror-comedy series that is due out this summer from KultKult Entertainment. The press release for this describes the show as focussing 'on Matthew Silverstein and Roddy Luger: two of the most notorious slasher movie stars of the 1980's. After a short stint in Hell starting in 1993, Roddy and Matthew are banished to the year 2021 as punishment. Unaware of ways that the world has changed since the 80's and early 90's, Roddy and Matthew have to adjust to new technologies, unfamiliar ideas, and new cultural norms around killing people."

The pilot episode runs at just under ten minutes and despite the opportunity to offend it didn't actually do that, which is a good thing I think. The leads seemed fine enough, when they kill it felt almost like habit to them so there was no maliciousness in their actions. The world they find themselves in seems to regard death as very cheap with no consequences for murder. As a pilot it didn't completely set up the world of the show effectively, I was confused if this takes place within a kind of shared movie universe, or if these were real life killers who just happened to also kill within films as well. If death is consequence free then I could see the later applying. The show is billed around Roddy and Matthew but the pilot also featured a third killer, Joe who worked a lot better than Matthew. This was due to Matthew representing the strong silent masked slasher type and so when he spoke it was in a way similar to Kenny from South Park, all unintelligible mumblings. 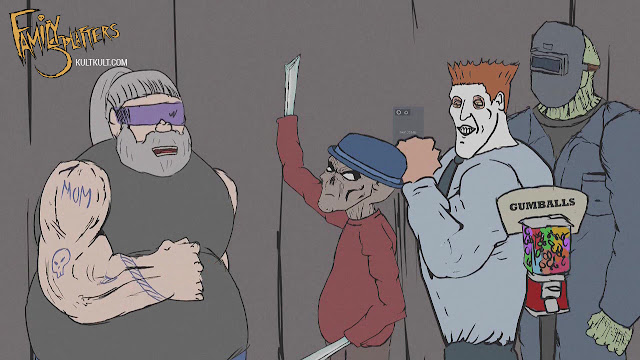 The animation style is very simple, it reminded me a bit of the old MTV shows you would get. This style is a genre all of its own nowadays, and is certainly intended. For me this animation was my favourite part, the simplicity of the backgrounds were consistent (at one point a crowd of people is represented as a series of stick figures) and kept the focus on the characters that mattered. I also liked the directing and editing, during one flashback scene in particular set at a strip club the music and repeated uses of close up images combined really well.

As a pilot Family Splatters was perfectly fine, I didn't find it particularly funny but nor did I find it distasteful (aside from maybe one moment). I could see myself watching more of this to see what direction they end up taking this. As a bite size slice of life horror animation this was entertaining to watch.