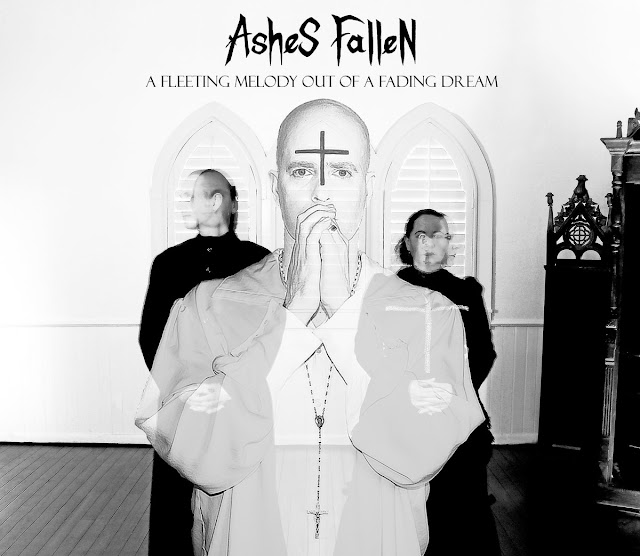 The impact of the pandemic was always going to hit this blog at some point and that time is now. Usually I'm too wrapped up in watching films for review to really branch out and look at other things. With currently zero screeners awaiting review I can instead once again turn my rotted eyes to music. I literally always say the same thing when confronting a music album for review and that is I know nothing! With Ashes Fallen's sophomore album, A Fleeting Melody Out of a Fading Dream I can say one thing for sure, and that is the music is great throughout.
Ashes Fallen formed in early 2019 and are comprised of husband and wife, James (lead vocals, guitar) and Michelle Perry (keyboard, percussion, backing vocals), along with friend and former bandmate of James', Jason Shaw (guitar). They fall into the genre of gothic rock, a genre I know little about so my references will be to what I'm familiar with. Opening track is Stand Your Ground, a powerful opener that was very eighties synth in sound, it closes out with the introduction of Michelle's backing vocals. Next is We Belong Nowhere, a dark pessimistic track whose sound brought to mind the music of Manic Street Preachers 'Holy Bible' era songs. That one was originally released as a single in August of last year. Track three is Bear Witness, a track I described in my notes as 'a Eurovision song but meant in a good way', this was about being around to see the decline of society.

Fourth track is Thy Will Be Done, another single that came out last year (in May). This had a good beat and the repeating key line of "God won't save us from ourselves". The middle track of the album is Human Condition is Terminal which is a much slower song, it seemed to be about how life is what you make it, not going to lie, I often skip this one when I listen to the album. Just Let Go is the most experimental track on the album in that it begins with a ringing phone which is then incorporated into the beat of the song. This had an ever so slight Radiohead 'Paranoid Android' style musical riff going on. Vampira - The Ballad of Maila was a tribute to Maila Nurmi, the woman behind 1950's scream queen, Vampira. This track had a cool electric guitar sound and pounding drums and is the band's latest single.

Into the last three track of the album now with Forever?, a moody track that features a great instrumental coming in at two minutes 56 seconds. Penultimate song is All Shall Fall which must be my favourite track on the album as I immediately re-played it again when it ended. This was bleak with a fast paced drum beat. The final track on the album is Requiem, the album's second slower song.
I'm always surprised when I enjoy an album I've been sent for review, and with A Fleeting Melody out of a Fading Dream I had a decent time listening to it. I think I maybe enjoyed the actual music more than the singing and lyrics but aside from the more slower tracks there was not much here I didn't enjoy even if it is not particularly feel good. Ashes Fallen's A Fleeting Melody out of a Fading Dream released on 4th June, check out the video for Vampira - The Ballad of Maila below.
SCORE: