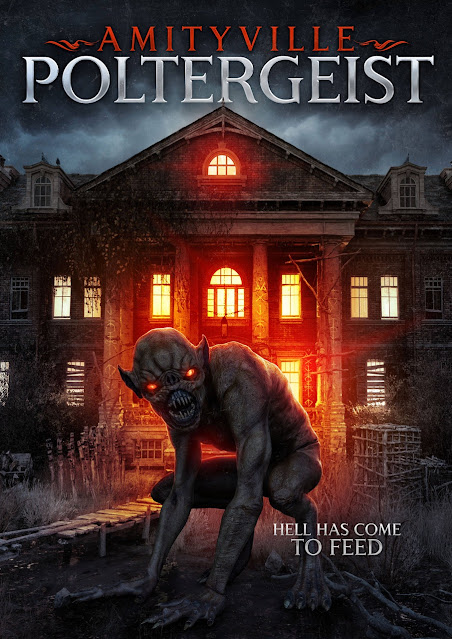 I wanted to enjoy Amityville Poltergeist (directed and the screenplay written by Calvin Morie McCarthy) and I did try my very best to. I have a confession about the film though, I just could not make head or tails about what on earth was happening. I was confused about the flow of the story and felt the horror aspect was ill defined at best.
Jim (Parris Bates) is a young man who needs a job badly. One night while hanging out with his best friend, stoner Collin (Conor Austin) and his girlfriend Alyson (Sydney Winbush) he sees a local advertisement for a house sitter. Eunice (Rebecca Kimble) is an elderly woman who potentially is suffering early signs of dementia. She is convinced there is something evil in her house and so her son hires Jim to keep an eye on the property, while he takes his mother for treatment. Rather than be a product of her failing mind however it soon starts to feel like something really is wrong with the house.

I think (but am not sure) that the film takes place intermittently between two different timelines. It starts off well using a plot device I really like of having an event taking place in the present and then flicking back to the past to show how things came to be this way. In this case the son returns with his mother after their weekend away to discover Jim cowering in a cupboard under the stairs, before the film leaps back six days. The rest I was just confused about. It splits between Jim in the house at night time, occasionally he is on his own, sometimes Collin is visiting, sometimes Alyson, and sometimes both of them. I was getting a bit lost but it seemed to be many more nights than just a weekend, maybe it was a week he was there for? The horror comes mainly from the nightmares that Jim has about a ghostly figure of a girl walking around the house. The one cool sequence here had him repeatedly thinking he was awakening from his nightmare only to then discover he was in fact still sleeping.
The other half of the film takes place almost entirely during daylight, I think (but am not sure) that it occurs at the same house that Jim is at. Eunice complains of being unable to sleep, about recurring nightmares and how she just doesn't feel safe. We also get to see some scenes of her nightmares about a ghostly figure of a girl.
The inspirations for the haunted figure come from Japanese horror films. The ghost woman is very Grudge like in her movements, sometimes crawling around on all fours, her special move being to poke her head or hands around an open door at a weird angle. There is one scene that was taken from Ringu with the ghost seeming to be on the verge of crawling out of a TV screen. This horror was all interspersed between far more normal goings on. There is a love triangle with Jim, Collin and Alyson, Jim's tortured past due to his mother dying of cancer, Eunice really wants a weapon with which to protect herself, while her kids worry about her potential mental illness. For all these side plots I wish there had been more exploration into who or what the spirit was, there is no discussion about this and no real combination of the seemingly two different main plot threads going on. I was so confused as to the flow of the story that it felt like scenes were edited together wrong. At one point it seemed like a character had died but the next scene it looked like the same character was alive and well? By the end twist I was beyond being able to decipher this, it couldn't help but hamper my enjoyment.

Amityville Poltergeist was quite slow in dishing out the moments of horror and when they did come they were never that original, even if sometimes they were nice recreations of scenes from other movies. The core cast were fine but with a story that was so hard to follow it was hard to really care too much about any of them. Amityville Poltergeist came to DVD and VOD on 18th May from Breaking Glass Pictures.
SCORE: