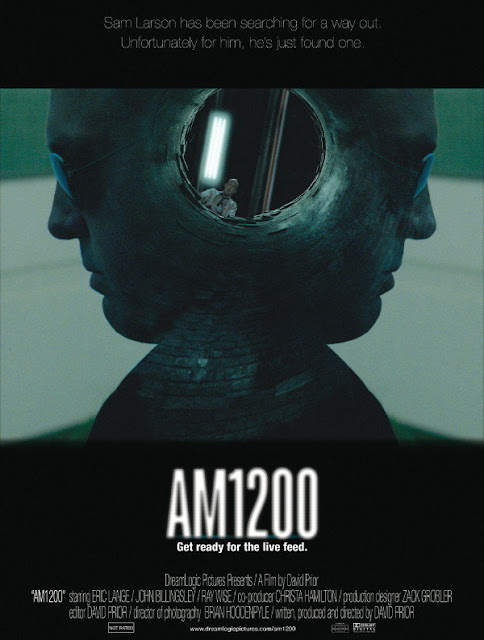 A few months back I stumbled across a list of the best films to watch that were inspired by the works of that master of horror H.P Lovecraft (nowadays it has to also be stated he was also a master of racism). I made a note of the films on that list and have slowly been trying to watch them all. I found this list after viewing Resolution and it's spiritual sequel
The Endless, and wanting more movies of that type. AM1200 is one of the films from that list and is a short forty minute horror that was written, produced and directed by David Prior, someone who is best known for making video documentaries.
Eric Lange (Fear, Inc., Lost) is Sam, a businessman on the run after having committed a crime against the company he worked for. While travelling down a lone highway he tries to tune his car radio and picks up a broadcast from a radio station on frequency AM1200. The broadcast is from a man who is begging for assistance from anyone who happens to hear his message. With the station relatively nearby Sam decides to check it out. By the time he gets to the remote station night has fallen, but with the place looking to be in a state of disrepair he decides not to investigate. Fate intervenes after his car breaks down, with the radio station the only building around for miles Same decides to go check it out after all. 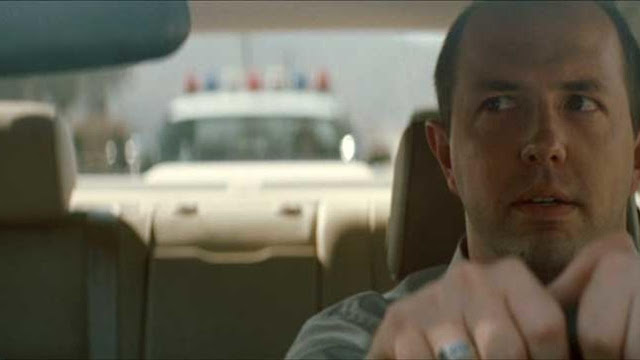 I was very impressed with an early shot in this film. The camera pans over to a map of America, and as it centres on a particular road on the map the shot smoothly transitions into an aerial drone shot of Sam riding in his car. This was such a cool way to present the journey the protagonist had started on. To be truthful aside from this cool shot the intro didn't really initially get my attention. It was a bit confusing as to what was going on, there was more an insinuation of a crime having happened than anything being shown. The most notable bit from this prologue was a fun guest appearance from Ray Wise (Dead End, Twin Peaks).
From the moment the radio broadcast is picked up is when AM1200 really starts to improve, culminating in the wonderfully confused goings on when Sam finally enters the building. A lot of crazy things happen in that building and I don't want to spoil any of them. Needless to say things take a violently surreal turn with Sam drowning in The Twilight Zone. Sure, I guessed where the story would end up but I certainly didn't expect any of the sights and sounds along the way. This was full of nice special effects and a dark oppressive atmosphere that had a feeling of wrongness about it.
AM1200 is a decent short horror, one whose inspirations from H.P Lovecraft only become more evident as the tale plays out. This was officially released at the H.P Lovecraft Film Festival in 2008 where it won The Brown Jenkin Award. The best thing though is this is currently free to watch on YouTube, I will include a link to that below.
SCORE: