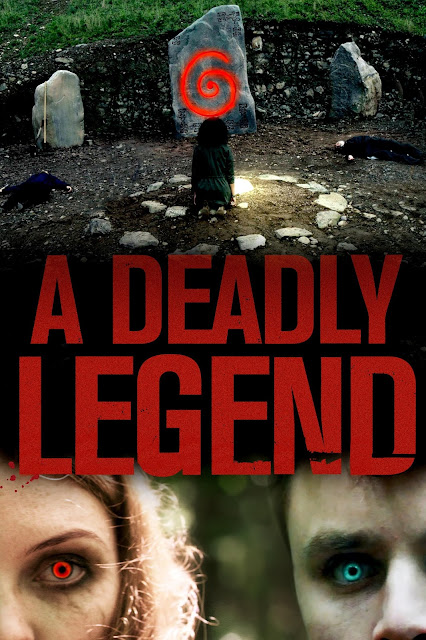 A Deadly Legend was the directorial debut of Pamela Moriarty, and it also featured Eric Wolf in his first credited writing role (Wolf also plays one of the more memorable characters here). To begin with this just seemed like another generic low budget indie horror, and while it is certainly cheesy at times there are moments that made this a whole lot more memorable than first impressions would indicate.
Joan (Kristen Anne Ferraro) is a real estate developer who has finally gotten approval to begin work at an old summer camp her business purchased. As a celebration she has gone to the area with her family and friends for a weekend of fun. These include her business partner Raj (Shravan Amin) and his wife Eva (Jean Chung - Iron Fist), her employee Sam (Dwayne A. Thomas - 21 Bridges) and his family, and her teenage daughter, Krissy (Andee Buccheri - Village of the Damned TV series). If they had listened to local crazy man Carl (Judd Hirsch - Independence Day) they would have realised digging up the ground in the area was a bad idea. It is the secret location of a collection of ritualistic stones, that every 50 years becomes the central battleground between supernatural forces who want to open a gateway to the world of the dead and the supernatural forces who want to keep that gateway closed. Their battle sees them possess and kill anyone nearby in order to achieve their goals, so soon the body count begins to rise. 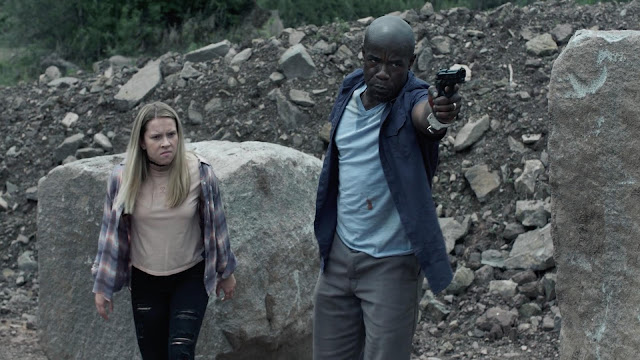 I think one of the problems that stops this indie horror from becoming great is that there are just far too many characters. It led to moments of confusion with so many different groups of people all off doing their own thing. On the flipside however it leads to plenty of fun death scenes. It didn't help that many of these characters felt like they existed only to be killed off, and that a few of them were either irritating or dull. Irritating personified with Wanda (Lori Petty - Tank Girl) the beer obsessed girlfriend of possessed construction worker Mike (Wolf) who was a onenote walking annoyance, and dull summed up with Eli (Samuel Blustein), an important character but one who had the charisma of a plank of wood. Even Joan, arguably the main protagonist suffered from being an uninteresting character. Thankfully there are a fair few more entertaining characters, especially with Mike who was a character that was at one both possessed, and displaying occasional moments of tortured awareness of his lack of self control. He shares some of the best scenes of the movie with his boss Sam.
One of the better ideas in A Deadly Legend was that both the 'good' and 'bad' spirits are killing people in equal amounts. The good takes the form of a possessed Eva, now known as the 'chain witch'. Fittingly she is decked out with deadly chains, including one that magically flies around above her. I liked that even though she should have been a good character her aim is to kill anyone around, both as revenge for them disturbing the ritual stones, but also to prevent them from performing the ritual. On the opposite side you have the spirit Luci (Tatiana Szpur - The Banshee) whose main reason for possessing Mike is so that he can kill anyone who might try and stop the ritual from occurring. This all leads to an interesting set-up of the protagonists often working with the evil forces as the chain witch is far less likely of the two sides to listen to reason.
Some parts of the story were a little dumb, I thought everything revolving around the gemstones and crystals was ridiculous, for a lot of the film this remained a subplot but got dragged into the forefront for the overly dramatic and cheesy finale. I also didn't understand the epilogue, I thought it was kinda neat to be honest but it made little sense. 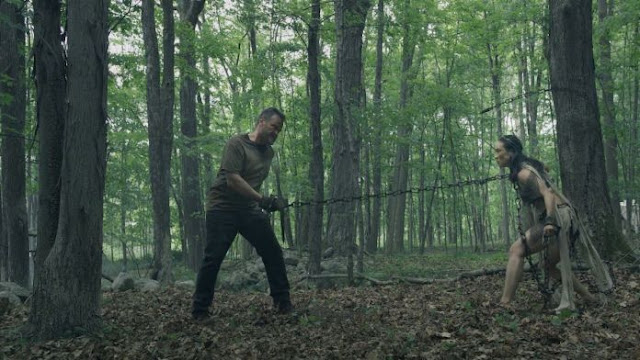 With two killers on the loose there are plenty of deaths, my favourites all come from Mike. He may be possessed but his personality still finds a way to come through. For example, after burying one of his victims alive under a pile of rubble he places an empty beer can into the hand of a protruding arm, another victim of his is discovered tied to the front of his truck like a teddy on a lorry. It would have been so easy to make generic death sequences for everyone killed but it is to the film's credit that more effort has been made. It helps that the special effects look decent, and add some nice touches. When a character is dragged off a floating platform in a lake by a chain attached to their leg there is the cool addition of their nails being shown to be ripped off as they desperately try to claw onto the platform.
A Deadly Legend has its flaws for sure. I enjoyed the film despite the main story and its resolution being a bit off putting. Everything in between was quite fun in a low budget indie way, a decent amount of kills, mostly good special effects, and a couple of actors whose roles stood out. A Deadly Legend is due out on 9th August thanks to High Fliers Films and is better than its 2.7/10 rating on IMDB would suggest.
SCORE: