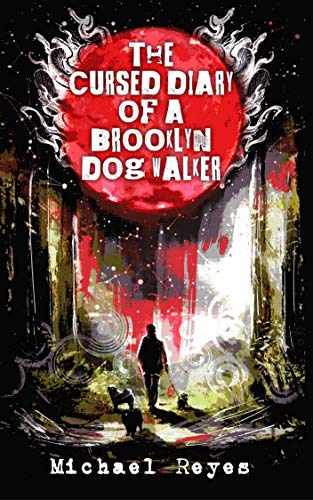 It was pure coincidence that when I was offered Michael Reyes The Cursed Diary of a Brooklyn Dog Walker to read for review I happened to be reading another book from that author, The Black Veldt. To begin with I attempted to read both together, that really wasn't making much sense and so after finishing the novella I began reading this one in earnest. There are similar themes and ideas here, mainly that this features a New York setting that includes elements of the mythos that H.P Lovecraft created.

Jesse is a dog walker in Brooklyn, with a variety of rich clients. One day while out walking the dogs of his favourite client, Claudia, he discovers a strange diary that seems to emanate a power from within it. He feels a strange pull from the book and feels compelled to take it. It isn't too long later that he is given an odd assignment from one of his richest clients, the somewhat perverted Mr. Smith. Little did Jesse realise that this would take him on a Hellish path in which a snake worshipping cult seek to end all life on Earth, and that it seems he may be the only person capable of thwarting their plans.

Much like The Black Veldt, The Cursed Diary has a dreamlike feel to it, especially after the first act. Unlike that one however this felt more traditionally set out. Underneath all the craziness of the world there is a more familiar three act structure. This actually made it a lot more enjoyable to read, once again helped by Reyes' writing style. He seems to excel with flawed protagonists who exist more towards the bottom rungs of society, Jesse is a more likeable lead, especially due to his love of dogs and his inherent ability to get them to do what he wants. Potential love interest Claudia felt a little like a walking plot device at times, often used as a motivator for Jesse to move forward, but she is just one in a cast of interesting characters, such as his Dungeons & Dragons obsessed drug dealing flatmate. The most memorable character being the grotesque and terrifying Trevor John who had a very memorable introduction with his emergence from a port-a-loo, and the many descriptions and uses of his beloved 'ankle spanker'.

The story here is high stakes and yet there is an element of comedy to things, dark humour is the order of the day, such as the farcical bickerings of the cult members and their sometimes petty motivations, as well as the incidental details such as a fantastic chapter taking place during a wild night at a bar. H.P Lovecraft inspirations seem mainly to be the star the snake cult, Algol Egregor worship, the idea behind this malevolent star reminded me of Lovecraft's short story Beyond the Wall of Sleep. This cosmic horror is something that always interests me and here it's combining with the mundane makes for a novel mix. I loved details such as the importance of Jesse's missing mentor, and the bizarre dog walking culture that Jesse inhabits. I also liked the descriptions of the powers he unlocks, comparing the feel to being on drugs helped shape Jesse's character.

The Cursed Diary of a Brooklyn Dog Walker was a book I knew was going to be well written and so I wasn't disappointed. The slight comedic elements reduce the horror, but with a more likeable protagonist and an easier to understand structure I enjoyed this. At times things are a little predictable but that doesn't change the inventive ideas used throughout. The book is out now via Nightmare Press.