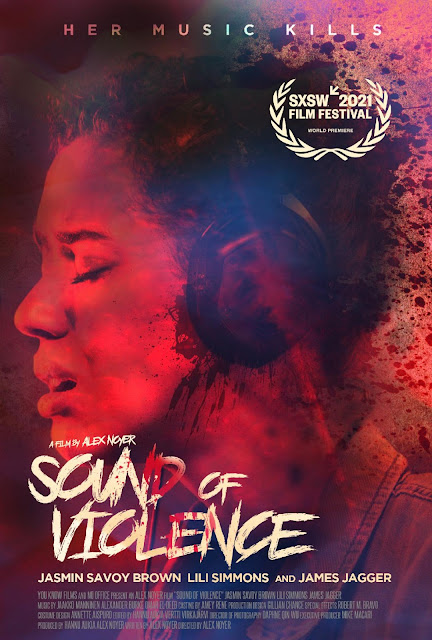 Back in 2018 I had the pleasure to watch Alex Noyer's short horror film Conductor, that I gave a 9/10. The six minute run time included some ultra violence that was not expected at all, and had a unique idea to it that was just so bizarre. I had heard rumblings at the time that Noyer was going to adapt this concept into a feature film, and now that has arrived in the form of Sound of Violence. Often when short films are extended into feature length ones they include the original short somewhere within. Here though there are elements of that short that are threaded into this one. Conductor featured a side character named Alexis who was a sound technician, she seemed to play only a minor role in that one, but it can't be coincidence that the twisted protagonist here is also called Alexis and bears a passing resemblance to her counterpart.

After an accident as a child Alexis lost her hearing. One day she feels a commotion coming from downstairs and is shocked to see her PTSD afflicted father beating her mother to death, resulting in her being forced to kill him. However this traumatic event also brought on the onset of synesthesia that miraculously repaired the damaged pathways in her head and gave her back her hearing. Now grown up and Alexis (Jasmin Savoy Brown) discovers her hearing is starting to fail once again, taking a lesson from the past she decides to resort to very drastic measures in order to again initiate this strange synthesia in order to remain able to hear the music she so desperately loves.

Sound of Violence could often be quite hard to watch, and that was not all down to the actual violence. Alexis is a quiet almost sociopathic loner whose only real friend is her flatmate, Marie (Lili Simmons - Bone Tomahawk) who she has hidden feelings for. Her interactions with characters at times become so uncomfortable to watch due to how much they made me cringe. There are at least three toe curling scenes in the film that made me feel so awkward that I had to pause the movie and do something else for a little bit. Then there are the scenes of violence that are very effective, and hard to watch due to how nasty they were (that isn't a criticism by the way). The iconic music box from Conductor makes a reappearance in one of the films best scenes, can't really say much more for fear of spoilers. The hardest to watch scene featured a drugged harpist who was slicing her fingers up as she played an adapted harp. The blood always looked good on screen. These scenes all had great special effects that really sold the visuals.

Following a protagonist killer brought to mind The Stylist, but I enjoyed this one a lot more. Having a lead who is secretly very damaged reminded me of Dexter, they even share a similar origin story. The character of Dexter was made likeable due to him only targeting bad people, not so with Alexis who doesn't seem to care who she kills, for her the music and addicting experience of her synthesia is what drives her on. It was hard to empathise with her, even if she was obviously mentally unwell. The sound and lighting often help bring the story to life more, I liked that whenever Alexis lost her hearing all sound would abruptly cut out until the point where it would return, I also thought the projection of what she is seeing when the sounds of violence is converting into colours was effective, lots of lens flare and floating visuals that went well with the bliss that appears on Alexis' face.
The story always seemed to be heading to a crescendo but it never seemed to get there. The sub plot of a detective (Tess Munro) investigating the strange murders felt like it could have been strong enough to have been the main focus. I think it would have been just as interesting to have the whole movie follow this investigation, especially as the culmination of Sound of Violence is her subplot coming to an end, rather than any real finish to Alexis' ambitions.

While this was at times hard to watch I still thought this was a really interesting idea that had some really unique kills, each one looking great on camera. The blend of visuals and sound combined to make for a memorable experience. Sound of Violence comes to VOD on 21st May from Gravitas Ventures.