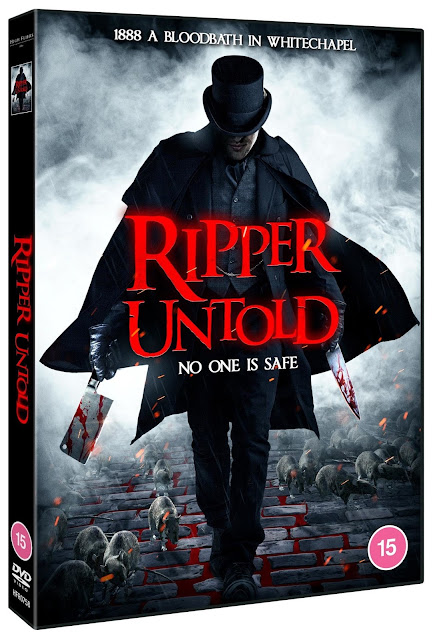 The title for the Jack the Ripper horror film Ripper Untold is apt for it certainly does tell a side to the infamous crime case that has previously been untold, albeit a fictional story that is content to tell its own version of events using parts of the reality as a springboard. There is no problem with it doing things this way and it was still fun to see an overlap between fact and fiction. This was both written and directed by Steve Lawson (Bram Stoker's Van Helsing, The Exorcism of Karen Walker) and tells a competent tale despite using a minimalistic cast.
It is 1888 and the body of a prostitute has been found viciously murdered. On the case is Inspector Rees (Phil Molloy - Dysnomia) who is assisted by the troubled physician Thomas Locque (Jonathan Hansler - Evil's Evil Cousin, Harry Potter and the Half-Blood Prince). As the body count rises, Rees comes under increasing pressure to find the killer, while Thomas becomes more and more concerned with the missing gaps in his memory.

The small cast is very noticeable but it is good filmmaking that this never really eats into the flow of the story. The Police station for instance seems to consist of just two people, Rees, and his ever present Constable (Marcus Langford -  Toxic Apocalypse). These make up part of the very small cast with a total of less than ten. Notable side characters include the tabloid reporter, Stubb (Chris Bell - Haunted 3: Spirits, Haunted 4: Demons, Haunted 5: Phantoms) and the corrupt assistant to Thomas, Dodd (Jacob Anderton - 13 Graves). The acting was mostly decent enough, there were at least one or two who felt less effective, though perhaps more due to their low impact roles that didn't have them do much more than stand still and talk.
Rather than follow the ripper themself this is instead more of a detective story, the film follows both Rees and Thomas and their investigations. The bodies they find are long dead with a couple of blurry flashbacks that don't really show anything too bloody. Separate to the facts of the time there are explanations for things that were never explained. One early example is the discovery of just where the infamous letters the killer allegedly wrote to the newspapers originated from. With films that cover this topic it is always clear there are going to be five victims, here their names have been changed slightly from the real world ones. This clear number helps with the flow of the movie almost splitting it into chapters. A lot of effort is spent telling a clear story, by the films end unlike the real world a reveal has been provided which within the context of the film was enjoyable and unexpected. The atmosphere of 19th century London is established with a moody and sometimes mournful soundtrack, small limited sets that are mainly contained to single rooms or alleyways, and establishing shots of London landmarks from the time.

Ripper Untold is a low thrills horror that nonetheless had me enjoying it. I like the topic anyway and it was interesting to see how this indie thriller got around concessions to budget. As a film to watch on a lazy Saturday morning this was a good way to start the day, I can't begrudge it for that and it was an interesting new take on the infamous crimes of the Ripper. Ripper Untold is due for release on 28th June 2021.
SCORE: