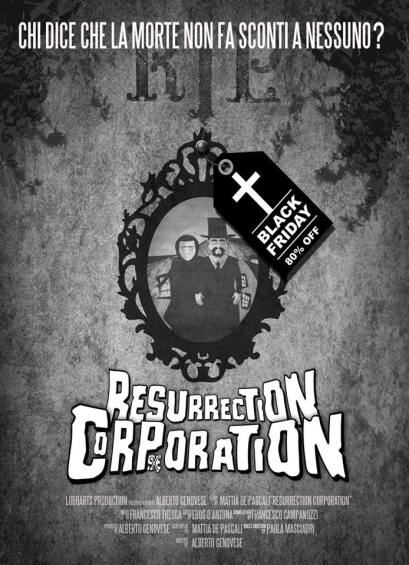 Resurrection Corporation is an Italian animated comedy horror film that was directed by Alberto Genovese (Sick Sock Monsters from Outer Space), with the story and screenplay written by Mattia De Pascali (Beyond the Omega). From the stark black and white nihilistic world the inspirations behind this are not too hard to figure out. The story does have some nice ideas behind it but there were certain aspects that didn't really sit right with me. The version of the film I watched had an English dub so I can't comment on the performances of the original voice actors.
Dottor Caligari has a problem and that is that he is a coffin maker in a town where no one ever dies. This is thanks to the Resurrection Corporation, ran by Potriantow, his company using secret means is able to bring back to life anyone in the town who dies. After his attempts to compete with him fail, Caligari and his assistant Bruta (a woman it is insinuated the Dottor created himself) head away to a remote castle where Potriantow's mentor is said to live. It is there they hope to learn the methods by which Potriantow is able to perform his trade. 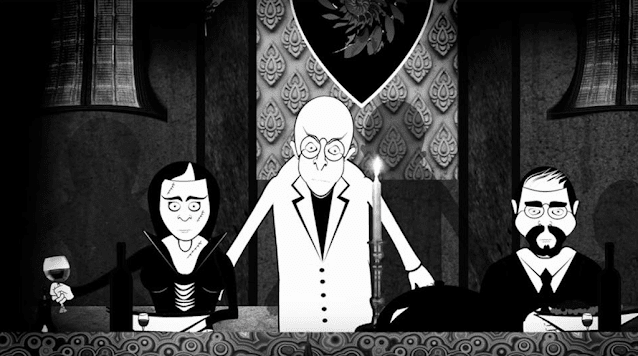 The first noticeable thing about this film is its basic animation. In a post South Park world this isn't an issue and was one area that I think this really got right, there is some interesting directing meaning that everything isn't always shown from side on, but includes things coming into the screen as well . With some of the more disgusting parts (such as a room full of skinned corpses) this reminded me a bit of the style of David Firth. Keeping with that vibe this isn't a children's movie, there is some extreme (animated) violence with characters murdered and beaten including at least a couple of decapitations. I was totally fine with that, what didn't sit so well was the sexual abuse, mainly of Bruta. There was one uncomfortable scene where she is being molested, another bizarrely played for laughs where someone is trying to rape her. I didn't really get this character, she was treated as if she wasn't a real person, and she never reacts in a realistic way to her bad treatment.
As a protagonist Caligari was terrible, he was arrogant, self obsessed, mean and had barely any redeeming qualities. There wasn't a single scene of the film in which he felt like the focus should be on him, nor that he should get the hero's outcome for his role. This made a lot of the story fall flat, as despicable as a few of the people he was up against were, he really was just as bad in different ways. There is action to be found here but it is also very talky, many scenes feature characters stood around talking and talking in a roundabout way that meant they were not actually saying much for all the words. I can't comment on the original Italian but the English dub left a bit to be desired, a lot of the voice actors sounded like they were normal people reading scripts rather than sounding like the characters they were meant to be playing.
The story didn't turn out to be too bad in the end, there was a third act plot twist that I found unexpected which sent story beats in an interesting direction. 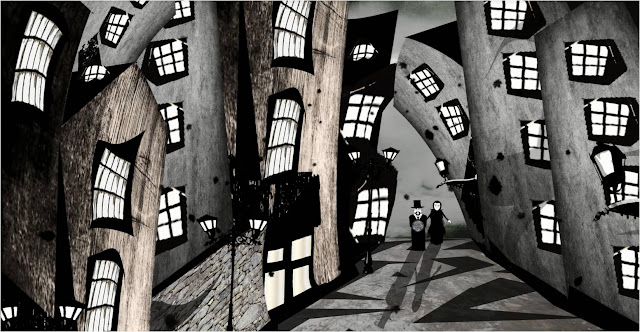 With an unlikeable protagonist, the bizarrely cruel treatment of Bruta and a mean spirited world Resurrection Corporation wasn't the most enjoyable of films to watch. On the plus side the crisp black and white world and the style of animation was very fitting. The three main influences (The Cabinet of Doctor Caligari, The Golem and Nosferatu) were clear to see. To the films credit while I didn't enjoy aspects of the film it didn't get dull, and does feature zombies which are the best movie monsters! Resurrection Corporation can be watched on Amazon Prime Video in the UK and US (here).
SCORE:

Posted by Daniel Simmonds at 15:34