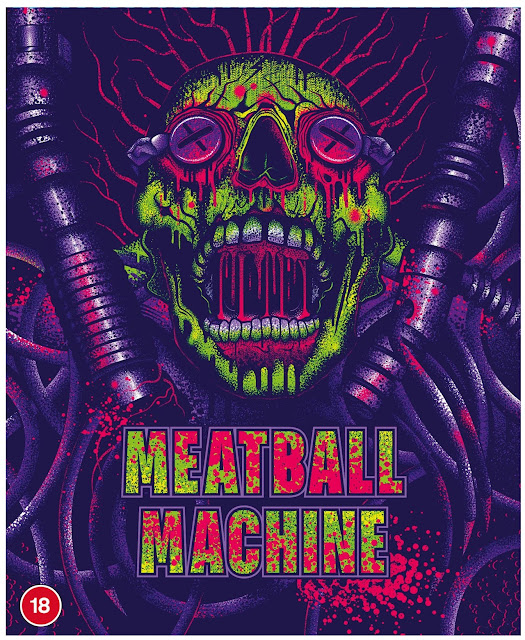 Wow, I can't say I had ever heard of the Yudai Yamaguchi (Abductee) and Jun'ichi Yamamoto (JoJo's Bizarre Adventure: Phantom Blood) directed Meatball Machine before I got sent a screener of it for review. This 2005 feature length was based on the 1999 short film of the same name. The story may be basic but this bloody and violent biomechanical body horror nightmare won me over with its great special effects.

Yoji (Issey Takahashi - Kill Bill: Vol.1) is a lonely young man who spends his time fantasizing about a woman, Sachiko (Aoba Kawai) who works in the building next to his. One day he finally gets a chance to meet her, and discovers she also has an attraction for him. Before things can progress however a strange metal object Yoji found at the dump activates, it attacks the woman before melding with her. He is rescued and the monster escapes. He learns that parasitic biomechanical creatures are secretly taking over people in the city, piloting them as machines and battling each other to the death. Determined to try and save Sachiko, Yoji sets out to find a way to defeat the creature that has taken over her. 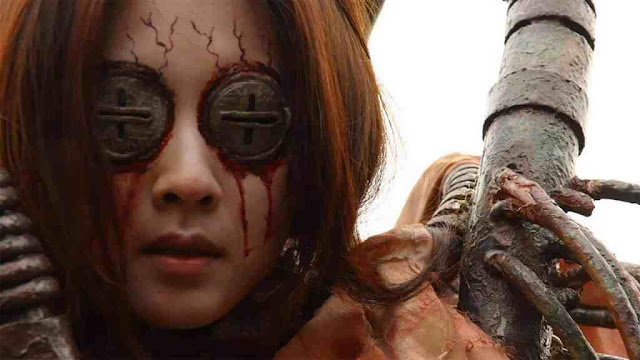 The main draw of Meatball Machine is the biomechanical monstrosities that the possessed humans became, thankfully the special effects and make-up design are fantastic. From the very start this is ultra violent, within a couple of minutes of starting we have seen a man get his head sawn in half vertically, and not long after that a possessed child is in pieces after being hit by a car. People taken over by the creatures have all sorts of painful looking alterations to their bodies, most notably the huge screws that drill down into the victims eyeballs in up close detail! These organic/mechanical creations reminded me of Cronenberg, but dialed up to 11. Much of the film is battles between these creatures, they use sawblades, flamethrowers, bone firing guns and more with which to battle, all looks very cool and disgusting in equal measures. My favourite effect of the film had a humanoid creature bursting out the chest of a character during a nightmare sequence, looked so freaky!

The story is very simple, but it means there is lots of action. As a protagonist Yoji was not great, his pre-discovery times have him as a social awkward, sexually frustrated outcast, and a coward at that. His character development sees him become much more of a tortured hero. This isn't a feel good movie, everything is tortuous and painful with no happy outcomes for anyone. However, there is a rich vein of dark humour to be found, especially with the mischievous parasites that are shown in their cocoons piloting their hosts almost as organic mechs. Then there is a great scene where a man encased in metal is being used as a literal human shield. His constant screams and protestations at what is happening around him did raise a smile out of me, especially as that character deserved everything that came to him. It leads to a final battle that in true Japanese style seemed to go on a lot longer than it needed to. It all culminates in a crazy epilogue that I didn't see coming, which again  showed the films humorous side. 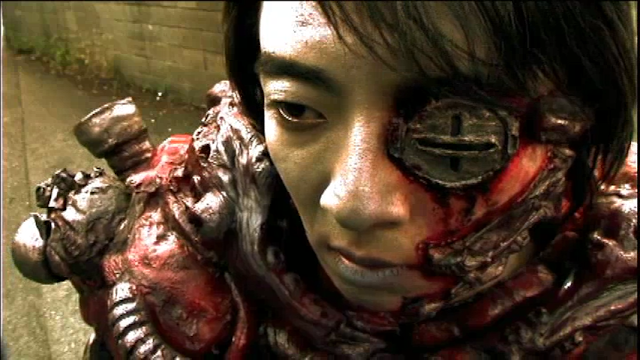 Meatball Machine is an insane movie that felt very Japanese, lots of body horror with great special effects to sell this terror. I imagine watching this with a few beers would really make this a fun film to watch. With no dull moments to be found this just keeps going and going, entertaining from bloody beginning to bloody end. Terracotta Distribution released this on Blu-ray on 12th April, the limited edition slipcase version was limited to just 2,000 copies. The special features include a specially commissioned directors interview, audi commentary from the director, actor and special effects director (Yoshihiro Nishimura), two bonus short films, as well as a making of.