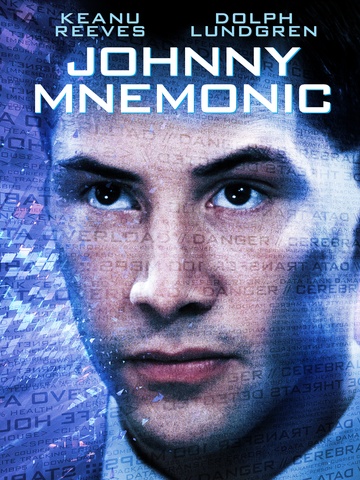 While this blog is very focussed on horror I have always allowed post-apocalyptic films into the mix as they work as horror of a different kind. Lately I have began to also feel that dystopian films are welcome as well. Dystopias are kind of corporate sponsored slow burning apocalypses after all. For whatever reason I had never heard of the 1995 sci-fi thriller Johnny Mnemonic, and after watching it now I am ashamed of that fact. The story and the world in the movie share a lot of similarities with the video game Cyberpunk 2077, that itself was based on a board game (I believe) but was also obviously inspired by elements of this film.

In January, in the far flung dystopian future of 2021(!), corporations rule the world. Keanu Reeves (John Wick, The Matrix) is Johnny, a data courier, someone who has an implant in their brain that lets them store data there. He is convinced by his handler, Ralfi (Udo Kier - Puppet Master: The Littlest Reich, Blade) to do one last job. Two defectors from the all powerful Pharma-Kom corporation want him to transport a whopping 320GB of stolen data. Desperate to earn enough money to restore the memories taken away from him in order to be able to store data in his brain Johnny agrees, despite the size being far more than he is able to safely handle. Things don't go according to plan, the corporations leader, Takahashi (Takeshi Kitano - Battle Royale) orders his private army, the Yakuza to hunt down Johnny, to make matters worse, the data courier is in a race against time to download the stolen data, as the sheer size of it will be enough to kill him within a matter of days... 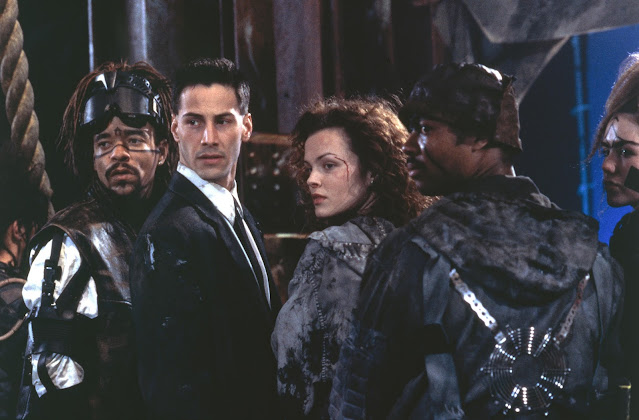 It is hard to say what I would of thought of this at the time, but as I used to be into the action genre much more than horror I think my teenage self would have loved it. Watching it now, especially in the year the film was meant to take place it felt much more entertaining. Ideas of where the internet would end up heading, and how technology would increasingly pervade society were really interesting to see. With regards to the internet, here it is compartmentalised, but it also exists as a 3D Lawnmower Man style world that is interacted with via VR headsets. The internet is represented with some basic graphics, it works due to the scarcity of its use, but one of the final battles of the film includes a prolonged sequence of a Johnny avatar battling a virus protection system, entertaining, but unfair to criticise based on the time this originally released.
With some foresight there is also some humour to be found with what wasn't guessed right, mini discs being used to hold data, and 320GB being considered an insane amount of data amused. Other things felt more relevant, especially when it comes to video calls and technology replacing traditional forms of identification. A fun scene where Johnny uses a chunky cartridge in place of a passport. Currently I'm playing the video game Cyberpunk 2077 you can see the inspirations. In that game Keanu Reeves voices the character Johnny Silverhand, the main plot features a character with a stolen implant in their brain that is slowly killing them, and a Japanese owned corporation is out to stop them. Also the games 'cyber psychosis' felt similar to a technology created sickness in the film.

The entire movie takes place during the night, there are smoky often small sets that create a claustrophobic feel, I felt more shots of the world as a whole would have benefitted the sense of place. On occasion there is a city wide shot but more often than not Johnny bounces from location to location with no showing of his movement. He will exit one scene and then next scene be in somewhere completely different. This helps keep the urgent pace going, but it also made the film world feel less realistic. That isn't to say the sets are not effective, a seedy bar early on, the HQ of the low-tech anti-corporate rebels both had great design to them. 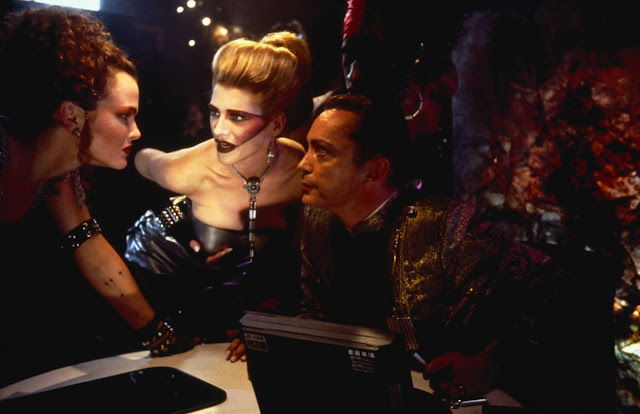 There were a whole load of actors here who were a joy to see. You have Ice-T (Bloodrunners, Leprechaun 5: In the Hood) as J-Bone, Dolph Lundgren (Battle of the Damned, Universal Soldier) as the crazed cybernetic assassin Street Preacher, as well as an enthusiastic Henry Rollins (Z Nation, He Never Died) as the street doctor Spider. Many of these roles might not be high in terms of acting skills, but they all work in this fever dream of a techno nightmare.
There is plenty of action here, and some cool special effects, people are shown dying on screen in lovely detail, highlights being a man sliced into pieces by a laser whip (stand out weapon of the movie), and a man being electrocuted until he bursts into flames.

I don't know how I had never heard of Johnny Mnemonic, but I am glad I finally saw it, it may feel almost comically outdated in parts, but it is a fascinating look at where it was thought technology may be headed, a great example of a cyberpunk world, and a good action film in its own right. To celebrate its 25th anniversary for the UK, Johnny Mnemonic is getting a new Digital HD release on 10th May from Vertigo Releasing. Digital platforms to include Amazon, iTunes, Google, Microsoft, Sky, Virgin and Sony.