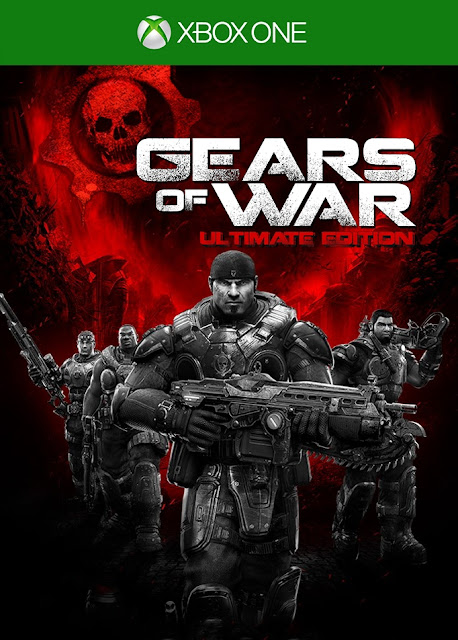 I've recently started playing through all of the Gears of War games and with the very first one in the series I decided to play the newer remastered version that came out in 2015 on the XBox One, rather than the original 2006 XBox 360 version of the game. After the boredom of Gears of War: Judgement I was hoping this would put me back on track and thankfully it did, remaining as fun and exciting as the game I remembered in my mind.

Gears of War takes place 14 years after 'Emergence Day'; the day in which a vast army of monsters poured forth from within the ground of the planet Sera. The battle between these monsters (known as The Locust) and the humans has continued ever since. The game begins with Marcus Fenix (voiced by John DiMaggio), a former COG soldier being freed from prison by his old war buddy Dom (Carlos Ferro). He is reinstated and put in charge of Delta Squad that eventually is comprised of him, Dom, cocky engineer Baird (Fred Tatasciore), and former Thrashball star Cole (Lester Speight). They are tasked with obtaining a resonator. This device is meant to be able to map the Locust's underground tunnel network, it is hoped that by doing this a lightmass bomb can be detonated to destroy their main stronghold. 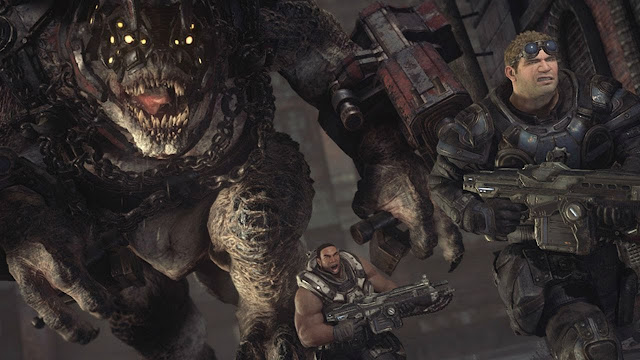 This game is still so much fun to play. The cover based combat never grew tired, I loved the various times you would roadie run from cover to cover, slowly pushing forward, and occasionally getting the opportunity to flank enemies. The game is full of set pieces and a lot more variation than I remembered. There is a driving level, levels set at night in which you have to stay in light to avoid getting killed by monstrous birds, boss fights against huge monsters, there's even a level set on a moving train. This variation keeps the game feeling fresh from start to end, even if the end features a very frustrating final boss. There are a bunch of weapons used throughout the six or so hour campaign but the only one really worth using was the Lancer, this being is an assault rifle with a chainsaw attached to it, and the other worthwhile weapon named 'Hammer of Dawn' which is essentially a satellite targeting system.

While the game can be enjoyed by playing solo it at times feels like it was designed to be played with another person. I don't know if it was a bug specific to my playthrough or if it is a common issue, but Dom, who should have been A.I controlled frequently refused to move from his starting position at the start of a level. There were at least three levels in which he stubbornly refused to do anything at all making the game a whole lot harder. I guess that was preferable to the final boss fight in which every attempt he would charge up to the boss and instantly get killed. Dom sucked to be honest and it was a shame to see the A.I act so buggy. Thankfully Marcus controls much better, but I had some issues where I tried to go into cover in deep combat but inadvertently would vault over the cover instead into the path of enemy gunfire (due to the same button doing both functions). 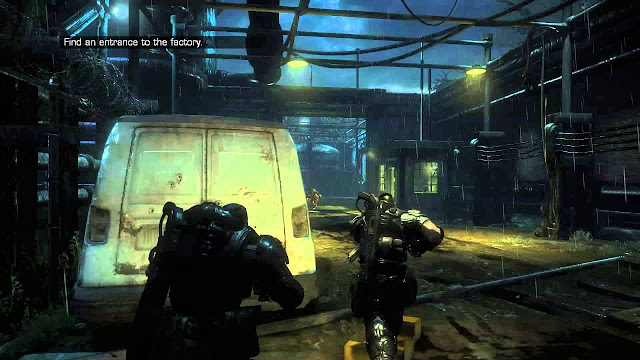 Gears of War: Ultimate Edition looks fantastic, even the 2006 version still holds up visually so the extra detail here was much appreciated. The best thing about the ultimate edition is that it includes a bunch of new levels that originally only appeared in the PC version. While they are the weakest part of the game it was still lots of fun getting to explore some new environments such as a theatre, parking garage and a power station. The story for this game was more enjoyable than you would expect, I liked the smaller feel of having it concentrated around the one small squad of soldiers, the interactions between the meathead protagonists was often entertaining with how gruff and miserable they always are.

If I'm honest I would have been just as happy to play the original 2006 version of this game, but I loved the remastered graphics and it was cool to finally get to play the additional chapters. There are some parts of the game that feel slightly antiquated and the bugs with the A.I really did annoy me, but other than that I had a blast playing this one (and such a great soundtrack!).