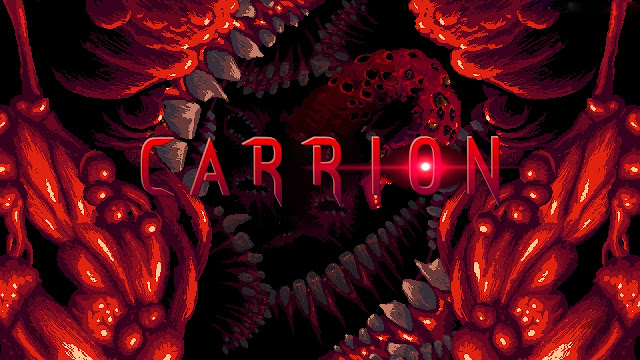 Carrion was a game that sounded so awesome on paper that the moment it was released I snatched it right up. This is a pixel art style Metroidvania (one huge level with upgrades that allow you access to more and more of it) but there is a huge difference to many games of this type.It has been described as a 'reverse-horror game' and by that it means you play as a monster, while humans are fodder for you to kill and consume.

Carrion takes place within a research facility and the game begins with you escaping your containment unit. As to how you got there, that is revealed by a series of flashbacks as you progress through the four to five hour game. The monster you control is a red, amorphous tentacled monster that oozes and rolls around the environment. The many tentacles means you can climb around all the walls and ceilings of the many places you go to. You are able to ooze through vents, smash down doors and break windows in your bid to escape the facility. You start the game quite small and weak, however nearly all the humans you come across are defenceless and can easily be consumed by manipulating a tentacle to bring them to your gaping maw and eat them for health. Upgrades received by collecting your captured genetic code grants you all kinds of cool new abilities as well as massively increases your size. These abilities range from less exciting ones such as the ability to smash vents, to being able to turn into a mass of worms in order to swim through water, turn invisible and even getting the ability to possess humans in order to get them to flip switches and take each other out. 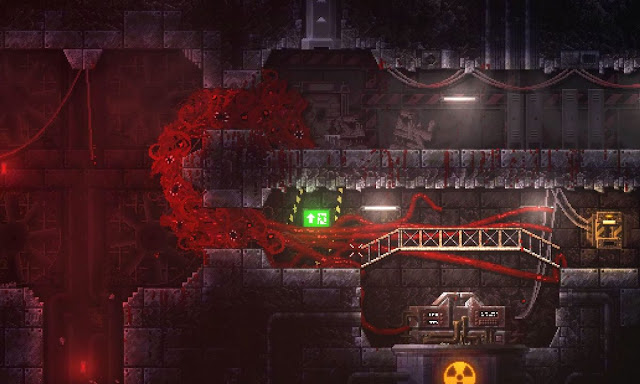 When everything is going smooth this is pure joy to play. The feeling of empowerment as you smash and crush your way through room after room as the humans scream before you is fantastic and is where Carrion is at its best. To put in challenge however you come across automated defences, as well as soldiers who are able to deflect your attacks with large shields. It can be frustrating to be on a (literal) roll and then briskly be annihilated. I understand this was to stop the game being a cake walk but I can't help feeling the game would have been more fun without these sections of tough combat. For all the power you have to wreak havoc you are also somewhat of a glass cannon, able to be annihilated within seconds. The game is a Metroidvania in its design but each section of the facility is still within its self contained area. Each area usually has one new upgrade to discover, and there is very little need for backtracking. The game is designed well enough that you are forever moving forward. This is a relief as the samey looking levels and the lack of a map would have made backtracking very confusing. Often your goal is to destroy a set number of locks in order to open up a new area. As you play through the game these locks become more and more, with simple puzzles required to access the locks. This includes flipping switches, playing with the power grid, and finding your way past sealed corridors.

The pixel graphic style is simple but has a lot of charm to it. The design is dark and oppressive, while the soundtrack is fantastic, as alien and atmospheric as you would expect. A complaint I had was in the lack of variety in the design of the game world. Each section doesn't really look any different from the one before it, it's just labs and computer rooms, vents and industrial areas. I found myself frequently almost bored at the lack of any thrills in the design of the game world. The story is basic but it is told well, and I was surprised to find the game ends on a pretty damn good note, similar to many downbeat horrors, this left everything open ended in the most perfect of ways. 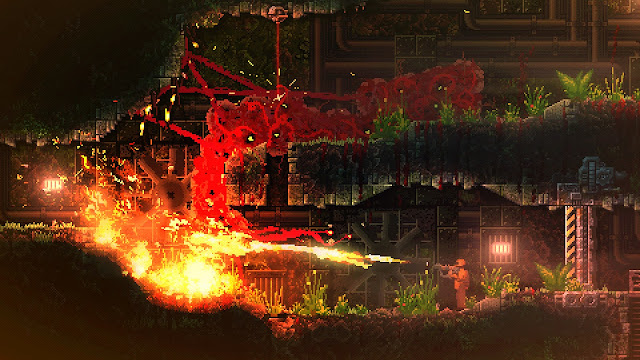 Carrion is a video game that sounds better on paper than in execution. I think if it had more varied levels and a more tough monster to control this could have been something special. As it is it is moody and creepy but no amount of nice looking graphics and sound can make up for the feeling of sameness that pervades this from beginning to end. A fun, if brief time to be had here marred by occasional moments of high frustration. The game also includes some free DLC in the form of the Christmas themed Carrion: It's the Greatest Time of the Year!