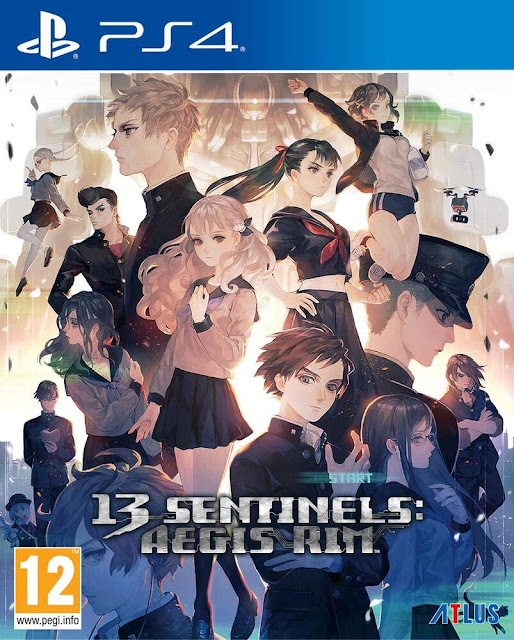 I had heard a lot about the Japanese adventure game 13 Sentinels: Aegis Rim, enough that despite not being the sort of genre I would usually play I knew I just had to see what the fuss was all about. Initially released in Japan in 2019 before finding a worldwide release last year, this combination of visual novel and turn based strategy was a surprisingly winning mash up. I will keep things vague in relation to the fantastic story as the less you know the better it is.

The game is split up into three areas, Remembrance, Destruction and Analysis. Destruction takes place in the present, thirteen teenagers piloting giant mech suits (called Sentinels) desperately attempt to defend a Japanese city against hordes of invading kaiju, thought to be alien invaders from space. Each of the 30 or so missions take place in a different area of the city with up to six characters able to be chosen for each mission.
The look is kind of basic, a zoomed out view of the city space with both mechs and invaders represented as quite simple looking video game style icons. The 13 Sentinels are split into four different categories, there are three melee based ones, their attacks favouring close combat, and able to fire flares to disrupt missiles and air borne kaiju. Long range Sentinels rely on long range attacks surprisingly, such as missile storms, and the ever useful railgun. Flying Sentinels are weaker but have great maneuverability around the map, while the final class is an all rounder who have access to parts of the other three classes abilities. Using attacks drains the EP metre, once that is depleted you have to defend to recharge some of those points. If you take too much damage you can exit your Sentinel which then recharges back to full health over a turn, you are very vulnerable to enemy attack while out of your mech. A cool mechanic is that being in a mech drains you, so you are not able to constantly use the same character over and over again each battle, instead you have to constantly change around the line-up to give out of battle characters a chance to regain their energy.
The enemies are far more quantity over quality, many of the lesser ones can be killed in a single hit. You get much larger boss style enemies, and as the game progresses tougher enemies in the form of kaiju Sentinels show up. Killing these grants you XP which can be used in between fights to buy new weapon attacks, increase your base stats, and make your attacks more powerful. Destruction can be played a mission at a time or you can keep on going, it is up to you how you mix and match this and Remembrance.  Keep in mind there are far more story missions than battle missions, weirdly you get access to 10 extra battle missions after the game is over, with the imbalance it would have been nice to have these before the games end to make things feel more even. 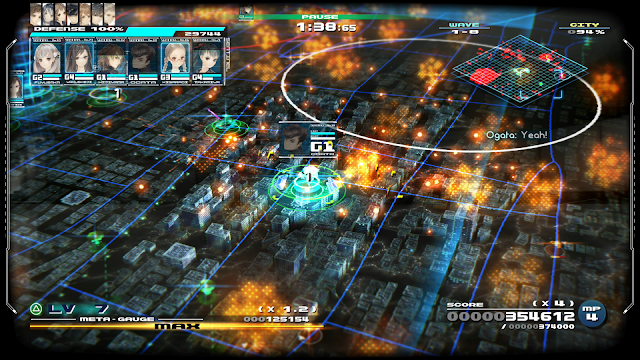 Remembrance is where you will be spending the most of your time over the 45 hour playthrough and is beautiful in its art design. There are eventually 13 characters stories to play through, each of which has roughly five different chapters, these take roughly 20 minutes per chapter to complete. The stories all take place prior to the events of Destruction and show how each of the pilots came to join the final battle. The story is crazy, I've never seen so many twists and turns in a video game before, there is twist after twist after twist from start to finish. The stories all overlap with each other, but they tell self contained stories. To show some of the variation, one character is stuck in a time loop, each chapter has them trying new things to try and escape the time loop. Another has you tasked by a talking cat (potentially the devil) to shoot fellow students with a 'magic' gun, this one was quite dark. Other examples include a story that has you as a rich kid who discovers one day that a popular idol is able to communicate directly to him through his TV, and one about a guy with a gun who wakes up next to a corpse with no memory of how he got there.
These stories are visual novels, I expected then that this would be static screens of text. Instead you control a 2D character on screen, exploring locations (mainly a school). It isn't much of a spoiler to say time travel is involved, most the game takes place in 1985 but you also spend portions in 1945, 2025 and 2065. A lot of the time these stories are fun to play, with a few exceptions. Ryoko Shinomone has to frequently take pills to stay lucid, this became a tiresome game mechanic. Takatoshi Hijiyama meanwhile spends most of his story looking for a guy at the school over and over again, this was very boring and annoying.

Analysis is the final part of the game and is split into two. The timeline part shows a complete list of events as they happen. As you play through the story mode these get filled in. As stories take place all over the place this is a good way to piece together exactly the order that the whole story occurs. The other part is the index, you can use points earned in battle to unlock information about key characters, places and events, all very interesting. 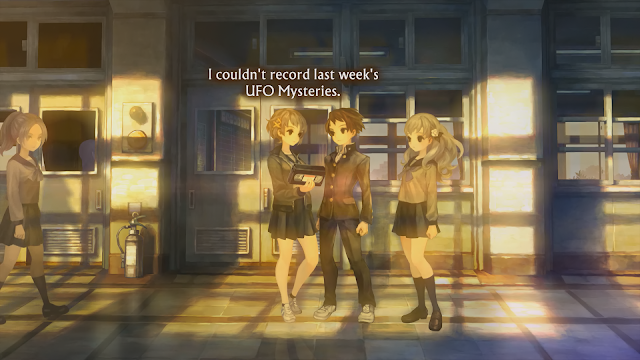 I skirted around much of what made this game so great. On paper it doesn't sound that interesting but the story is really the selling point here. There are so many twists and revelations that it frequently amazed with how convoluted and clever everything intertwines. The battle sections might look basic but they were a lot of fun to play, and quite thrilling despite the simple look. There really isn't anything else out there quite like 13 Sentinels: Aegis Rim, this is really something that you need to play to understand the magic at work, give it a try, you won't be disappointed.

Posted by Daniel Simmonds at 02:54