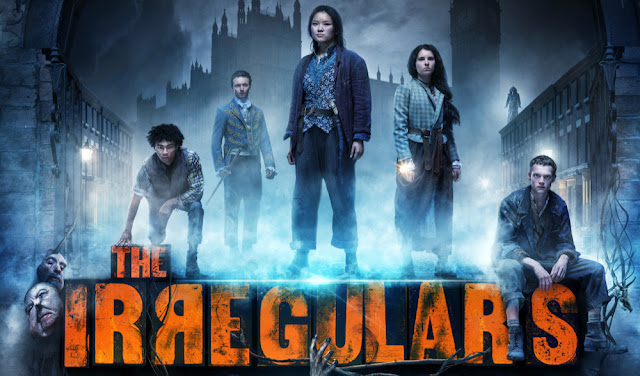 My Netflix queue is very long with other 300 plus films and programs wandering if they will ever get watched by me before they covertly get dumped from the streaming platform. Thankfully my best friend has no such patience for order and decided we would start watching the horror tinged Sherlock Holmes supernatural spin-off, The Irregulars. I'm glad I did as I really found myself getting into this show, impressed by both its cast and its quality look.

This takes place in Victorian London, more specifically one in which Sherlock Holmes and Dr. Watson inhabit. A group of street teens, made up of Jessie (Darci Shaw), Billy (Jojo Macari), Spike (McKell David - Black Mirror), and Bea (Thaddea Graham) get caught up in investigating a series of supernatural events breaking out over the city. A tear in the fabric of reality has opened, and through this various nefarious townsfolk are getting imbued with magical powers. Joined by Leopold (Harrison Osterfield), who is secretly a Prince, the friends are tasked by Dr. Watson (Royce Pierreson - The Witcher, Thor: The Dark World) to discover where the tear is located so that it can be closed. To do this they use the powers of Jessie who is able to travel into the minds of people, and who herself is being guided by the benevolent 'Linen Man' (Clarke Peters - Jessica Jones, John Wick), a man with similar powers to hers who she meets in her dreams. 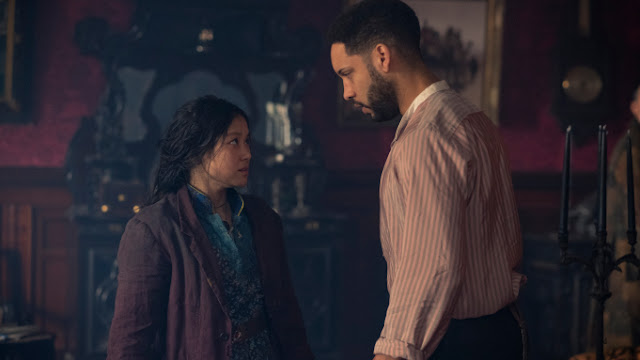 The Irregulars is made up of eight episodes, each of which is roughly fifty minutes long. There is an overarching plot going on but many of these episodes feature a 'monster of the week' type self contained situation. With people getting supernatural powers it means each episode can have the friends trying to stop the latest afflicted character. It begins with Chapter One: An Unkindness in London which is about a man with the power to control birds. This really set the tone for the show as a whole. This is Victorian London and its represented in a way that is more filmlike than realistic. This is a world where adults are for the most part nasty and abusive with no time for children, but also a world where the cast exist without much fear of anything that bad happening to them (pre investigating magical murderers that is). It was refreshing to have so many non-white actors in a setting such as this, there may be a lot of horror in this world but it appears to be a non-racist alternate reality. Also adding to the fresh feeling is the soundtrack that uses modern music. Lots of period programs use this method now, I think it all began with The Great Gatsby. To begin with I was a bit dubious of the acting, but by the end of the first episode I was fully on board. This episode also clearly shows The Irregulars isn't going to skimp on scenes of horror when need be, best summed up in episode one with the image of a woman in the aftermath of getting pecked to death by ravens.

The special effects and make-up were always good, this is something apparent throughout the show, they work gruesomely well. I think the best example was during Chapter Four: Both the Needle and the Knife in which the protagonists are trying to track down a shapeshifter who cuts the faces off of her victims. Elsewhere I enjoyed the look of the nightmares and dreams that Jessie has, some nice visual effects to set these apart from the real world. The visual look of London is represented well, most episodes feature a couple of key locations that keep things feeling self contained without feeling like they are sets. The best for doing this was Chapter Three: Ipsissimus that took place at a country estate. This was one of my favourite episodes, the friends magically trapped there, up against an unidentified killer who uses the power of tarot cards to alter the world around them. The core cast of characters were all likeable, some get more time for development than others, especially Bea who is the one with the most screentime to her. They may be very set in their roles (Billy the muscle, Spike the talker etc) but they even acknowledge this and play these roles in a way that was fun. I loved the idea of having this set in the world of Sherlock Holmes (one in which Holmes and Watson's successes are far in the past) but having those characters very marginalised. I also loved the mystery of finding out just what connection the teens have to Homes and Watson. Watson in particular stood out, Pierreson's portrayal makes him into almost an antagonistic force, far removed from the usual good guy feel you get for him. 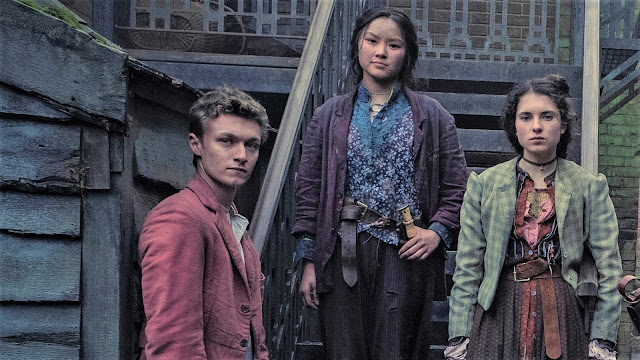 There is enough mystery that me and my friend were hooked. An initial lazy love triangle subplot is thankfully shortly dumped. After this though I was really invested in finding out just what occured in the past. All of which is tied up by the end of Chapter Six: Hieracium Snowdoniense. This left the final two episodes to be a split season finale, it was good, but with the questions to most the overarching story revealed by that point it lacked the surprise and revelations of what had come before. I also didn't think the on screen portrayal of London falling into chaos was that well represented, mainly shown by background characters running around in various scenes. The story is tied up enough that this could get away with not having any more seasons, I kinda hope they do though as this was a well made and fun show to watch.

The Irregulars was a surprise hit with me. I enjoyed the (admittedly not that complicated) characters, and I liked the variation of the episodes as well as the very melancholic and sorrowful tone of the main story. It succeeds in making you empathise often with many of the villains here. At eight episodes this is definitely worth a watch, it doesn't overstay its welcome, nor does it feel rushed. The Irregulars is currently streaming on Netflix.

Posted by Daniel Simmonds at 10:44