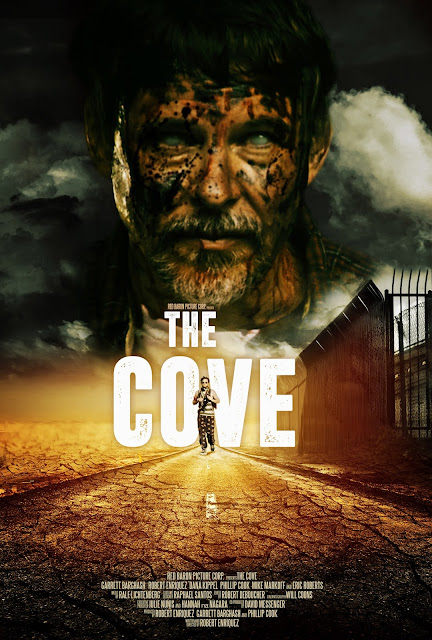 The Cove is a post apocalyptic indie movie that was written by, directed by, and stars Robert Enriquez. It happens to be the second post apocalyptic film I have seen this week (the other being A Feral World) and has some vague similarities. What it does have that that other film didn't is zombies, these take a back seat to the more human story going on.

After a deadly pandemic swept the globe those infected turned into zombie like creatures who exist only to eat. In this post apocalyptic world Cairo (Garrett Barghash) is journeying in search of a near mythical settlement known as 'the cove' which is said to offer true sanctuary and protection against the perils of this dangerous new world. His journey brings him to a marina where a former soldier named Solomon (Enriquez) lives. Luckily for Cairo this man appears to know how to get to the cove, the only problem being a group of pirates led by the sadistic Luther (Mike Markoff - Death Squad TV series) who also want to find this refuge and will do anything in order to get that information. 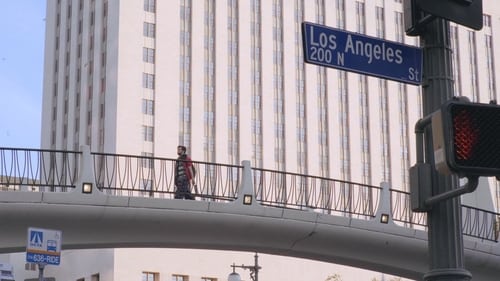 The majority of The Cove takes place around the marina location, it is only the first act that felt more like a typical apocalyptic road trip. The story was interesting in that it appears to be towards the end of a larger story. It is insinuated that the apocalypse itself is nearing its end, Solomon's way of life is coming to its conclusion as the government is apparently nearly ready to take control again. It is also coming towards the end of the fight between Solomon and Luther, the antagonist only has four men under his control, the skilled ex-soldier Solomon having already taken out the majority of them previously. This gives the film a very low key feel to it, there is no large world changing story going on, more just a small chapter in the world of the film. That was a perfectly good idea for an apocalyptic movie.

Often The Cove falls back into scenes that play out in silence, save for the mournful soundtrack, this idea is used frequently, whether it be Cairo and a friend hanging out on a beach, Cairo and Solomon in a small boat, or no end of other scenes. Sometimes this led to confusion, a slow montage of the two protagonists trying to sail that boat ends in them abandoning ship, but due to no sound except for the music it became slightly confusing to work out what was going on. I don't know if the camera was purposely constantly bobbing up and down to simulate the movement of the sea but this was constant, at times I felt it might have been nice to get some more static shots, especially during some of the more quieter moments.

The acting was decent enough, there wasn't much character development but the roles people played were not bad. I thought Luthor was a decent bad guy with a twisted kind of motivation, even if he seemed more bark than bite more often than not. There was one flashback sequence (with a guest appearance by Eric Roberts - The Dark Knight) that helped give a bit more to the character of Solomon. The other bad guys barely got any dialogue, but as generic bad guys they looked the part. Cairo was less successful, he seemed to be pretty useless at everything and never really improved too much, though does get a couple of scenes to redeem himself in the eyes of the viewer. There were not many action sequences, and even less featuring the undead. The later are very much a background nuscience, something to be used as a tool rather than overwhelming threats. They have milky looking eyes meaning their eyesight is terrible, unable to make out anything that isn't moving. Their appearances may be brief but I enjoyed how they were utilised almost like environmental hazards rather than actual threats.

Obviously being a huge zombie fan I was always going to wish for more of them, but it was cool to see them here in the first place. The Cove makes uses of its limitations by telling a story more about characters than about the larger world itself, and while it may be relatively low thrills it wasn't a bad entry in the genre as the low thrills also gave a strange chilled post apocalyptic vibe. The Cove releases on April 26th in UK and Ireland, check out the trailer below.