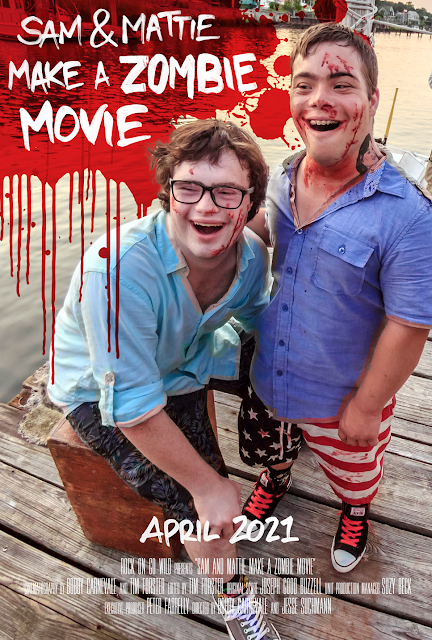 I knew as soon as I was offered the opportunity to review the feel good documentary Sam & Mattie Make a Zombie Movie that it was something I needed to see, after all, it had zombie in the title. This is a behind the scenes look at 2016's Spring Break Zombie Massacre which sounds like a typical low budget zombie flick until you take a closer look and see that the idea for it came from two best friends with Down syndrome (who also star). The documentary not only does what it set out to do, but also includes the entire 45 minute zombie film itself, albeit with some concessions that hampered my enjoyment.
The first half of this is pure documentary, following the two friends as they, along with the help of family and friends go about bringing their dream of starring in a horror film to life. It was inspirational in how new to it all a lot of the people where. It charts the early days of a successful Kickstarter campaign all the way up to the filming and screening of it all. Rather than make this a film about Sam and Mattie this is about their dream. As such there isn't much backstory given to them and so it becomes much more interesting for a horror fan as the doc revolves around the creation film. This is designed to be a feel good doc, something which was nice and chill to watch. It meant the problems around creating this (especially during the shoot) are side lined and only really referenced in a small five minute segment towards the end of the doc part. Weirdly this as a whole reminded me of One Cut of the Dead, but reversed and actually real rather than fabricated. 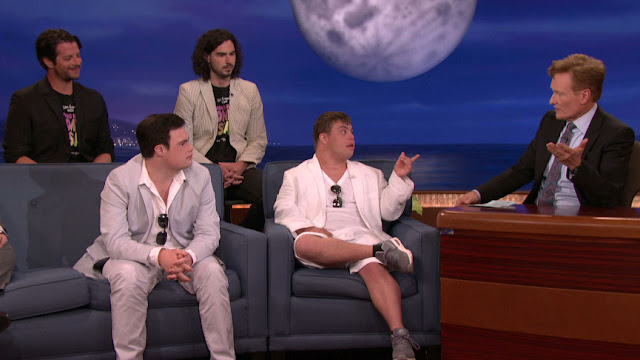 It was hinted at throughout the first half that the film Spring Break Zombie Massacre would actually be shown in its entirety later on. I hadn't expected this and so I couldn't wait to see what the finished product would be like. An issue I had with this part is that the documentary part can't help but keep interjecting. On around three or four occasions the film pauses to give cutaway segments giving more details into the importance of a scene, whether that be getting product placement, or what a scene meant to the two friends. For a film that was already hard to follow these frequent cutaways felt quite intrusive, I can't help but feel there could have been a way to stick these at the end rather than interrupting the movie.
So what of the movie itself? I was expecting something very indie, and not to be rude but many indie zombie films seem to lack much soul to them, much like the undead who inhabit them. Sam and Mattie play the protagonists and this is very much a power fantasy. In the movie they are the two most popular kids in school, all the women love them, and they excel at everything they do, whether it be playing instruments or skateboarding. The synopsis is that when they were babies the devil appeared, and after being insulted by their father he vowed to ruin his family's life. With the brothers grown up the devil has returned, and has recruited some bullies who had issues with the two, transforming the bullies into zombies, demons, and zombie-demons.
The story was purely done by Sam and Mattie and is bananas, it is all over the place with subplots and incidental moments that go nowhere. That isn't a complaint, I loved how random elements of this felt, kept things constantly fresh. There is a lot of life in it, and it was genuinely enjoyable to watch. Maybe if the tone the two went for had been serious this would have failed, but this world, even with murderous demons and zombies is a light hearted place. This isn't so bad it's good, it's good because of the way it has been put together. The film never takes itself seriously and is full of moments that actually were legitimately humourous. One such example is that the devil has a vendetta against the family purely because the father told him to 'grow up', love it.
On the subject of the devil, he has the best costume design in the whole movie. A lot of professionals offered to work for free on the film and it shows. I loved the look of the devil, and he is perfectly played by Johnny Collins who hams up all his lines in a fantastic way. The zombies and demons also all look great, over acting with exaggerated facial expressions and movement is the order of the day and again it all just works. Add in some unexpectedly gory moments, such as the devil strangling a woman to death with her own intestines, and Mattie's character literally pulling the head off a zombie and you have a pretty cool movie whose limitations just make it all the more endearing. Not endearing in a sympathetic way due to the two friends condition, but endearing in that you can see the heart that went into what was obviously a passion project, and the everything but the kitchen sink approach worked wonders. Where else can you see people flying through the air on jet packs represented on screen by cardboard cutouts of clouds on sticks being waved around in the background? 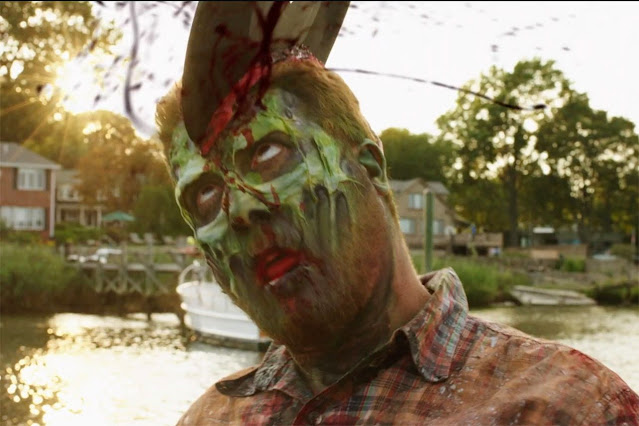 So Sam & Mattie Make a Zombie Movie is literally a documentary of two halves. I enjoyed the actual film more than the doc itself, but both were charming and feel good to watch. My biggest complaint is the frequent interruption of the movie, but seeing how I didn't even expect to get to see it in the first place that's not that big a deal. Sam & Mattie Make a Zombie Movie premiered on April 6th and is available on Cable VOD and Digital HD. I need to see if I can find the actual movie to own for myself.
SCORE: