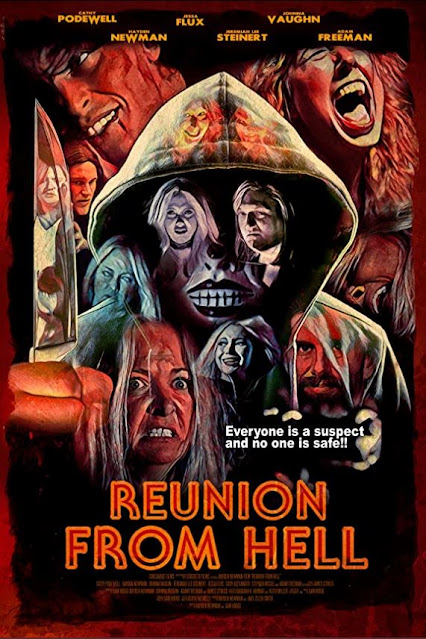 Reunion from Hell is a slasher that was directed by Hayden Newman, with Sam Hodge as co-director. Both these people had a multitude of other roles, Hodge for instance was the director of photography, the editor, principal camera operator and composed the original score, while Newman starred in the central role of Riley. For the film's inspirations it has looked back to the classic slashers of the 1980s and trundles along at a pace that felt very similar. By using so much of what has came before however it maybe left itself feeling a little devoid of original ideas.

After the death of his friend at the hands of a home intruder, Riley (Newman) returns back to his hometown he had left suddenly many years earlier after the death of his father in a car accident. He reunites with his old friends, as well as his mother, Laurel (Cathy Podewell - Night of the Demons) and younger brother, Brady (Jeremiah Lee Steinert - The Hag Witch). After another friend is discovered dead in similar circumstances Riley realises that the killer is going after him and his friends, and that this all seems designed to hurt Riley specifically.

It isn't hard to see what sort of previous slasher films have influenced Reunion from Hell and this leads to many parts feeling and sounding rather familiar. The prologue for instance is pure Scream, with a victim being taunted over the phone by a killer wearing all black, aside from his face that is covered with a white mask. The soundtrack, especially at this part is like an off brand Halloween theme, and that continues into the intro credits that play out over a black background, and with a text style that looks very similar to that franchise. After this violent beginning the film takes a step back with the first hour of this ninety minute feature containing three evenly spaced kills. Of course for the third act, as is the way with slashers the kill count really ramps up.

The kills are all via stabbings and there are some nice moments here of people being slashed open in various ways, including a nice looking throat slash, and some nasty achilles heel slices. There is a decent amount of blood, these kill sequences were the best part of Reunion from Hell. I thought the killer's mask looked kinda cool, a white mask that had a smiling face painted on it. As for the killer though this was no hulking brute, instead he looked lean and not really that intimidating. Due to being dressed all in black this killer was able to have a few effective scenes of him hiding in the back of the shot with only the mask visible in the darkness. 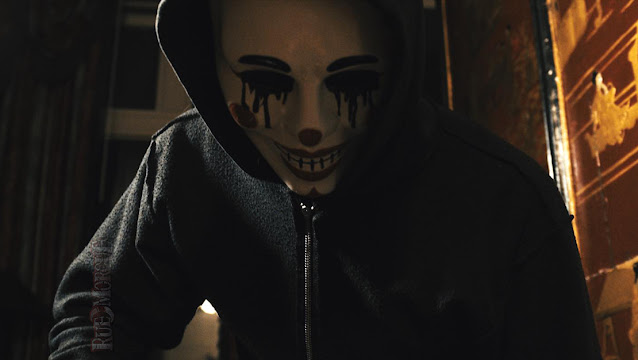 The biggest change up from films of old is that the primary protagonist is a man, and a gay man at that. While there are female characters it was refreshing to have a male lead, and one who seemed quite flamboyant in the way he carried himself. The character was full of drama and self importance and so I'm sure he was secretly pleased that the killer's rampage seemed focussed on affecting him. Outside of the kills there is lots and lots of characters just sat around bickering with each other. There isn't a lot to these people, but there are some nice backstory moments, specifically on the death of Riley's father, and various friendships and relationships the characters had previously had. My problem with the story in general was how closely it all sticks to the genre, there seemed to be no surprises, the reveal of the killer was obvious, even if it also led to a frustrating moment that is never explained and seemed to be there just to briefly throw the scent off of another character. Even this element was an idea borrowed from a previous classic slasher.

If you are a big fan of slasher films then indie flick Reunion from Hell will satisfy that particular itch. I enjoyed it but wish it had done more to carve out its own identity rather than borrowing ideas from other, better slasher films. Bayview Entertainment have acquired U.S distribution rights to Reunion from Hell.

Posted by Daniel Simmonds at 15:40