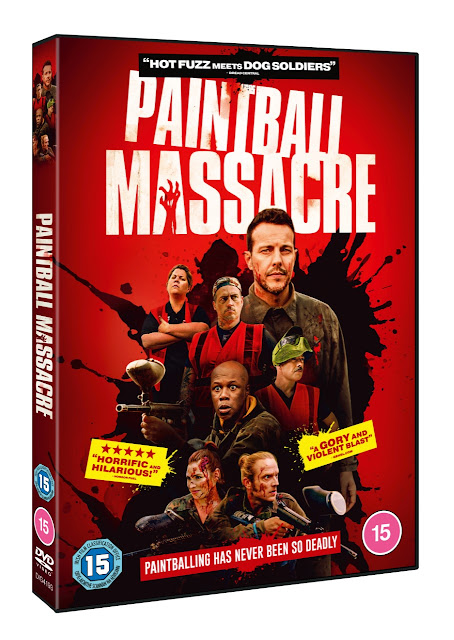 Paintball Massacre is a British comedy horror film that sounded like a cool idea, yet I am always dubious about those types of films as bad humour can really damage the enjoyment of a film. I was pleased to see however that while there are darkly comedic moments the general feel of this is far more geared towards the horror side of things. This was directed by cinematographer Darren Berry in his directorial debut, with the story written by Chris Regan.
A bunch of old school friends have headed to a high school reunion, many of whom haven't seen each other since leaving school a decade or so back. Jessica (Cheryl Burniston - This Camera is Broken) didn't have many happy memories of her school days so only agreed to go as her fiancé Simon had wanted to attend. When she learns he isn't going to come she plans to leave but a series of events leads to her not only staying at the party, but being roped into going paintballing with the reunion group the next day. At paintball the reunited school friends are all put on one team, things are going fine until they discover the team they are meant to be up against have been massacred. Armed only with paintball guns the group must protect themselves against a masked killer who seems determined to kill them for reasons that increasingly seem quite personal. 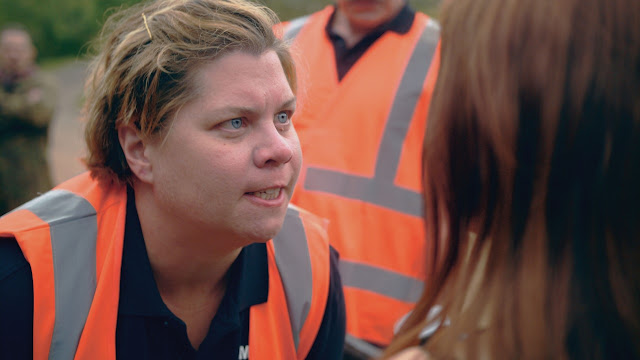 Paintball Massacre is a good horror film, I enjoyed it a lot more than I expected to. Partly this was due to the low use of comedy, I appreciated that the humour didn't overshadow what was going on. The humour is mostly dark and leans more towards a funny script than visual jokes, such as Lauren ((Natasha Killip - Slasher House 3) commenting that she hopes their ordeal is over soon as she has a nail appointment booked for the afternoon, the stoner character constantly referring to the Fast and the Furious movies as a comparison for what is happening,  and of course the great line where someone is described as a 'fat turtle'. The killer in between murdering people is armed with a paintball gun, which leads to several ineffectual paintball battles between groups of characters and their attacker, that came off as bizarre and pointless in the best way. For me it led up to the best line in the movie when Tommy (Lockhart Ogilvie who has been a stuntman in such films as Dracula Untold and Level Up) exclaims "This is fu*king stupid! We're playing paintball with a maniac!" In context that was a hilarious line.
The story seems basic, a typical revenge horror as it is revealed all the bad things the characters have done in their past that might have made them a target. Despite this typical storyline I found it to be very well told. The characters may be a bunch of school stereotypes, such as Jessica having been the clever kid, Nathan (Lee Latchford-Evans from the pop group Steps) being the nerd, Lauren the pretty one, Sara (Aoife Smyth - Macbeth) the stoner etc. These stereotypes are improved upon by the characters now all being grown up. It was interesting how some of them still fitted their stereotypes while others appeared to have grown out of them. The casting was great as it really did feel these were all people who had a shared history together. The scene where Jessica first sees all her old classmates really did feel authentic. It is because of the characters that the simple story became much more interesting and engaging to me. I have to add that I found the somewhat ambiguous ending to be kind of frustrating.

This indie film was shot on a micro-budget of 100k and so there had to be budget concessions somewhere. Sadly this becomes most apparent with the special effects which are never amazing. That isn't to say the many kills here aren't inventive, with many of them based on the particular job the victim had (such as an estate agent getting impaled with a 'For Sale' sign) it was a joy to see how each person would face their demise, they just never looked particularly impressive with the idea better than the execution. There was even one on screen character death that I didn't realise was a death, until several scenes later and there was no sign of them. Then there was an apparent deep hole a character fell into which to me looked easily climbable for the other characters with him, instead they all leave to try and find a ladder. The death scenes were inventive but to me a fair few were never sold that well on screen.
Paintball Massacre may have flaws, but it was also a lot of fun. The actors breathed life into the various characters they played, the soundtrack was at times fantastic, and the kills many and varied. Paintball Massacre is due for UK release on 5th April on DVD and Digital thanks to 4Digital Media. It can be ordered from Amazon.
SCORE: