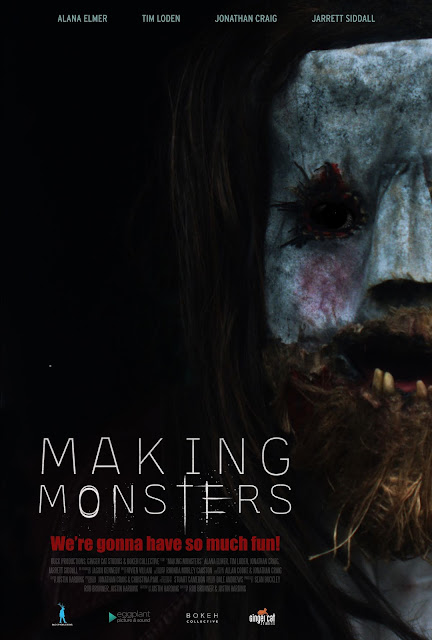 It is always good to come across a movie that is unapologetic in its drive to stay true to whichever genre it happens to inhabit. Such is the case with Making Monsters, directed by Justin Harding (Latched, Kookie and also on writing duties here) and Rob Brunner, this horror never pretends to be anything it isn't. When the stakes become raised for the hapless protagonists, things take a turn for the nasty and stay that way all the way up to the end credits.

Chris (Tim Loden - Bloodlines TV series) is a famous social media prankster with millions of subscribers online. His videos mainly take the form of him scaring his fiancée, Allison (Alana Elmer - Latched, Kookie) in various ways, usually by disguising himself as a killer. One day they meet an old friend of Chris' who invites them to come stay at his property, it's a converted church out in the middle of the country. The couple arrive there to find the friend is away on business, however his boyfriend, David (Jonathan Craig - Day of the Living?) is there and tells them he will look after them. After a night of wild partying full of drugs and alcohol Chris and Allison wake up to discover things have taken a change for the surreal. It appears to somehow be four days later, the power is out, their belongings are missing, there are hidden cameras found in the house and David is nowhere to be found... 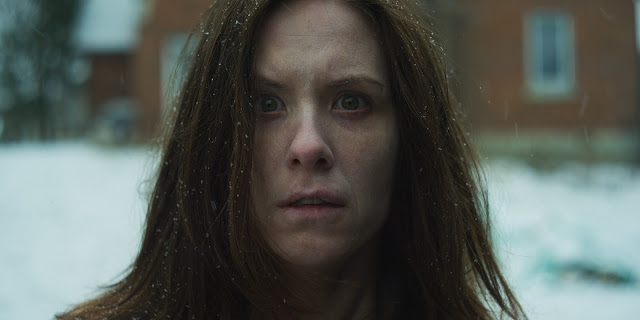 I often try and avoid reading the synopsis of a film before watching it, I like to be surprised and not be clear on the way a movie is going to progress. This happened with Making Monsters. The prologue features a masked maniac pursuing a naked man across a field before shooting him and killing him. This was at odds with the film's first act which, remote location aside seemed far removed. I guessed this would be a home invasion movie but it never really approached that genre, it had more in common with something like My Little Eye. With a film like this it would ruin the surprise to go into much detail as to the specifics of what was going on, so I shall try and dance around that. The first act culminates in the wild drug party the trio have, and that was wonderfully shot and edited, featuring some lovely distorted scenes of Allison staring into a mirror, with the camera shot from the mirror's perspective. There was a lot of energy in these scenes and it paid off as despite the craziness it was the calm before the storm. From act two onwards is where the horror begins in earnest. It seemed to be giving a strong anti-drugs message, as when the two come to after their night of binging the after effects of it all are horrific for them. Allison in particular as she keeps hallucinating a monster in the house, which is at least partly explained duer to David's day job as a monster-make-up artist, and so the property is full of monstrous busts and suits.

The actual message seems to be more about how the online world can so easily make monsters out of the most normal people. Being anonymous gives people the power to be removed from how they act and the things they choose to watch online. It was fitting that Chris who made his fortune scaring people is now the one front and centre of his own nightmare, even if his one is far more real than what he had been doing. The characters of Chris and Allison alone hold much of the film's runtime, though it was always a given that the masked killer from the prologue would be making a reappearance at some point. You would expect Chris to be an arrogant person, and that is true to a degree, it was Allison who was the more interesting one. The character also gets the best scenes with a repeated camera angle taking on the appearance of someone running up to her as she stands wild eyed screaming. Elmer does fear well as however many times the same method was used she always looked terrified, which for a horror film was a good thing. 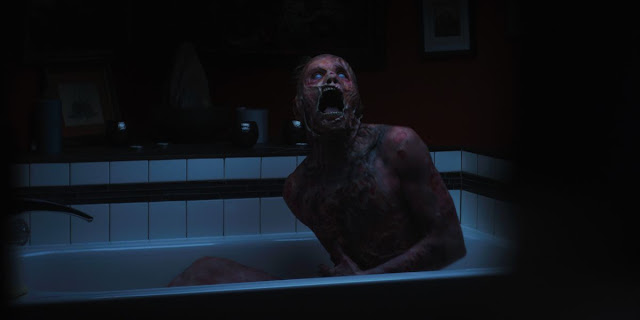 The special effects are used sparingly but never failed to look effective, there is blood but it is reduced to appear more realistic than if characters were covered in gore. When the special effects do appear they make for some nasty looking moments. This film isn't feel good, there is an ever growing sense of peril and so at times it can be a hard watch, especially when it is nearing its end and it seems like there could be no possible way out. I liked how the film kept you guessing for the longest times as to the nature of the threat the duo face, as they uncover clues as to their predicament so too does the viewer. It was cool how camera angles presented to the viewer are then distorted later on in the film to give them a meaning that was hidden at the time. Making Monsters came out on Digital platforms on March 26th thanks to Samuel Goldwyn Films.