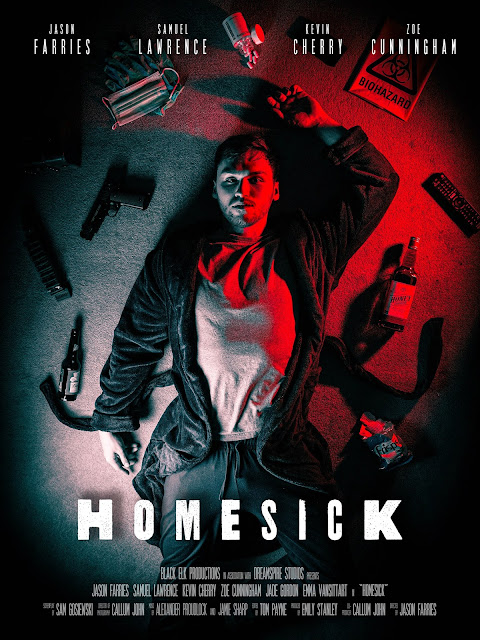 With the Covid pandemic still ongoing and still affecting so many people around the world I'm not sure if people are really in the mood to watch films about the topic. On the other hand though this is a unique time to be alive in, and there is something kind of neat to be able to watch a film about the pandemic and on some level relate to the storyline going on. Lockdowns and social distancing has led to filmmakers having to adapt to the new circumstances, this has led to many films popping up over the past year that feature a much more reduced cast. Whether it is anthologies like The Isolation Horrors or short horrors like Shane Ryan's Autopilot these have all altered the way they work to make something that can affect people more by process of recognition. The Jason Farries (The Voodoo Man, Tommy) directed thriller Homesick is another that borrows its ideas from the real world, but at nearly two hours long perhaps outstayed its welcome a bit.
The pandemic has begun and so a student (Farries) has returned home from university to his parent's remote house in order to abide by the new lockdown rules. His parents were away on holiday on the other side of the world and have been unable to get back, and so the student finds himself truly isolated. At first he has plenty to do, but after discovering he has contracted the virus, and with the power out and food supplies running low he enters into a paranoid state. Is the paranoia a product of mental illness, or has the world really begun to descend into chaos? 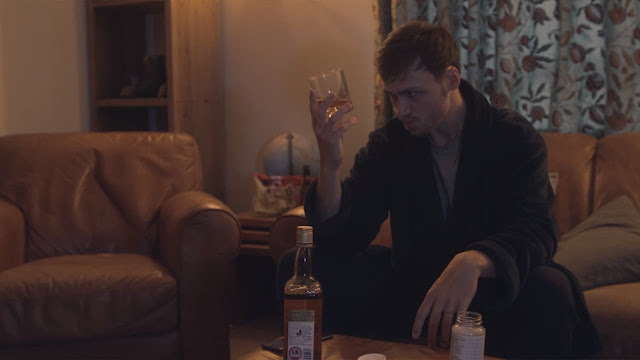 Homesick for a good 90% of the runtime features just the one character, Farries has to carry a lot of the film on his shoulders and is partly successful. It's not really down to the actors fault, it is more that the character he plays is barely into adulthood, as such he is prone to tantrums, has a basic understanding of how to survive on his own, and is full of self pity. This makes for a protagonist who it was hard to like. There are a handful of other characters, most of which exist as voices on the phone, but occasionally real people turn up to split up the tedium the student is facing. Having an isolated character means the longer the movie is the more risk of boring the audience. That is almost the case here, but at least the film is split into chapters that neatly split up the acts, with something different occuring in all of them. Truth be told I didn't get to a stage where I was bored.
On a relatable level I can't really comment, I wasn't isolated during any of the lockdowns due to still going out to work everyday. Still, I'm sure it would have been more interesting than the student makes it feel. What I found more interesting about this was the questions it poses. I got the impression that either the whole film takes place in an alternate reality in which the pandemic was far more serious, or that the student is mentally ill and is hallucinating a lot of what he sees. The former can be seen early on with the main news channel in the UK sharing a font similar to BBC but being made up of different letters. At first I thought maybe this was just to do with not actually being able to use their name. Events later in the film seemed to suggest this was a very similar, yet slightly different reality. There are also plenty of signs the student is not well, the isolation really starting to affect his mental wellbeing. Specifically early on when he ends phone calls with people but the conversation carries on in his head, and the soundtrack that often incorporates jumbled whisperings to indicate schizophrenia. One thing Homesick does get right is never firmly coming down on either side of this, all the way to the end credits it is never certain what the real truth is.

Homesick succeeds in showing how isolation can really gnaw onto the mind, and how this malaise can slowly eat away at the thoughts you have. I did feel that the same effect could have been achieved with a shorter run time, but I liked the concepts introduced here, it made something that felt much more normal take on an apocalyptic tone that helped prop up the later half of the film. Homesick is currently streaming on Amazon Prime.
SCORE: