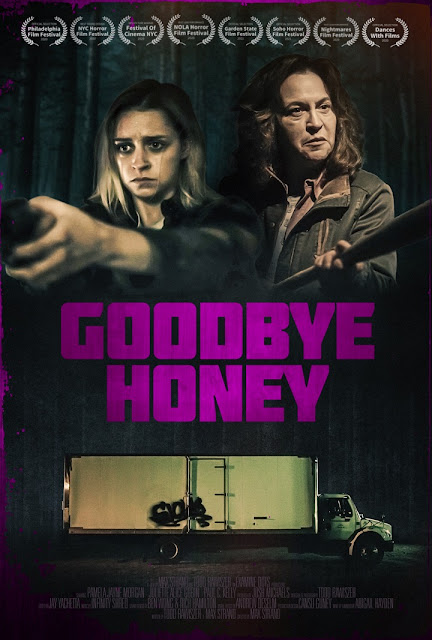 Goodbye Honey (directed and co-written by Max Strand in his feature length directorial debut) begins where a lot of other films end. An abducted girl has somehow escaped her captor and is on the run. This set-up is almost a subgenre of the abduction genre itself, the best example in recent memory being the excellent 2015 horror Bound to Vengeance. This indie film manages to work to its limitations by having nearly the entire movie take place in the one nondescript location, even if for a dumb reason.

Dawn (Pamela Jayne Morgan - The Manor) is a middle aged trucker who has pulled over her lorry for the night in order to get some rest. She pulls into the entrance to a national park, and it is here where she encounters a young woman, Phoebe (Juliette Alice Gobin) who alleges to have recently escaped from a man who had been keeping her captive for the past four months. She begs for assistance from Dawn, but the trucker has misplaced her keys, and her mobile phone has recently gotten broken, so the two are stuck put. So begins a long dark night that finds the two in a whole load of peril. 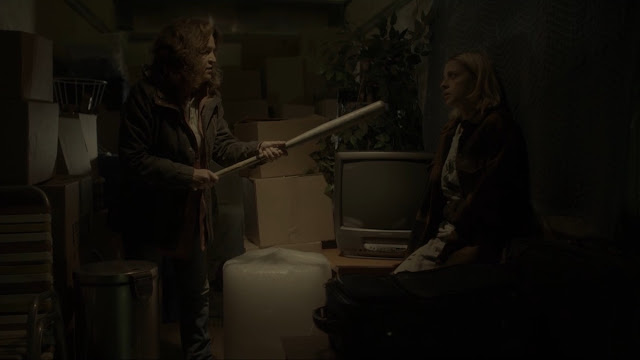 It was quite novel to realise the entire film was going to take place in and around a truck in a bland location that is in darkness the whole film. It gave Goodbye Honey at first a Twilight Zone type feel to it. I have no problem the film being set out this way, what I had issue with was the set-up that Dawn had somehow misplaced her keys. I can't help but feel there could have been a better idea used as it seemed not only ridiculous that this had occurred, but also ridiculous that the characters give up looking for the keys almost immediately. If you were that desperate to escape from a deranged kidnapper would you really make a plan of sitting around in the only vehicle for seemingly miles, waiting for daylight to arrive? Look past that part of the film and the rest of Goodbye Honey does a lot of things well.

Over the entire movie there are just a handful of characters, principal among them Dawn and Phoebe. Both are flawed in their own ways, but remain strong female characters even after encounters with sadistic male characters. There was a lot of tension here, a feeling that something bad was going to happen at any moment. This best occurs towards the end of the film's first act with the introduction of two teenage psychos played wonderfully well, especially Rafe Soule (Menagerie) as Zach who gave a performance tinged with menace. There was a feeling throughout that the film was going to have no downbeat moments to it, the peril persists which made this quite hard to watch at times, but that made the vibe effective.

I liked how the story was presented here. It is halfway into the movie when a flashback sequence is shown to reveal the details of Phoebe's abduction and what life was like for her as a captive. This whole sequence played out in almost silence with distorted voices, lighting effects, and a dizzying montage sequence once the girl was captive. Later on after this there are a couple of nightmare sequences that managed to not look cheap and corny. Special effects are minimal but they look good when they do occur, especially an effective looking corpse due to great make-up. This may be an indie horror but it looks quality from start to finish.

Getting over the silly set-up I found Goodbye Honey to be a thrilling and tense film that wasn't afraid to use some interesting ideas with which to tell its story. The limited location was a great decision as it focussed the film onto the characters themselves. While not an easy film to watch at times, it was a decent little horror that I enjoyed my time with. Goodbye Honey will be available from May 11th on a variety of digital and cable platforms thanks to Freestyle Digital Media.