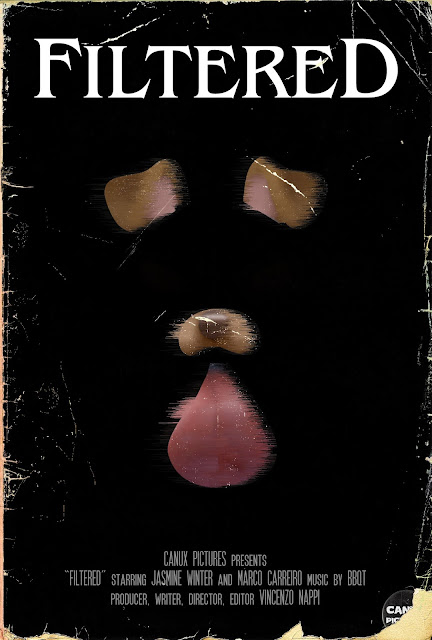 Filtered is the latest short horror film from writer/director Vincenzo Nappi (First Bite) and follows a format that has been used to great effect in films like Host and Unfriended. That format being having the whole film playing out via what is shown on a character's PC monitor screen, a relatively new sub-genre of found footage. It was good fortune that I happened to be watching this on my PC myself as when the short started I was briefly confused as to why I seemed to be suddenly randomly calling a person I didn't know. This immersive illusion didn't even end there, at some point during the film I noticed the Spotify app image at the bottom of the (in film) PC screen and again got confused for a split second due to not having that app on my computer! Sleep deprivation or successful immersion? Probably a bit of both.

Filtered is shown via Jasmine's (Jasmine Winter - Is Your Daughter Home?) PC screen and mostly revolves around a video call she is having with her friend, Marco (Marco Carreiro who was sound recordist and casting director on First Bite). Marco begins playing around with filters to make his friend laugh, but that laughter turns to screams when Jasmine decides to do the same back to him... 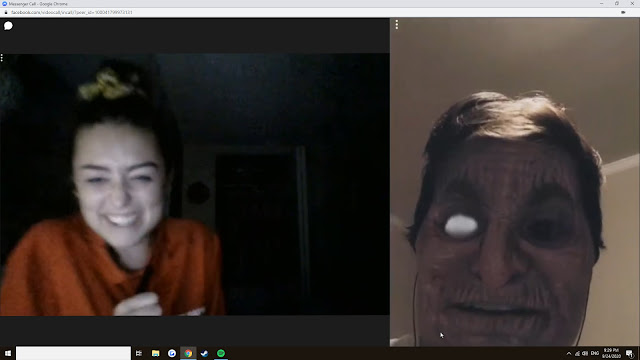 The film is five and a half minutes long and the actual horror begins at around the three and a half minute mark. It comes creeping in so subtly at first that it took a few moments to realise the tone had changed. My first watch of this I had wondered when this horror would ever begin, but upon rewatching it a few times I came to appreciate how this build up really helps make the last part of the short work more effectively. Saying that I guess there was one little sequence that didn't really add too much. The idea for this short was well implemented, though it was an idea I have seen a couple of times in other films and so didn't feel as fresh as it might have been. Regardless it did manage to chill, I liked the juxtaposition of the two video call screens, Marco in a brightly lit room acting all silly, Jasmine sat in the dark in her own personal horror film.

Sure, Filtered might use ideas I had seen before, but it gets a big plus from me in that it didn't feel the need to resort to a cheesy jump scares finish, instead a great use of sound effects to keep the dread continuing through the end credits. Elsewhere the two actors really brought this to life with their subtle changes in facial expressions when required. Filtered had its premiere at the Cabane á Sang film festival on April 24th.