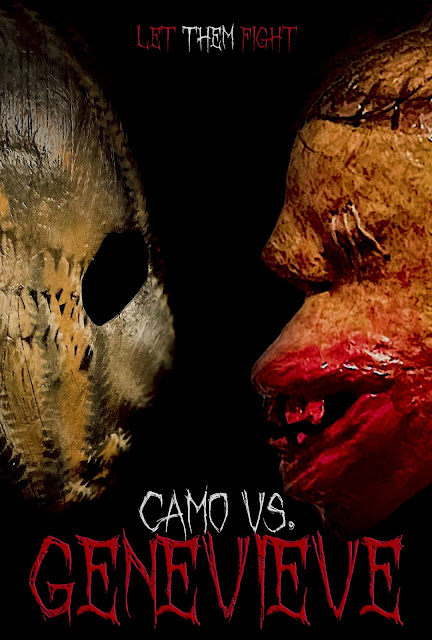 Yet another new entry in Nicholas Michael Jacob's Genevieve series of short films has emerged, again continuing on the story of the titular cursed doll. First there was Genevieve, a short horror based on a segment from the 2019 anthology film Urban Fears. This was followed up later last year with Genevieve Wrecks Havoc, and now comes Camo Vs. Genevieve which resurrects another character from Urban Fears.

Continuing directly on from the previous two shorts this sees masked slasher Camo (Jacobs) appearing at the house where the cursed doll resides. The two get into a battle with only one emerging victorious.
It seems each subsequent film gets shorter, with this one taking place over three minutes (that includes end credits). The highlight of this was the soundtrack, it was very eighties horror synth in style, which I loved. A common complaint is that these short films don't feel such much like films, but more like chapters from a bigger story. You couldn't head into this and leave satisfied with a complete story, instead it is like one more part of a larger jigsaw.

Genevieve is a fun creation, the look of it is as grotesque as ever, while the tricks used to make it seem like it is alive are as charmingly basic as ever. The battle between the two monsters is brief but fun, but as a story that is all it is, an all too brief fight that sheds no new story elements. As another stop on the journey this was enjoyable, if far too brief. If you have seen the others and have gotten something out of them then this will be worth watching. Camo vs. Genevieve releases on YouTube on the 1st May, so check it out then.

Posted by Daniel Simmonds at 03:46