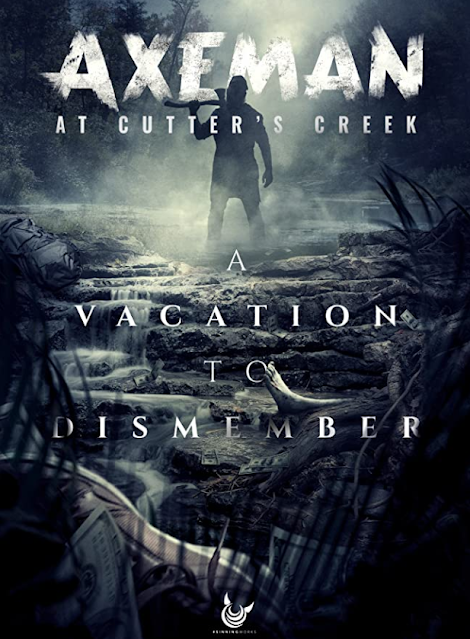 Axeman At Cutter's Creek was an indie slasher that originally released back in 2013. The film currently has a 3.2/10 rating on IMDB. The writer/director Joston Theney (Stained), who also had a lot of other roles on the film (including playing one of the primary characters) has stated that the original movie was rushed to release. In fact he seems to have been unhappy enough about it that after regaining the licences for both that film and its sequel he has had the films re-edited to make them a whole load better. This included changing the films into more of a straight horror, adding new music, new footage as well as cutting out 25% of the overall run time. I haven't seen the original so I was going into this new redux version fresh.

A group of friends have gone away to a remote cabin at Cutter's Creek for a weekend of sex and alcohol. These include Stacy (Elissa Dowling - We Are Still Here, Party Bus to Hell) who has recently started dating her best friend's ex, Brian (Stephen Eith), pervy Randy (Nihilist Gelo - Stained), Darren (Thenay) and the girl he is in love with but has been too afraid to admit it, Vivian (Eliza Kiss - The Encounter), as well as a bunch of other young adults. The time share for the cabin was bizarrely cheap, and that is down to the local legend of a mad axeman who once went on a rampage in the area but was never caught. Unfortunately this local legend is very true, the axeman (Scot Pollard) is still in the area and as mad as ever... After a fake out prologue in which a trio of bank robbers meet their end at the cabin things soon become very traditional in the slasher sense of the word. An early problem I had back in my teens when watching the Friday the 13th films was that some of the characters I actually liked, and so I was rooting for them to survive. Thankfully that is not the case here, every single character is insufferable and I eagerly awaited their deaths. These are all vulgar, sex obsessed idiots that often don't really seem to even like each other that much. Their personalities are wafer thin, with barely any kind of development to them. In a different type of horror this would be a problem, in an old fashioned slasher movie though it makes the kills all the more delicious. There was also a nice guest appearance from Brinke Stevens (Teacher Shortage, Slumber Party Massacre).

The kills are one area that Axeman At Cutter's Creek often excels at. The first proper on screen death scene was so fun that I couldn't help but blurt out "lovely!" upon seeing it. Many of the kills aren't as exciting and fun as that one but there are still a decent handful of really enjoyable ones that are sold well. These include a decapitation, curb stomps, one poor victim even has their brain pulled straight out of their skull! The special effects back up these inventive kills, so they look as good as they sound, and that is helped a lot by Pollard. This actor looked on screen to be about 12 foot tall, I think his actual height is (a still giant) 6 foot 11, but he fills the screen entirely making even the tallest actor look small by comparison. This killer is no emotionless masked murderer, instead his only disguise is a baseball cap and hooded coat, leaving his face free to gurn with sadistic pleasure at all the horror he is inflicting. For me he was the stand out actor in the whole movie. You would imagine an axeman would be handy with an axe, but his main weapon is his insane brute strength which again was sold very well (aside from some CGI blood spurts), though when it comes to strangling he is bizarrely terrible at it. 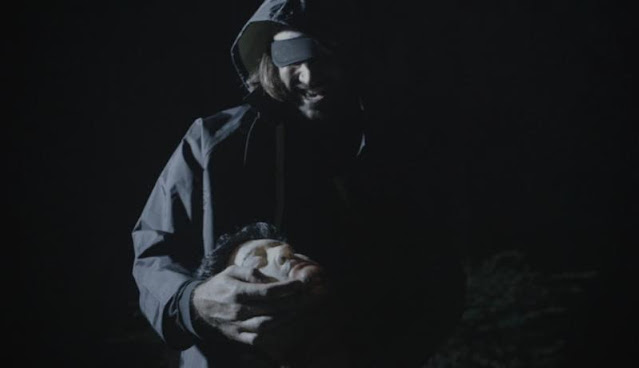 As you would expect the story is barebones, just an excuse for a group of victims to be cooped up together in a remote location. It leads towards the inevitable 'final girl' showdown that was thrilling to watch but ended abruptly and seemed quite far fetched in how it all transpired. Along the way you get one of the most disturbing scenes in a film I have ever seen. A character accidentally pukes up into the mouth of the guy she is kissing, rather than stop they continue at it, with vomit all around their mouths. This was a stomach churning scene that I really wish hadn't been there, unpleasant and not in a good way.

Axeman At Cutter's Creek never tries to be anything more than an old school feeling slasher which is more than happy to stick religiously to the tropes of the genre. Leaving your brain at the door on entrance to the film and you will have a fun time, plenty of enjoyable kills against irritating characters by a scene stealing mad man. This new version of Axeman At Cutter's Creek is scheduled to come to VOD on May 7th.