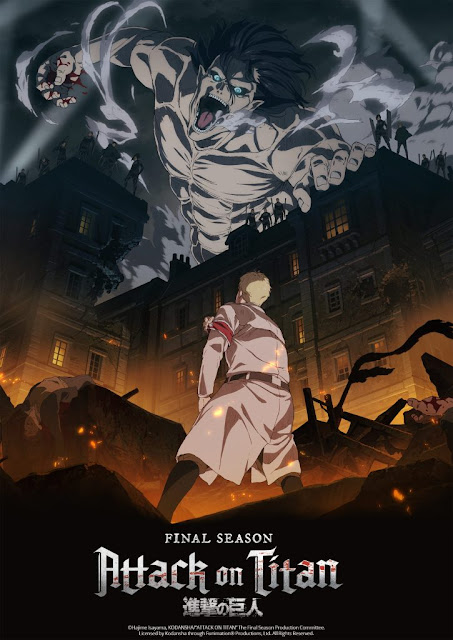 From the get-go it was clear that season 4 of hit anime Attack on Titan was going to be its final one, after all it is so set in stone that it makes up part of the season's title. What wasn't so clear is just how many episodes it was going to have. Each season of the show has had different episode amounts, but as these episodes came out it became clear the story wouldn't be able to finish within the stated sixteen. It was a relief then to discover a part 2 of this final season is due to come out this winter. Obviously this review will just be based on part 1, and obviously there will be unavoidable spoilers for people who haven't seen the previous seasons.

It is four years since the events of the third season in which the people of Paradis island learnt that their world is a whole lot bigger than they could have ever guessed. Away from their medieval style of living, and their Titan problem (huge humanoid man eating monsters) a whole other world exists, one that is far more modern in its technology. In a city far away, a bunch of Eldian recruits (including among them Falco and Gabi) for the Titan program, wage war against the enemies of Marley. Meanwhile the 'devils of Paradis' (as they are known) have been steadily working towards a plan that will safeguard themselves from the rest of the world. The only problem being Eren whose insatiable thirst for revenge could scupper these plans. Of course, not everything is as it seems... 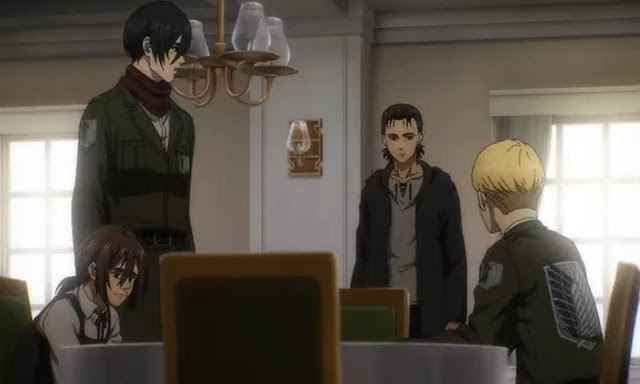 This is a good season but it isn't without its issues. The biggest problem I had, at least initially is that the focus didn't seem to be on the characters I had grown to love, instead there was a whole bunch of new characters. It's an interesting idea to show things from the perspective of the enemy, but I found it hard to care at all about these new characters, some of which even annoyed the hell out of me. Primary new protagonist, Gabi is the most irritating of them all. I think she was meant to be the enemy version of Eren. Both are hot headed, and both rush into things without really thinking them through. Balanced with her is Falco, someone who seems much more cautious and thoughtful, he reminded me a lot of Armin. The first four episodes (The Other Side of the Ocean, Midnight Train, The Door of Hope, and From One Hand to Another) follow these new characters and I began to lose hope.

Thankfully this weird experiment of unrelated characters and their stories is immediately counterbalanced with the appearance of the true protagonists of the show. There have been standout episodes in previous seasons, but never before have there been so many following after each other. Declaration of War, The War Hammer Titan and Assault are Attack on Titan at its very best. These were extreme action and very exciting. Due to how much I enjoyed them, me and by best friend ended up watching them multiple times. Simply stunning. This was the wild punch of the season, afterwards things inevitably settle down, and head into more political feeling episodes that reminded me a lot of the middle part of season 3. Along the way you get a couple of flashback episodes which were both interesting in their own way. The Door of Hope reveals details of Reiner's (the Armoured Titan) early life, while Sole Salvation does the same for Zeke (the Beast Titan). The first part of the season ends with Above and Below which sets up a huge cliffhanger, and the promise for far more action to come. 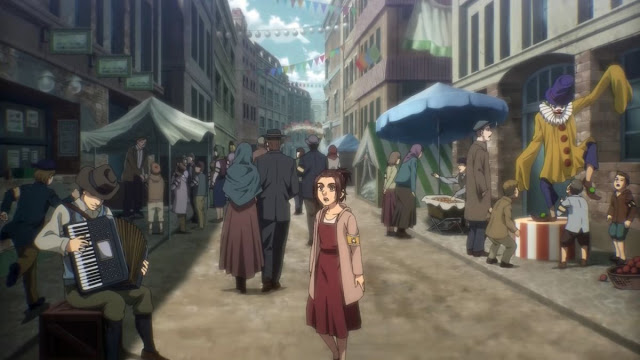 I will admit I have always found the story of Attack on Titan to be mightily confusing. I think this is down to the constant time skips, the convoluted history of the world, and the way characters looks constantly seem to be changed between seasons. However, this has been full of amazing moments, crazy plot twists, and has never shied away from showing the violence of the world. For me nothing will beat season 2, this was Attack at its most horror based in feeling, while I loved that the whole season took place over just a couple of days. Saying that however part 1 of this final season delivered the goods, I am very excited to see how this fantastic anime wraps up. Attack on Titan is currently streaming on Crunchyroll.