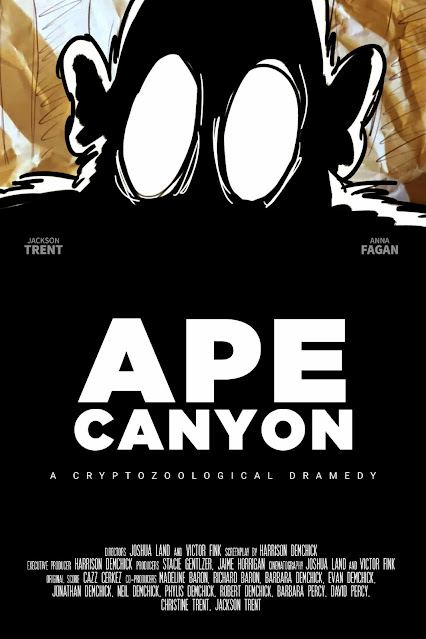 I knew going in to this Joshua Land (Bad Witch) directed movie that it wasn't going to be a horror film. It does however have a story that revolves around the hunt for Bigfoot (a similar non horror Bigfoot film I have previously reviewed was A Wish for Giants). Sometimes it is nice to have a break from life or death situations and so I thought it would be a nice breather from all that with Ape Canyon. It was a nice breather, a road trip movie (I always enjoy those) that has the horror element not on likely non real monsters, but on the turmoil that mental trauma can cause.

Cal (Jackson Trent - Bad Witch) unexpectedly turns up at the college his sister Samantha (Anna Fagan - Lotus Eyes) teaches at one day. Having gotten obsessed with going to a place called Ape Canyon that is said to be the home of some Bigfoot creatures, Cal tricks his sister into coming along with him on an expedition to the area. Things don't go according to plan however, and with the odds increasingly against him Cal takes more and more drastic measures to reach his goal, no matter the obstacles in his way. 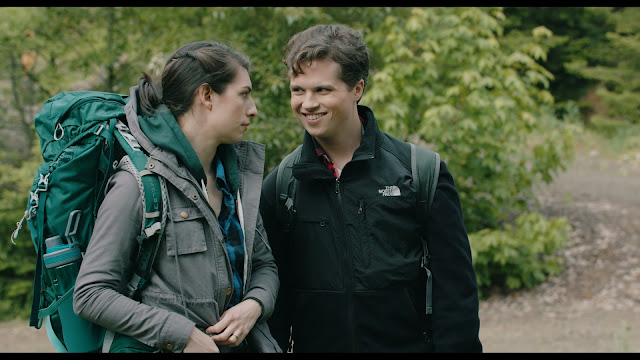 The tagline for the film describes it as a 'cryptozoological dramady', and to begin with it is that. The films first act is light-hearted and as annoying as some of the characters can be they fitted the vibe. Ape Canyon never really loses sight of that light-hearted tone, but it certainly takes some steps off that path. What seems at first an eccentric yet loveable character in the form of Cal takes on a more darker feel, his eccentricities more and more feel like they are due to a real mental illness that has taken root in his mind, rather than him just having a kooky larger than life persona. There are a variety of characters along the way, though as the film progresses it becomes much more about the two siblings. Some of these side characters added a lot to the pairs adventures, in particular Charlie (Donny Ness), a young Jewish boy brings a lot of the comedy elements due to the way Cal talks with him. Once he is gone the film begins to take on a darker edge, beginning with a rant Cal has that shows his obsession to get to Ape Canyon is not a healthy one.

By frontloading the side characters with personalities into the start it means a lot of the next two thirds are just about the two protagonists. That kind of fits the road trip genre, but aside from a man Cal meets hitchhiking there are no more memorable side characters, the ones who do appear are all generic and lifeless people. That wasn't much of an issue really when the two protagonists were so interesting. It is obvious from the start what the cause of Cal's newfound obsession will be, but I didn't mind the film slowly taking its time to reveal it. I will say I though Samantha was much less of a well rounded character. When it comes to her brother she was great, but there is just one scene where she is stating guilt about the things they have done, yet after this she seems no longer to care about the consequences of their crimes.
Ape Canyon looks beautiful, most the film takes place in and around forests, some effective drone shots at times help to sell the beauty of the location. There were also a couple of cool looking cartoon sequences to show recreations of Bigfoot encounters, a nice touch. It was backed up with a fitting soundtrack, a chilled sound that worked with the surroundings and at its core, quite personal story. 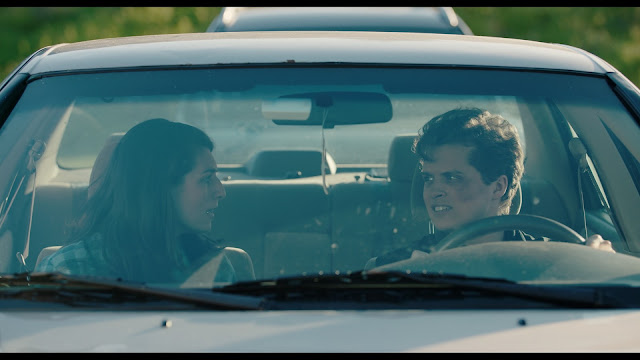 I wasn't sure exactly what sort of film this would turn out to be, but I liked what it became. I may not have agreed with some of what happened here but it told its story well, especially due to Trent's performance. I started watching this with the intention to just get a taster before coming back later to watch the whole thing, instead I was glued to the screen for the whole 74 minute run time, that is testament to how much I ended up enjoying it. Ape Canyon came to Cable VOD and Digital HD on April 16th.