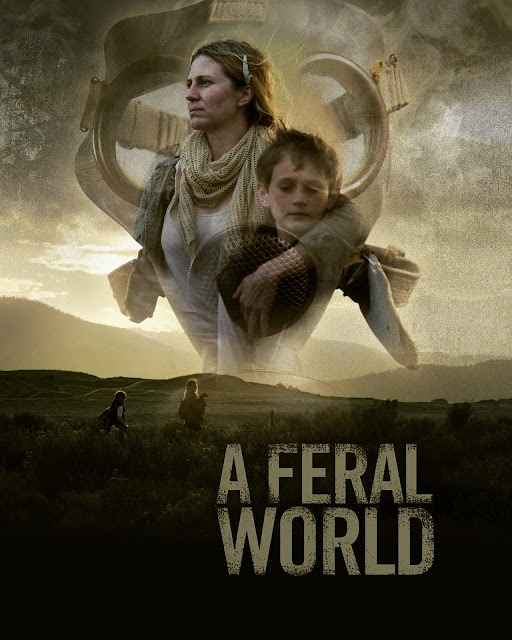 It is always good to spice up watching films on this blog by switching over to the post apocalyptic genre. This is a comfortable bed fellow to horror and is often neat to see what ideas have been used to represent the collapse of civilisation. Indie films of this type have a habit of being overlong, but in the case of the David Liban directed and written A Feral World this just about manages to not do that.

Due to something to do with swarms of out of control nanobots the world has fallen into ruin. Orphaned boy Sonny (played by the director's son Caleb Liban) one day encounters Emma (Danielle Prall), a woman desperately searching the wastelands for her missing daughter, Janey (Vivienne Bersin). The two become close and decide to team up, along with a small dog named Lips. Their search brings them to a compound run by the sinister Jasper (Timothy McCracken - Alan Wake), a man who holds power over the children he has captured due to being able to control a small nanobot swarm. 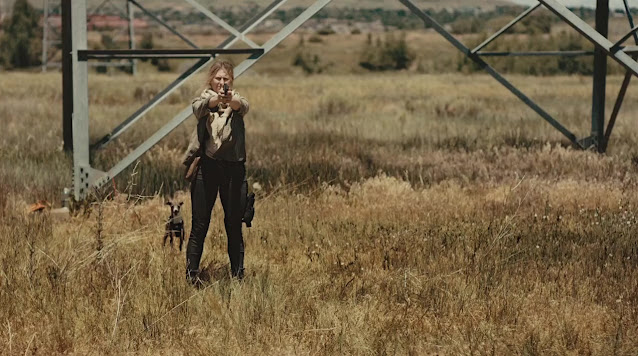 A Feral World takes place over five different chapters, each of which features a jump in time. The gap between chapter one and two is a few months for instance, while the difference between chapter two and three is a year. One part that this movie gets right is that these time jumps seemed to have also occurred in real life. The film was shot over four years and so with each new chapter the actors look visibly older, which was a cool thing to see on screen. Whether it was designed this way, or if the time skips were added as a reason why the still growing child actors look older I don't know, but it worked. The first two chapters had just Sonny and Emma mainly, these parts with them exploring the post apocalyptic world felt different to the direction the rest of the movie takes. With finding Jasper this turns into something more centralised, with a proper goal in mind. McCracken was great as the antagonist, he really stole the scenes he was in, and reminded me of the type of bad guy you would find in The Walking Dead.

The indie budget can most keenly be seen in the frankly abysmal CG effects to represent the nanobot swarm. This looked as fake and artificial as you could imagine, a real early 2000s CG capability vibe going on here that extends to the damage they cause. They didn't look real and this did detract from their use as these dodgy effects extend to damage inflicted on their victims. Also, ruined and abandoned factories are mainly used to show this ruined world, but there was one particular scene where traffic could be seen in the far background moving around. That part was quite distracting for a world where technology is meant to have ceased to exist outside of the murderous swarms! 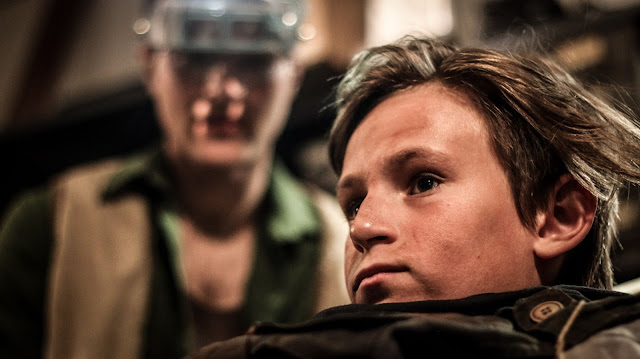 I'm fine with the apocalypse not being explained, and I'm fine with the small cast, though it does mean not too much happens along the way. The first half of the film feels different to what came later, a series of low threat adventures with Sonny and Emma. Such adventures as two men who ambush the pair (making up 2/5s of the entire adult cast members among them), and Sonny getting captured by a teenage girl while looking for his lost dog. Initially this started out as two different short films, Feral and Feral 2, I figure these two shorts made up a bunch of this early adventure rather than being separately created films.

A Feral World wasn't a bad film at all, it's not overly stuffed with actors and convoluted storylines, in fact the only part that really lets it down is the darn awful CG effects for the nanobots. I guess it might not be too exciting for some people, but with a decent little cast and its ambition kept in check I found this an easy one to watch. A Feral World is due for release on 23rd August later this year, thanks to High Fliers Films.