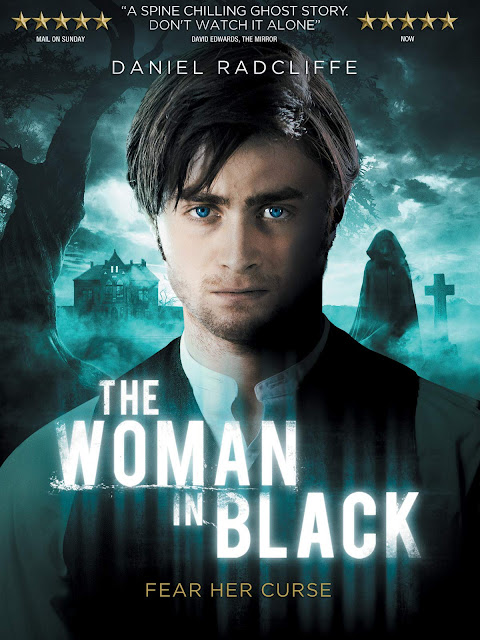 When I was a teenager in the 90s I went with my parents to see a theatre adaptation of Susan Hill's 1983 novel The Woman in Black. It might be strange to say but that play managed to be terrifying, even thinking back on it now I get goosebumps. That was part in due to the meta way the story was told, the play was set out as if it was two actors rehearsing a play about The Woman in Black, with the chilling reveal at the play's end that the 'actress' playing the part of the titular woman had only been visible to one of the two actors (and of course the audience), the insinuation being that the play itself had been haunted by the evil ghost. To keep up this illusion this actress wasn't even credited in the play's program. You had to be there I guess, but it gave me a sleepless night! Anyway, back in 2012 when a new version of the classic story was being made into a film I decided to skip it. I felt both that it could not live up to my memories of that play, but also, with Daniel Radcliffe in his first film role since the Harry Potter series had came to an end I felt I wouldn't be able to take him seriously. The film was followed up with a sequel in 2014 (the dull The Woman in Black 2: Angel of Death) and during my review of that I stated my intention to one day watch the first one, and now here I am.

Radcliffe plays Arthur Kipps, a young solicitor in the early 1900s who is deep in mourning after the death of his wife some years previously. This has affected his performance at work, with his employers giving him one final chance to prove himself. He is tasked with travelling to the small village of Crythin Gifford in order to sort out the affairs of a woman named Alice Drablow, so that her former home; Eel Marsh House can be sold. He arrives to find the village folk hostile to his presence, the only friendly face he encounters is the wealthy Sam Daily (Ciarán Hinds - Game of Thrones TV series). It is rumoured that Eel Marsh House is haunted by its former owner and that anyone who sees this ghostly figure is cursed. Arthur at first dismisses these stories but as he investigates the property he begins to believe that there may be some truth to them. 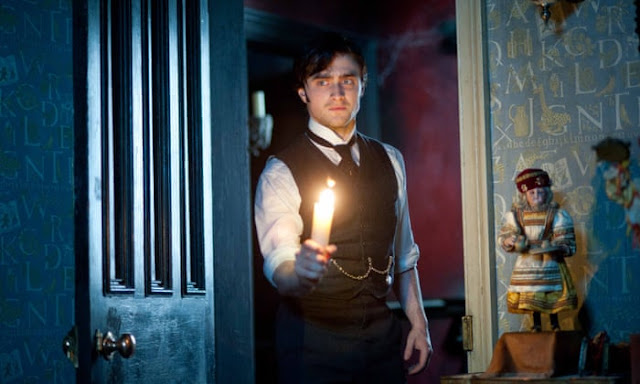 What came first, the chicken or the egg? It would be easy to dismiss this horror as derivative of others that have came before, it shares similar plot elements to movies such as Sinister and Ringu with what happens not being too surprising. However, the book it is based on came out long before those were even thought of. For me what stood this apart was the time period, this has a good feeling of a Gothic horror and it felt strangely freeing to not feature the trappings of modern day technology. I like Radcliffe as an actor yet I never really feel he is that amazing in the roles I have seen him in. Here it really felt like he was acting well, sure he still had a face that seemed a bit too youthful for the role he was playing but he gave a believable performance. My favourite moments were when he was alone, reacting to the events happening around him without the need for any kind of dialogue, he shows the fear in his eyes well. Despite a large cast the majority of the characters are totally background ones, with Sam feeling like the only supporting character. I enjoyed the interactions between these two.

The Woman in Black is a scary story but it isn't a scary film, it didn't help that being familiar with the story I knew exactly what was going to happen. Eel Marsh House was a fantastic location, every part of the movie that took place here felt very atmospheric due to the creepy design of the manor. The entrance hallway, the upstairs corridor and the nursery were all effective locations, helped out by some great set design and props (including authentic toys from the time period). There is an over reliance on jump scares and none of these ever got me, but they varied in quality from corny to decent looking. A big complaint I had with this was the ending, a concession was made to what should have been a bleak and haunting finish to something that could be argued was cheery. The titular woman is a vengeful ghost so this concession felt out of place to me. 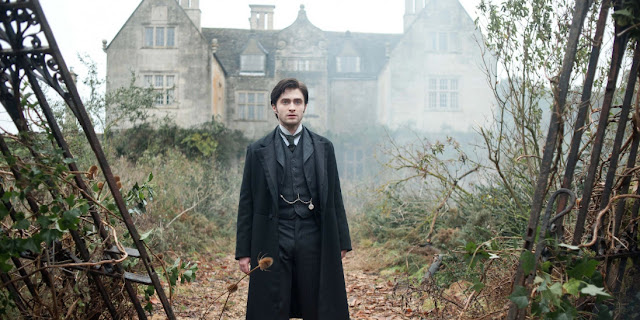 This was a decent Gothic horror but it wasn't something that was essential viewing. It was good to see Radcliffe finally in a role that felt better suited to him, and the whole look of the film was effective. The film never managed to feel like anything more than an inoffensive horror that was watered down from what its potential could have been though. The Woman in Black is currently streaming on Netflix.

Posted by Daniel Simmonds at 13:53