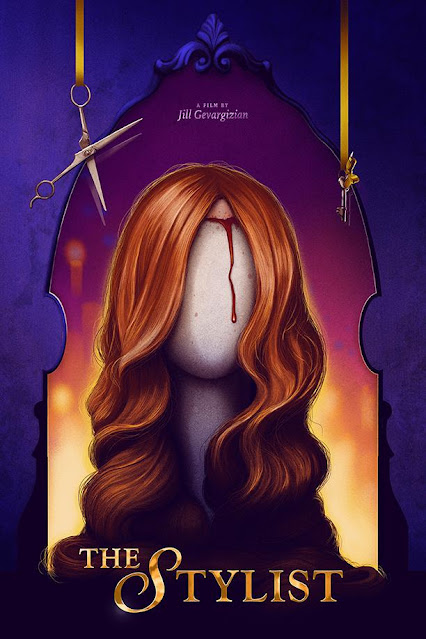 I heard a bit of buzz around Jill Gevargizian's short horror film, The Stylist back when it was released in 2016 but never got a chance to see it. Fast forward to present day and a feature length version of the story has been released, using the same actors, indeed it seems like the short itself is part of the feature, making up the prologue. While at a glance this can appear to be a female Psycho this is more of a slow paced horror that focuses primarily on the villian.
Claire (Najarra Townsend - Wolfmother) is a lonely and troubled hair stylist who is quite unsatisfied with her lacklustre life. She is envious of her clients and their life experiences, but more than anything she wants to be them. Unsuspected to all around her is that she carries a dark secret. She is a serial killer who kills and then scalps her victims. The scalps she keeps in her basement lair, where she wears them like a wig to pretend to be someone else, if only for a moment. After Olivia (Brea Grant - Dexter), a regular client of hers insists she do her hair for her upcoming wedding Claire begins to yearn for her client's special day. This twists into obsession and as the big day approaches she must fight against her instincts. 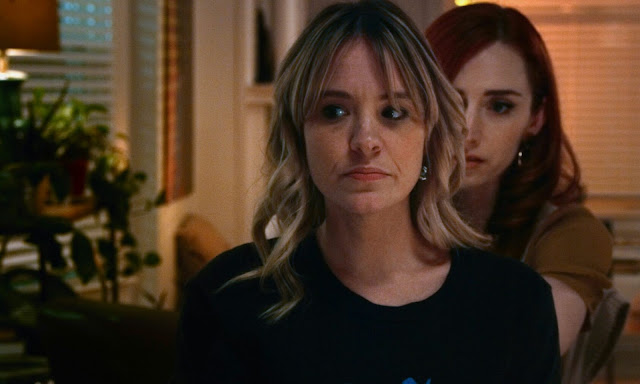 The most horror like parts of The Stylist are obviously the murder scenes, but these make up a small part of the overall movie. The focus is on Claire, and following around this main character can become exhausting. She's shy and unassuming, but also weird and kind of creepy, but everyone is so wrapped up in their own lives that this isn't really noticed by anyone. Townsend does a great job in this lead role, she displays a lot of different emotions over the course of the film, and despite her crimes there are moments where you do feel a bit sorry for what is blatantly a damaged person who cannot help themselves. The moments where the cracks begin to show in her wafer thin facade are where the acting felt at its best. At just over an hour forty minutes staying with the one character throughout means you get to know them quite well, even then though Claire is a bit of a blank slate, aside from inferring she is the way she is due to childhood abuse there are no details about her past.
The scalping scenes include plenty of blood, but The Stylist doesn't go into too much detail. For instance it is only the second victim that you get a little glimpse into how she hides the bodies, the rest show Claire doing the bloody deed then usually cuts to her somewhere else. The story is more concerned with her steady path into deeper insanity. It is not in a rush and there are plenty of scenes when it feels like things are going to ramp up but then fade away with Claire's wavering determination. I had a feeling I knew where this would go, and it did go there, making for a fun finale and an open ended cut into credits. For all the blood shown the murders are not the meat of the tale, that is more the personal road Claire travels down. 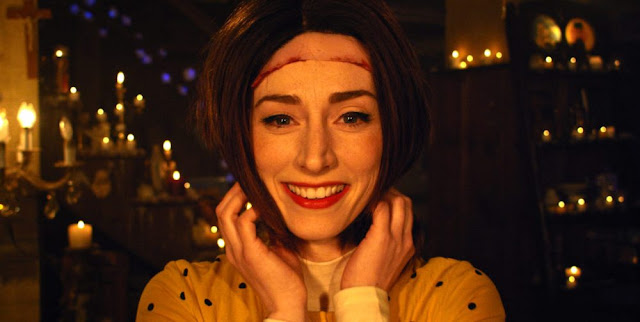 The Stylist was well directed and had a great main lead, I felt like it was an acquired taste as the gruesome story about societal loneliness plays out at an unhurried pace, but the competence of the filmmaking process made for something that was easy to appreciate as a whole. The Stylist was released on 1st March as the headliner of the March 2021 lineup of Arrow Video's subscription based ARROW platform.
SCORE: