The Rotting Zombie's Round-up of Horror News for March 2021 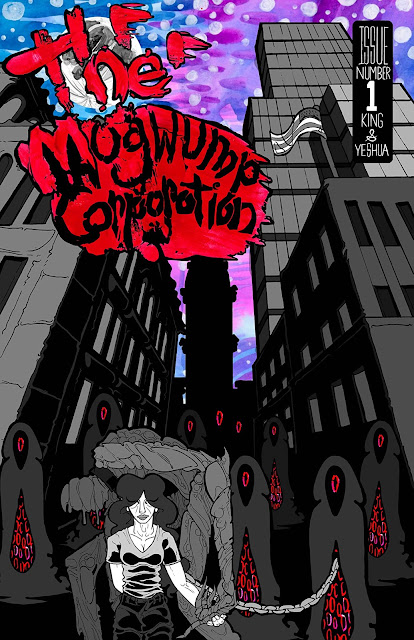 Life marches inexorably forward and I find myself once again faced with a bumper news post to write. I started the year with the intention to write seven posts a week, but I came to a realisation last week that this was leaving me with not much of a weekend left to relax. So, I took the decision to cut down my posts to five a week, giving me Monday to be a man of leisure. On the pandemic front I was fortuitous to be working for a company whose staff were eligible for the vaccine due to the nature of the work, so I can happily state I have now had my first dose, even if the side effects stayed with me for an entire week. Anyway, who cares about me, let's bring out the news...

New horror comic, The Mugwump Corporation issue #1 is now available via ComiXology. The comic is about loner Marybeth Callen who wants nothing more than to find a friend. She finds one, but they transform her into a cannibal monster. I love the art style and colours in this one, has a unique look to it. For more details check out here.
A Disgusting Supermarket of Death by author James C. Harberson III (co-author of graphic novel Stay Alive) is now available on Amazon. This is a comedy horror collection of '...hard-boiled shorts about satanic Christmas movies, performance art euthanasia, child sacrifice skincare, and other demented goodness'. Check here to pick up a copy.
Killer Raccoons 2: Dark Christmas in the Dark made the list of eligible films for The Oscars for 2021, while it never ended up getting nominated for any of the categories this was still a feat I found pretty cool.
Horror sci-fi film Mandao Returns has now been released on Tubi TV. I said of this one in my 7/10 review "..as a movie to put on to just forget about the real world this works as pleasant escapism."

The animated violent time-loop horror To Your Last Death has so far picked up 34 wins since its world premiere at Frightfest. These include Best Feature at the Pasadena International Film Festival, Best Director from Horrorhound, and Best Horror Feature at the Phoenix International Film Festival. Reviewing this in September last year I gave it 9/10 and said "...the animation was attractive also, it is never smooth, but that made for a more strange and creepy look that felt like an animated graphic novel." This is currently free to stream on Amazon Prime, and can be bought or rented on various digital HD platforms as well as Blu-ray.

Voyagers, the sci-fi thriller is coming soon to UK cinemas. This was written and directed by Neil Burger (Limitless, The Illusionist) and stars Tye Sheridan (The X-Men franchise), Lily-Rose Depp (Savage), Fionn Whitehead (Dunkirk), Chanté Adams (Roxanne Roxanne), Isaac Hempstead Wright (Game of Thrones), Viveik Kalra (Blinded by the Light), Archie Madekwe (Midsommar), Quintessa Swindell (Trinkets), Madison Hu (Bizaardvark), and Colin Farrel (The Gentlemen).
In this film a group of young men and women have been sent on an expedition to colonise a distant planet. After revelations about their mission are discovered they go against their training, and life on the ship descends into chaos.

This next one is not so much horror, but it did seem unique so thought it would be worth a mention. Starfunk and the Astral Pioneers is described as 'the first feature film made about the Funk music genre whose story takes place in outer space'. The creator, Glenn Towery, having won awards for the screenplay has decided this space fantasy motion picture is going to be part of a crowdfunding campaign so he can get funds to create the movie himself. The Kickstarter campaign is due to run in May. You can check out the website here.
I set myself a limit of an hour and a half to write this months news post, and so finishing with some music news now. A Cloud of Ravens (great name) have released their new album, Another Kind of Midnight on Cleopatra Records. Check out the track for this Darkwave duo's single When it Comes below. I have enough emails to fill up an exclusive music only news post so maybe I will do that in a week or so.
Posted by Daniel Simmonds at 10:41