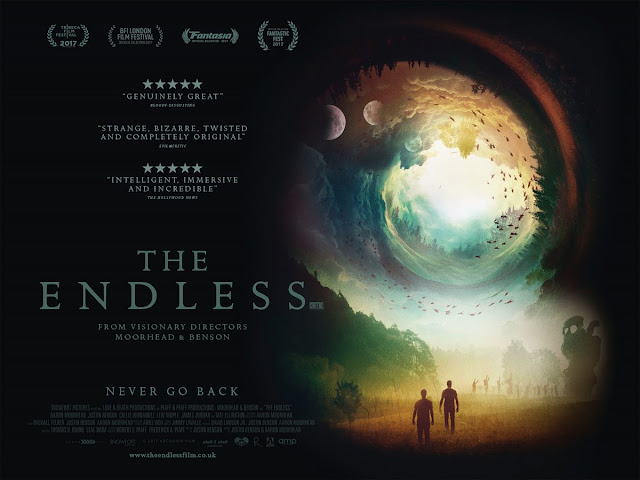 After enjoying the 2012 indie horror film Resolution so darn much the other week I just had to check out the 2017 spiritual sequel The Endless. What I liked most about the first film was the pervasive sense of dread and the all encompassing mystery of just what on Earth was happening. This time around, the directors, Justin Benson and Aaron Moorhead play the part of the protagonists, with Benson again being responsible for the story. This worked fantastically as they happened to have tiny cameos in Resolution so were able to reprise these roles and build on their characters. There isn't really anyway around it, there will be spoilers for the first movie as the twist ending plays an integral part in this one. If you have yet to see Resolution go do so, it was a brilliant horror.
Ten years after Justin (Benson) and his younger brother Aaron (Moorhead) escaped an alleged death cult they receive a strange videotape in the mail. The tape features one of the cult members, Anna (Callie Hernandez - Alien: Covenant, Blair Witch) telling the men that she would always be waiting for their return. Surprised that the cult hadn't imploded, and completely disillusioned with the harsh life they have experienced living in the city, Aaron convinces his brother to take him back there. He explains he needs to visit in order to get some closure and to be able to properly move on with his life. The brothers arrive to find that nothing there seems to have changed over the past decade, even the members there do not seem to have aged. Aaron is overjoyed to be back, with it increasingly seeming like his brothers' warning stories about cult life were not completely true. Justin meanwhile is ill at ease, he always felt there was something off with the place and that feeling is compounded with his return when he begins to experience a series of unexplainable events. 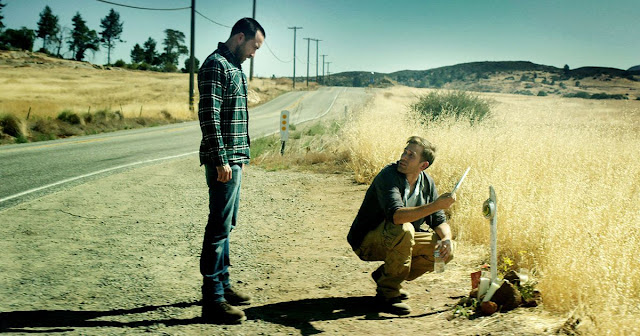 Watching The Endless I was struck by two things. Firstly that this was way more than a spiritual sequel, this definitely takes place in the same film universe and even features a bunch of returning actors. It also become apparent that that delicious layer of persistent dread from Resolution was missing. For the first forty minutes or so this really bothered me. The film was great, there was no doubt about that, it just felt like this was a far more friendly and chilled adventure. That dread never did return, however by building on the mythos Resolution established this became something that felt like there was endless mystery to it. As the minutes ticked on I became desperate to find some sort of...well, some sort of resolution to the tale. I pondered if the revelations shown here somehow impacted on the effectiveness of that first films unknowable story, and by actually showing what had become of the protagonists of the first film it did a tiny bit. I had heard they featured somewhere within this but I expected a throwaway mention at best, instead they are not only get mentioned by several different characters but then we are treated to a couple of meaty scenes featuring these fantastic characters, the original actors reprising their roles in a way that made their scenes feel like a little bit of joyous fan service.
The mystery of the story is the big draw of The Endless, as the time went by I became increasingly anxious to know exactly what was going on. Unlike Resolution this time around it is far more clear the exact path you are encouraged to head down in terms of the explanation for everything. This can be seen both with an opening quote from H.P Lovecraft, and with some of the dialogue characters speak which echoes ideas from that master of horrors Lovecraftian tales. The feeling of terror was greatly reduced due to having much more of an idea what is the cause of all the craziness, but as to what is going on, discovering that knowledge kept me enthralled. Resolution worked so well partly due to the great casting, Peter Cilella and Vinny Curran had a great chemistry between them. Making the protagonists here brothers rather than best friends meant that Benson and Moorhead didn't have to compete. Also, before the protagonist, Michael, was very much a fish out of water, here, with the brothers returning to a familiar location they are far more 'fish back into water'. Their on screen close bond feels markedly different due to the characters being siblings. It was an interesting idea that they left the cult due to not wanting to be controlled, yet that is exactly what Justin has been doing to his brother ever since they left. The side characters were of course brilliant, the highlight for me being the cult leader, Hal (Tate Ellington - Sinister 2, The Walking Dead) who was such an interesting character and had some of the best dialogue of the movie. Previously practical effects were the order of the day, this time around there are far more digital effects that are mostly fine enough. The visual effects to show messed up things around the locations (such as two moons and the barriers for time loops) were effective. Less so were digital fire and blood effects, neither of which looked totally real. This sequel features a larger story and more characters so I can see why some corners had to be cut. Honestly though, these digital effects are pretty good, I feel like I'm just nit-picking. I mentioned time loops earlier, and that great device is used to fantastic effect here, pondering the idea of what different types of loops could feel like to be trapped in.
Production wise The Endless is a much better movie than Resolution. In terms of sheer enjoyment there isn't that much in it, but with its focus far more on horror than mystery the first film wins out. Regardless both are stunning movies and should be watched together as they both add so much on to each other. The Endless would be half as enjoyable without knowing the backstory and characters, while this sequel provides some much needed closure as to the fates of the original protagonists. I love that there are horrors such as these still out in the wilds that I only discovered due to sheer chance. In the UK The Endless can be rented on Amazon Prime.
SCORE: