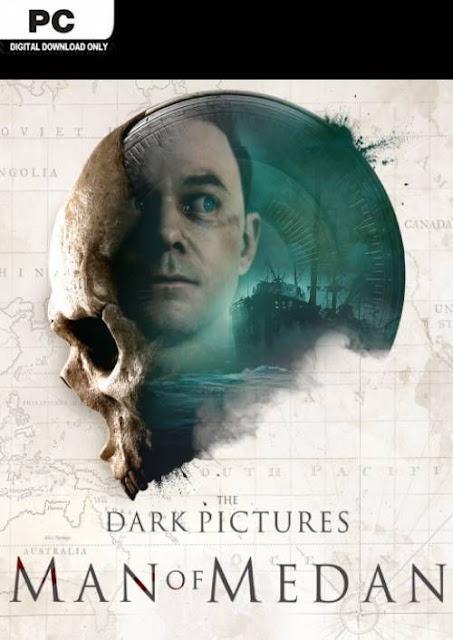 Until Dawn was a very good looking horror adventure game that played out like a 'choose your own adventure'. I said back in my review of it that I wasn't sure how much replay value there would be. This was followed up with a couple of VR spin-off games. Until Dawn: Rush of Blood was a fantastic on-rails shooter, while the other spin-off, The Inpatient was a first person perspective prequel (that I really should get around to playing). I recall hearing from people on a podcast at a time that they would like any new game in the mainline series to feature its own separate story, with its own separate cast of characters. Brilliantly that is exactly what the developers, Supermassive Games have decided to go with, and they have gone big with intentions to have eight different games telling eight different stories of terror. The first of these was 2019's Man of Medan, the second in the series, Little Hope, came out towards the end of last year.
Four friends that include Alex (voiced by Kareem Tristan Alleyne - iZombie), his girlfriend Julia (Arielle Palik), his little brother Brad (Chris Sandiford - What We Do in the Shadows TV series), and Julia's brother Conrad (Shawn Ashmore - The Ruins) have chartered a small boat captained by Triss (Ayisha Issa - 12 Monkeys TV series) in order to locate a rumoured World War II wreck. They are successful and even manage to discover the coordinates while there for a treasure named as 'Manchurian Gold'. Before they are able to celebrate their find their boat is ambushed by a small band of pirates led by the sinister Olsen (Kwasi Songui - 300). He decides to head to the coordinates, enlisting the unwilling friends to help him gather the treasure. They arrive to discover a floating graveyard, a seemingly abandoned American warship, which in the games prologue was shown to be the place of an unfolding madness that tore the crew apart in the 1940s. Now the friends must evade Olsen and his men, locate an essential part the pirates took from Triss's boat to stop her escaping, and then flee the nightmarish vessel. 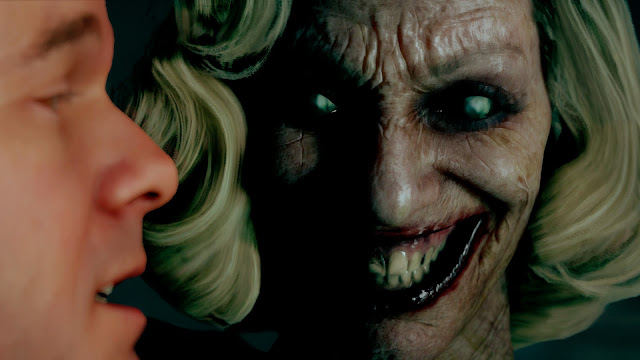 I quickly discovered upon my return to Until Dawn that despite seeming to have a variety of ways the game can play out, the actual story remained quite rigid. With Man of Medan purposely being a shorter length, and not needing to get replay value (as I played this via Xbox Game Pass) I decided whatever decisions ended up happening I would stick with, I wouldn't try and replay chapters to get the optimal outcome. Not counting the prologue set in the 1940's in which you play as two American soldiers, there are five characters you play as, which character you get to play as at any given point is dependent on where the story has headed. On my particular game one of these five characters I managed to get killed very early on in the story, it was interesting to read afterwards that that fate wasn't set in stone and they could have well survived the whole ordeal. As it was I finished the game after roughly three to four hours with three of my cast intact. Not bad, not great, but I felt it added to the authentic feeling of being in a horror movie by having main characters die.
The game itself plays out in a familiar format to Until Dawn. You walk around in third person perspective investigating the doomed warship, story beats dictating when characters get split up, and what part of the boat they happen to be at. I was pleased to see that there are two different sections that take place before the characters reach the boat. Occasionally during one of the many cutscenes there will be a quick time event in which you have to swiftly press the designated button to help out a character. There is one part for instance in which Alex hops across a gap in the floor, getting the prompt correct and he safely makes the jump, I imagine failing and he would have fallen in. A lot of these button prompts are perhaps less urgent than they appear, sure one of them did lead to a character dying, but I missed around a quarter of all prompts and not much extra usually happened that was too bad.
You also get to shape character's responses to situations and conversations by the choices you make. Doing so shapes each of the friends perspectives of each other, and shapes what their designated personality type is. I found it a little hard to roleplay as I can't help but try and be a good person in games, and so there was at least one moment of romance that I feel shouldn't have been there if not for my interfering. 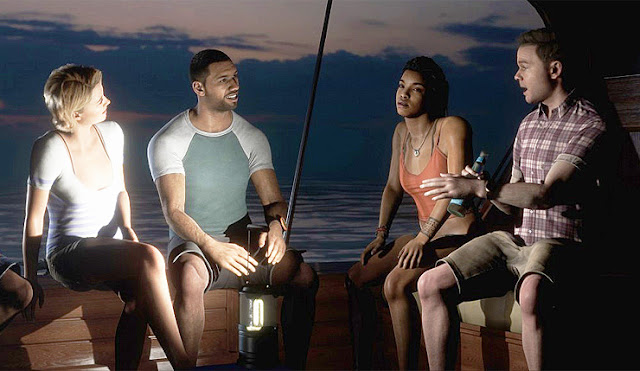 The story itself is on a similar level to Until Dawn. That story was fantastical but as it progresses surprisingly more realistic revelations are revealed. This being set in the same shared universe means that again events are not exactly as they first appear. This is something that the in-game narrator (voiced by Pip Torrens - Preacher TV series) hints at throughout. This character plays a similar part to the Crypt Keeper from Tales From the Crypt and gave a fun performance with his non-judgemental joy he gets at the decisions you, the player makes. I thought the events were all explained a little too quickly, but then being such a short game I guess it isn't that quickly. On that front though, while I knew this would be a shorter game I didn't realise the game's finale was actually that until it was over and the end credits appeared. To me it felt a bit underwhelming that suddenly it was all over with no real fanfare.
The Dark Pictures: Man of Medan was a beautiful looking video game, the character models are strong and the acting for these characters was also great. It was also pretty cool that most the characters here were black. Most the antagonists were black, and for my particular playthrough three of the four friends were black, it felt nice to have a different representation for a change. This 'choose your own adventure' game at three to four hours long was short but creep, I was left wanting more. Man of Medan is definitely worth a play, especially at the moment where you don't have to buy it to do so.
SCORE: