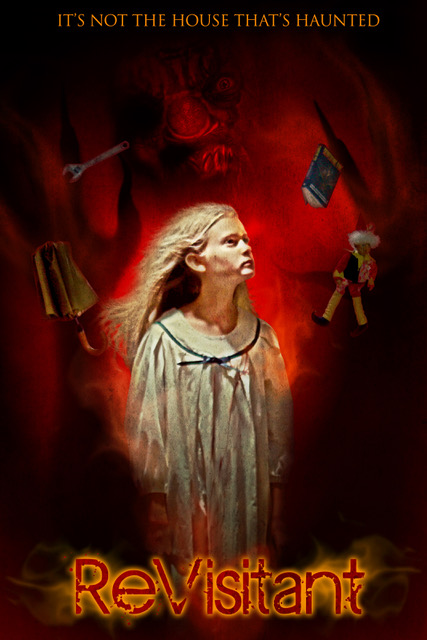 ReVisitant is the sequel to the 2014 horror The Visitant, a film which I had neither seen nor heard of. I hoped that wouldn't stymie my enjoyment of the movie, and that it would be easy to pick things up. Thankfully things are quickly made clear, thanks to what I assume (I could be wrong) was the ending to The Visitant turning up here as a prologue sequence. At first I wasn't sure of the tone that director and co-writer Jon Binkowski (The Visitant, Scare Zone) was going for, but it become clear as the story plays out that this doesn't take itself too seriously.
Maybe a spoiler for the end of the other movie, maybe this was newly created for this sequel, but a woman haunted by a ghost discovers it isn't actually that of her deceased husband. This knowledge is too late to save her from being killed by it, her best friend, Maya (Tracy Wiu - Homeland) discovering her corpse ends up partly possessed by the ghost. Fast forward a year and the previously haunted house is due to be demolished. Upon learning this, Sarah (Jade Rattigan), the young daughter of neighbour Leslie (Lisa Enos Smith), who had been using the deserted house as a den turns up to retrieve her stuff and encounters Maya who happened to be visiting. She ends up inadvertently passing on the ghost possessing her to Leslie who had arrived looking for her daughter. Soon Leslie and her family find themselves in a whole heap of trouble with a possessive ghost. 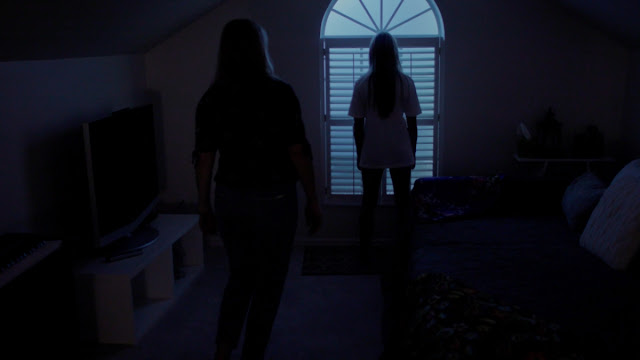 At the films start I found some of the performances, especially that of the character of Sarah to be distractingly over the top and exaggerated. This remained annoying until the early introduction of a trio of comedy characters who appear in a paranormal sequence played for laughs. These characters made me realise that things wouldn't be as straight and serious as it felt like they would be. There are still moments of horror to be found throughout ReVisitant, and even a body count, but the quasi-light hearted tone dispels a lot of the doom and gloom for what is happening. I came to like a lot of the characters here, especially the less used side ones. Griffon (Marc Musso) was the best of these, his introduction was far too late into the movie but every line of his was very entertaining. Going back to Sarah, something happens to this character which makes their over the top performance work a heck of a lot better for a large chunk of the film.
The horror comes mainly from supernatural means. Objects move around on their own, light bulbs shatter, and there are nightmare sequences featuring twisted versions of the cast. These events remain slight throughout most of this, really ramping up in the third act. Throughout there are moments of ramped up terror, such as when Leslie's home gets assaulted. I did like how dramatically crazy these sequences get, the kind of things you would expect to see at the end of a less action packed horror film. The possession aspect increases as the film plays out. The ghost has the ability to switch between different people, and each time it does it seems to be able to control its victim more completely. This leads up to some great possession scenes including floating characters, and lots of snarling! 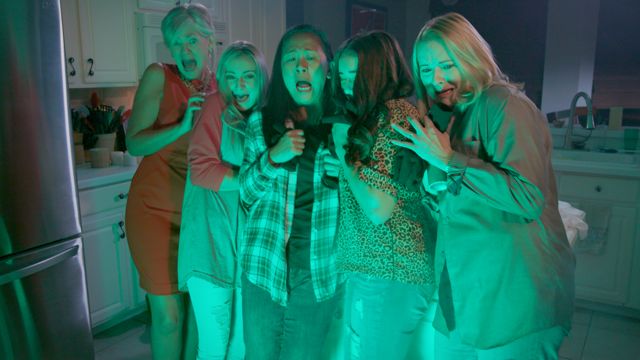 Being honest I didn't expect this indie horror would be that much fun to watch. It actually was though. It isn't scary, and it takes a while for the story to get to a point where it was compelling, but with some neat side characters and a decent finale I came away from this not blown away, but having had a nice time. Terror Films have acquired worldwide digital rights to ReVisitant, the film made its worldwide debut on March 5th on the Kings of Horror YouTube channel and will be release across multiple digital platforms from April 16th.
SCORE: