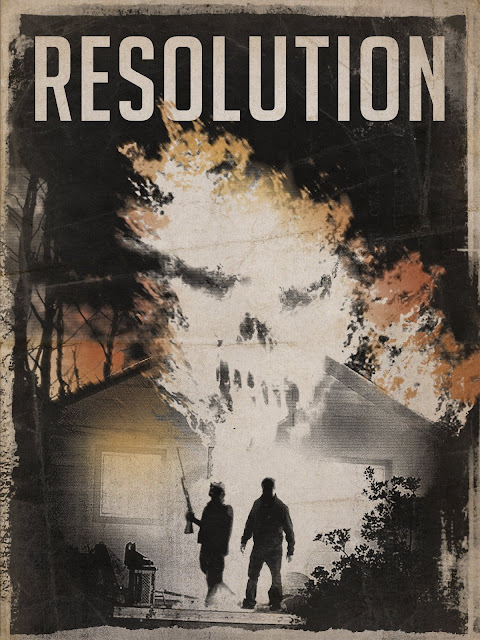 I have long bemoaned the fact that horror films just do not scare me anymore. Even ones touted as 'scariest film ever made' etc leave me cold, even if they still happen to be good movies outside of the ability to give fear. I stumbled across Resolution after reading an article that mentioned the 2017 horror film The Endless. The article (about the best horror films to watch on Netflix) in its description for The Endless said to really get the most out of the film you should watch Resolution, as it was a spiritual sequel to that one. Boy am I glad I did as this managed to maintain a pervasive sense of chilled terror from beginning to end. The fact that something here is obviously not right, yet there is no real indication as to just what is not right led to my mind thinking up all sorts of unknown horror. I have seen this described as an indie The Cabin in the Woods and there are enough meta moments contained here to support that theory.

One day Michael (Peter Cilella - Dementia) receives a video that shows his former best friend; Chris (Vinny Curran - Spring) out in the country. Along with the video was a map showing the location of Chris's home. Chris is a drug addict and had moved away from the city after his behaviour lost him all his friends. Against the wishes of his wife, Michael decides he is going to make one last attempt to help his friend and so heads out to the dilapidated cabin with the singular aim of getting him clean. After his persuasion to get him to go to rehab fails Michael takes the drastic step of tazing Chris and handcuffing him to a pipe in his house. He tells him that if Chris still wants to do drugs after he has gotten past eight days of withdrawal then he will leave him to do what he wants, but that he wants one last try to save him. As the days pass Michael starts to discover strange recordings left around the cabin, videotapes, records, photos books and more, all seemingly left on purpose to be found by him, and all showing grisly stories. With nothing else to do and with his curiosity getting the better of him he decides to follow the trail that has been left for him by persons unknown. 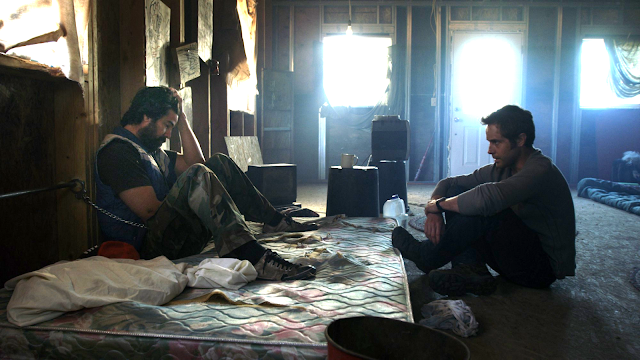 That Resolution manages to be so darn creepy without actually showing much is testament to the skill of the directors, Justin Benson and Aaron Moorhead (Spring), with Benson also writing the story here. The unknowable is always more unsettling than actually showing something and so the constant appearance of these forms of media, coming from someone who seems to be secretly filming the duo made for an overwhelming sense of unease. They may be out in the middle of nowhere but the place is filled with suspicious and nefarious characters. There are a whole host of random people encountered, including members of a religious cult, angry native Americans, rednecks, homeless cave dwelling addicts, a bizarre Frenchman (a great scene featuring iconic horror actor Bill Oberst Jr - DIS), and a mysterious dog named Sarah. With everyone Michael meets hiding secrets, and the isolation of his character as he wanders the fields and hills of the surrounding area there is an outsider vibe going on. The casting here is great, especially so with Michael and Chris. The former may be a little bland, an everyman character, but he is revealed to have more flaws than he first seems to. Chris on the other hand almost takes on the role of a comedy character. It was amusing how Michael is off doing all this weird horror movie stuff while Chris is literally stuck at home bemused by all the wild stories he is being told. It felt like they were co-existing in two different genres at the same time.

The many forms of media that are discovered brought to mind both Sinister and the underrated Screen. The footage is often shown as grainy and hard to see, the recordings are scratchy, but all are united in telling stories that often seem to end with the principal 'character' dead. That, as the film progress these stories begin to get a lot more personal to the duo felt like a natural ramping up of the stakes. Initially it felt these weird occurrences were not enough to reasonably scare off the protagonists, but by the time they are its too late. I love films that mess with the concept of time, here you have that with little snippets that appear to be occurring from the future, this just adds to the feeling of odd dread. I also appreciated that there is no real explanation for what is going on, there is not really any big reveal that appears at the end, instead no end of characters speak cryptically about events that may or may not be true. Chris is paranoid that the government are spying on him, other people talk of strange electrical energies in the area, while others talk of strange rituals and aliens. The amount of conspiracy theories create a feeling of otherworldliness to the strange location. This is used in the film making also with there being film damage appearing on screen at times despite the filmed footage being clear. There are also repeatedly the use of subtle camera angles that are not quite static, as if the footage was being shot from a person's perspective rather than a steady camera. This helped to create a slight meta feel, I have heard some interpretations of this that back up the idea of this being an indie  The Cabin in the Woods, albeit told in a much more subdued fashion. Resolution is exactly the type of horror that really appeals to me. Using the familiar to tell a strange story, such as creepy recorded footage, a protagonist getting pulled into events way out of their control without realising it is happening, and a general sense of unease combined to make for something that I was powerless to stop watching, yet felt uncomfortable throughout. I shall be checking out The Endless soon, that's for certain. Resolution is currently streaming on Amazon Prime.