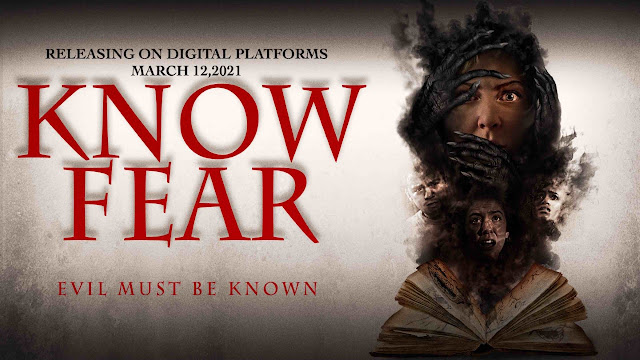 I've said it many times before, but demonic possession has always been one of my favourite genres of horror, I think this stems back to The Evil Dead. That is kind of fitting in the case of Know Fear as there were elements in this Jamison M. LoCascio (Sunset, The Depths) directed indie horror (co-written by LoCascio and Adam Ambrosio) that gave this a slight feeling of that classic, but set in a suburban house rather than at a remote cabin. This may be slightly rough around the edges in places but in general I appreciated a lot of what the film was going for.
Donald (David Alan Basche - The Exes TV series) and his wife Wendy (Amy Carlson - Green Lantern) have recently moved into a new house. While unpacking they come across a box left by the previous owners, and it is while looking in this box that Wendy accidentally cuts her finger, the blood from which happens to fall onto the page of a strange book. After Wendy begins to start behaving strangely her niece, Jami (Mallory Bechtel - Hereditary) who is obsessed with the paranormal, comes to believe that her aunt has been affected by a demon. She realises the strange book is actually a magical guide to dispelling demonic forces, but that it requires three people to operate it successfully. Without letting anyone know what she is doing Jami activates the book, this seems to alert the demon (for there actually is one) who magically seals the doors to the house to stop anyone from leaving. To banish the demon using the book three people are needed, one who gets the power to understand the demon's language, Donald, one who gets the power to see the demon, Jami, and one who is able to hear the demon speak, Jami's brother Charlie (Jack DiFalco - Daredevil). They, along with a family friend who had just happened to be visiting; Nancy (Meeya Davis - Orange Is the New Black) must work together to try and save themselves. 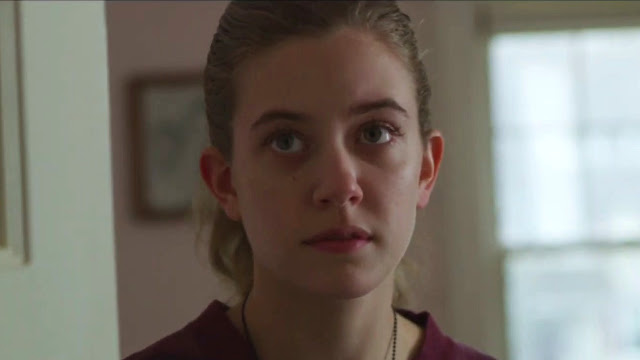 When it is just Wendy (an actress sadly wasted in a role that saw her out the picture for the majority of the films runtime) things seemed mild and typical for a horror like this. I was prepared for a well meaning, but ultimately dull experience, so it was a neat thing to discover that from the second act onwards the stakes raise considerably. This did have the unintended effect of making that first act a little bland, it was full of moments that I didn't think worked that well. The prologue which shows the previous family all dying was neat, no complaint with that. But there are moments and scenes that felt like they didn't add anything at all. One early example is a scene featuring Jami off filming a video for her paranormal YouTube channel thing. I felt like the only reason this featured was to show the character believes in the paranormal, it just wasn't needed. Then you have Donald (who comes across as a much more down to earth guy in his first scenes than later on in the movie) teaching his nephew about the wisdom of the 'pale blue dot' which is referenced time and time again over the course of the film but came across as a bit of a silly notion in the context of what was happening.
I thought the concept of three different characters each with a unique ability to recognise some aspect of the evil was cool. It was like the three wise monkeys, but inverted to be 'speak evil' 'hear evil' and 'see evil'. I liked the idea as well that the book was both a huge boon and a huge hinderance to the group. Sure, Charlie can hear evil, but being able to hear it means he is prone to vomiting and convulsions from the sound. Likewise, Jami may be able to see the demon, but the sight of it paralysis her with fear making her unable to properly convey what it looks like. This double edged sword aspect was cool. It was represented in a neat way as well. The sound the demon makes really did sound unique, demonic outside of the typical way demons sound in films. There were effective moments with Jami as well, a great line where she describes being able to see this strange symbols everywhere, even when her eyes were closed.

Occasionally the indie feel of Know Fear became a little apparent, generally though there was some nice atmosphere built here. I liked how bloody this got, each of the characters having their own moment of pain that never failed to make me squirm, whether that be putting their hand onto a boiling pan, or getting a drill inserted into their chest, it always looked good and used practical effects with plenty of blood. It could be argued the story is a little basic, but I actually liked how quickly it got down to business, especially after that first act which didn't really stick much in the mind. The characters themselves didn't have much to them, but they worked, though I felt that if Wendy had been written out completely it wouldn't have affected the story much.
I'm always going to have time for demonic possession films, and this was one of the more enjoyable ones I've seen lately thanks to the nice practical effects, and the feeling of inventiveness with the use and powers of the journal. It all leads up to a fun late film twist, ending in a way that felt very appropriate for a horror, without resorting to cheap jump scares. Know Fear came out on March 12th.
SCORE: