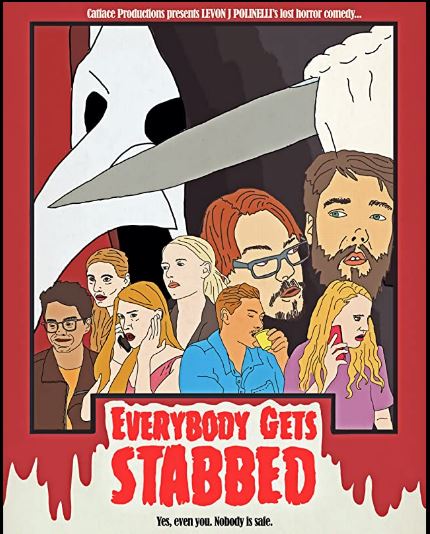 I'm having a bed day today due to some flu type side effects of having the Covid vaccine and so I thought rather than waste the day I would instead watch of bunch of movies I've been sent for review. First off was the Australian indie comedy horror film Everybody Gets Stabbed. This was the directorial debut of Levon Polinelli who also co-wrote this alongside the movies two main actors, Daniel Buckle and Nick Pages-Oliver. To do a lazy summary this film is basically an indie hipster version of Scream if the antagonists were the main characters.

Best friends Clive (Pages-Oliver) and Desmond (Buckle) have decided to kill all their friends for reasons that are a lot lamer than the ones they initially provide. Desmond is a closet gay man, indirectly suggesting early on that the pent up stress of hiding his secret has led him down this dark path. Clive on the other hand suggests his reasons are that everybody likes him, yet secretly he is just a plain nasty person. As the body count ramps up the two attempt to frame one of their friends for the crimes, and as the tension between the two killers increases one of them begins to wonder just how far is too far. 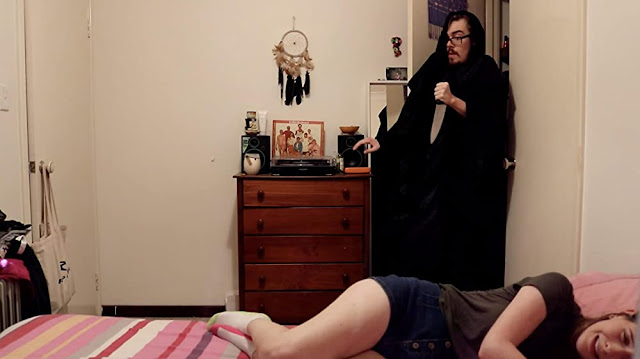 I expected Everybody Gets Stabbed to be mean spirited in its comedic elements. Having obvious bad guys as the leads meant things are always shown from their perspective. Strangely these two are quite interesting leads in how normal they come across. They are not likeable, yet neither are they unlikeable, the chilled, laid back and consequence free actions they take are at odds with the bloody bodycount they ramp up. This spreads across all the characters with Clive and Desmond's friends mainly being made up of undeveloped characters. It makes the. Their roles can be seen as a commentary on white male privilege, both believe their actions are right and are too flawed to see the problem really is with them.

The humour is very dry and quite black at times. One early scene has them attempt to write out a message using their victims entrails, but just results in them both vomiting everywhere. Another memorable scene has them hiding in a potential victims house, loudly bickering until they suddenly hear their victim arriving home. The tone for Everybody Gets Stabbed works because everybody are idiots. The killers are idiots (such as Desmond picking caught hair off of his mask and dropping them on the floor next to a victim). The victims are idiots, oblivious to the super obvious and permanently suspicious sounding Clive. The police are also idiots, represented solely by Paul Montague's role as a Detective. The police station scene was a highlight with how dumb the dialogue was between the Detective and Clive.There were a few attempts to tell jokes around perceived racism, but the first attempt during the film's prologue fell flat and gave a bad first impression. 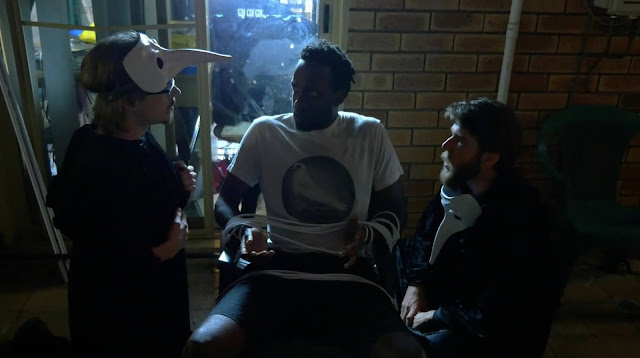 If this film was being rated on music alone this would have easily received a 10/10 rotting heads. Both the score and soundtrack are perfect. The score is by Ash Gibson Greig and isn't what you might expect at times. Most the slasher scenes are accompanied by this dirty sounding discordant industrial music, a very unique sound that somehow just works, much better than a written description would suggest. Then there is the soundtrack with plenty of chilled out hipster style songs that add a lot to the scenes they are used for. The opening of the third act that sees Clive and Desmond arriving at a party was much more effective thanks to the song choice that plays as they enter the room.
The special effects are not as good, the look of this film screams low budget, this isn't a problem thanks to the actors who were all good in their roles and frequently interesting camera shots, such as tracking a character through their windows as they walk around their house. The knife stabs seemed to lack impact a lot of the time, but there was still enough blood to sell these scenes. This culminates in a lovely shot as one of the killers rubs blood dementedly over their face. The finale was as stab happy as the film's title would suggest making for a fun finish.

Everybody Gets Stabbed is a weird comedy horror. It is full of dumb characters making stupid decisions for bad reasons, yet the chilled vibe contrasted weirdly well with the moments of violence making for something quite unlike much else out there. Everybody Gets Stabbed from Catface Productions has been acquired by Bayview Entertainment for the horror label HNN Presents.

Posted by Daniel Simmonds at 12:37