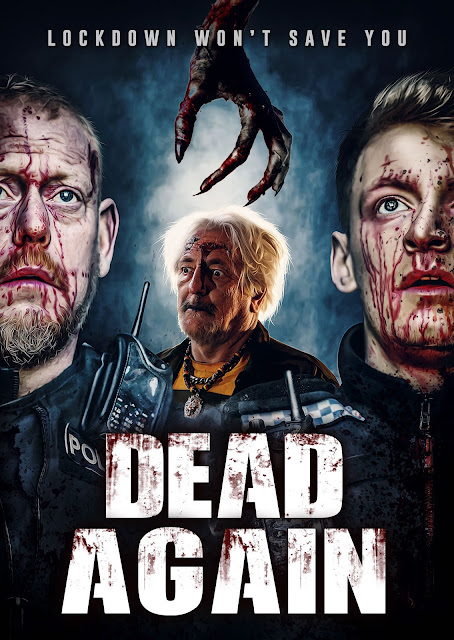 As you might have guessed from my blog's title, I am a huge fan of zombie films. I have said many times previously, but often you don't need to have much of a budget to make an entertaining one. Much like the blog posts I write, with zombie films it is quantity not quality that matters, so even with minimal make-up effects, sheer numbers can increase the enjoyment regardless. Steven M. Smith's Dead Again is a U.K comedy zombie horror film that despite being low on originality at all still is competent enough to be a middle of the road, yet enjoyable film.
PC Brody (Elliot Cable - Incubus, Scare Attraction) is fresh out of police training school and has been assigned to the small sleepy village of Little Pitchfield. He is teamed up with PS Cooper (Tony Fadil - Web Crawler) who informs the eager Brody that there hasn't been a single crime in the village for 17 years. It is Brody's bad luck then that his first day coincides with an outbreak of flesh hungry undead, something that could possibly relate to an incident from the village's past. 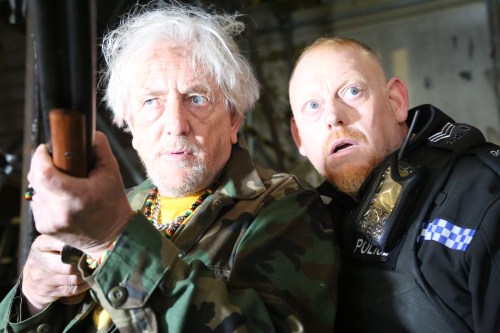 While this is described as partly a comedy that part of the movie is thankfully underplayed. The humour didn't really hit very well, but thankfully it is mainly restricted to Cooper, and mainly appears with him using classic movie references that Brody, born in the 90's doesn't understand. Outside of this the film felt a lot more serious than expected which due to the comedy failing isn't actually a bad thing. I had been concerned the humour would be distasteful or mean spirited. It wasn't, aside from the decision to use real life footage of world leaders talking about the Covid 19 pandemic as the film's prologue (to create the false impression they are talking about zombie apocalypse), I felt that was in poor taste. At an initial glance Dead Again looks like a lazy mash-up between Shaun of the Dead and Hot Fuzz. A small, sleepy village devoid of crime, an eager new transfer determined to uphold the law in all its forms, and the progression of the character arcs are all Hot Fuzz. Obviously it is the undead that echoes Shaun of the Dead, also that Cooper even looks a bit like Simon Pegg and shares his first name with that other zombie film protagonist.
With the film opening on news reports of worldwide apocalypse the events of the movie proper take place three days earlier, I always enjoy that plot device as it always leads to questions on how everything escalates to the present. The plot here is very basic, and it is full of very little surprises. You get all the usual zombie film and horror film tropes you would expect, characters getting bitten and hiding that fact, characters going off on their own and saying "I'll be right back". Some of this is very knowing, afterall, every character here knows what a zombie is from media and so are all quickly satisfied that is what they are facing. You would think with Cooper working in the village for 25 years he might express more sorrow for all the undead he is killing, but there was only a single moment that has him commenting on having previously known one of them. Due to the indie nature of this the majority of the film takes place in the one location. A manor house fallen into disrepair is this location and it looks quite cool. 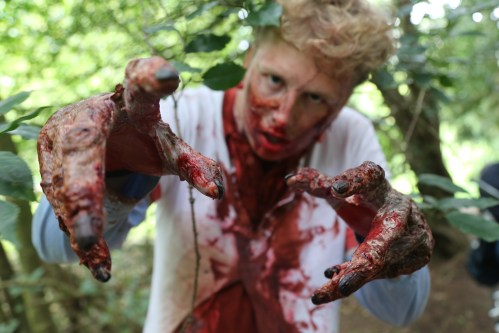 How do the zombies fare then? They are make or break for this genre after all. Here, there are plenty of them, yet it is only really the third act where the numbers increase dramatically on screen. Before this they are only seen in bunches of three or four, though their moans are ever present. The undead have red on them, and some have make-up effects to simulate bites and tears on their flesh, but nothing too major. That's about it for them, their eyes are normal, but at least there were not scene breaking moments of the actors playing the ghouls getting carried away and grinning, nor are there an abundance of heavily pierced and tattooed ones (bizarrely that can be a problem with indie zombie horrors). When the action breaks out proper in the third act there is at least one extended battling scenes which I enjoyed a lot. It's obvious that a lot of the blood spurts and wounds inflicted are digitally added but they don't stand out as much as to ruin the effect of what is happening.
Dead Again is an adequate zombie movie. It doesn't have an original bone in its rotting body, yet with this genre average is still able to entertain. I love the undead, and with this movie it might not be setting the world on fire but was still decent enough. Dead Again is out now from ITN.
SCORE:

This was a good review, thanks! I've linked your post in our article about this movie: Dead Again, movie (2021)

Thanks, your article about it was interesting.