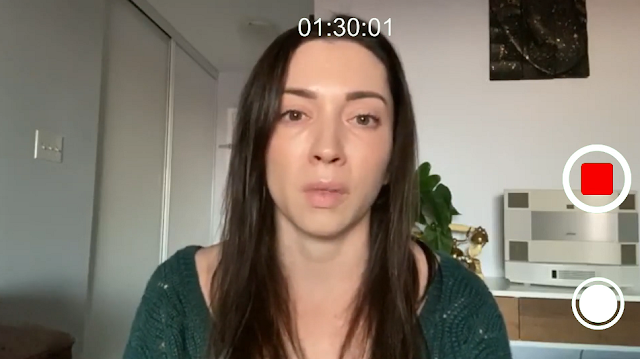 Over the past year Andrew J.D Robinson (We Are the Missing, The Becky Carmichael Fan Club) has produced a few microshorts, the latest one of which is Confessions of a Haunting... which he both wrote and directed. This three minute horror takes the form of a recorded video message and features just the one onscreen character, actress, Julie Mainville (We Are the Missing, Butchers).

The set-up of a video message lends itself well to a short horror, and thankfully a good protagonist was chosen in the form of Mainville whose character speaks with conviction. There are some good lines here, in particular one stood out "Horror is being afraid of losing something...true horror is knowing you had lost something" which in the context of what is being spoken about was quite effective. The supernatural element of this short comes towards the end and made for something that was different to the typical jump scare you might expect, instead more of an optimistic feel was gone for, which I hadn't expected.

Regardless of the direction this went to, it managed to tell a contained story well, especially in such a short timeframe. This succeeded due to the actress used. Confessions of a Haunting... is currently on YouTube so definitely check it out.

Posted by Daniel Simmonds at 06:01