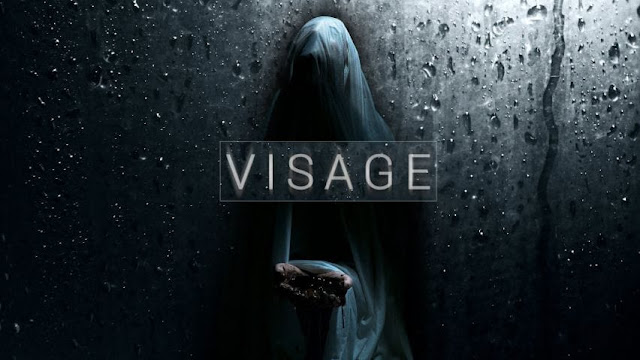 Way back towards the end of November last year I was given a code for horror video game Visage. This game was heavily influenced by the infamous P.T demo and like that this takes entirely within the confines of a suburban home. I had heard this was a scary game, maybe I am broken, or maybe I am far too used to being fully immersed in horror VR games but I didn't think the game was scary, outside of a few jump scares at least. I had hoped for sustained dread but that never really ever came.

Set in the 1980s, you play as Dwayne Anderson, a man who in the game's prologue is seen in the basement of his home murdering his wife and children before turning the gun on himself (all disturbingly shown via his perspective). He mysteriously awakes alone upstairs in the house during a dark and rainy night. Dwayne receives a phone call from a concerned neighbour who says she is worried about him as he hasn't left his house in over three weeks. It soon turns out the reason for this is due to the fact both the front door and back door are strangely jammed shut. As he explores the house he comes across mementos from different people who have lived there previously, these mementos trigger supernatural events to occur, revolving around these people. 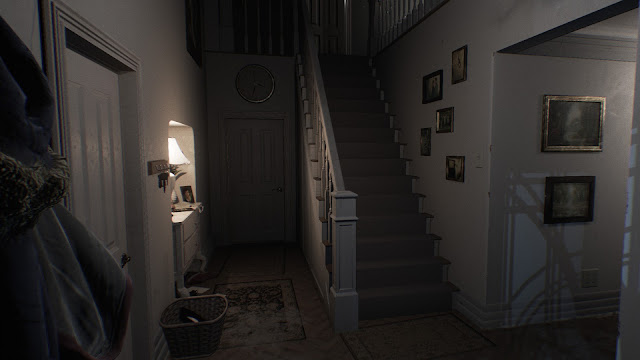 Visage is a first person 'walking simulator' in which you solve simple puzzles while struggling to retain your sanity. As long as you are in light you are fine, but as soon as you step into darkness your sanity metre begins to fill. Spend too long with your sanity metre high and eventually it will result in death at the hands of one of the spirits haunting the house. There is no combat to be found here, instead the ghosts you come across must be avoided. This felt like an anthology of sorts as each of the three different chapters you access are self contained. Wandering around the house outside of the chapters is relatively peril free, sure you can still succumb to the darkness but there isn't any spiritual danger to watch out for. It felt almost like the more peaceful moments of the Silent Hill world. It is starting a chapter where the danger really begins.

Chapters can be played in any order and change up the game world in interesting ways. I started with Dorlores' Chapter which I think was the very best Visage had to offer. Starting this resulted in strange mirrors appearing around the three floor house, entering these mirrors would take you to strange nightmare locations that had little tasks for you to solve. This chapter also featured a wormhole that would take you from the top floors to the sealed off basement. I figured this was to hide loading times, not realising that this was only to be used during the particular chapter. Dorlores was a woman suffering a form of early onset dementia that her husband feared would lead to her harming their newborn child.
The second chapter I played was Rakan's Chapter which revolved around a paranoid schizophrenic. The majority of this one saw you flitting back and forth between the house and a large hospital location. This led to a realisation about one of Visage's faults. When exploring the house your sanity is always a concern, yet going to a location not of the house and the sanity metre would no longer be in effect. This meant that rather than be frightened of the more twisted and bizarre places I was actually relieved that I didn't have to worry about that part of the game for a time.
The final chapter on my playthrough was Lucy's Chapter that was short but sweet. This one is about a little girl who seems to have came into contact with a demonic entity via a TV. This had the great concept of plunging the whole house into darkness, using a camera's flash to not only light up your way, but to reveal hidden messages on the walls of the house.
There is a vaguely secret fourth chapter which is all about Dwayne himself, videotapes hidden around the house when played in the VHS player lead to one of seven different mini chapters about a different facet of his personal story. 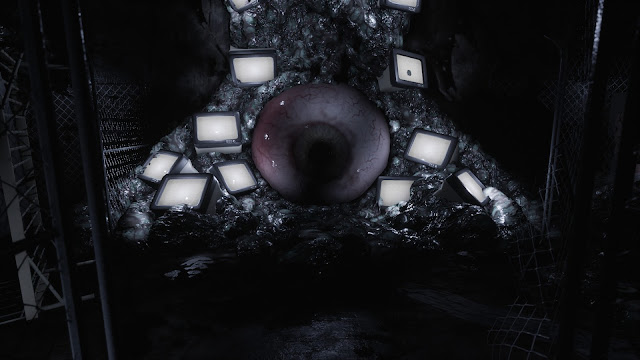 Visage took me roughly ten hours to get through, and a whole chunk of that was me utterly lost with no clue on how I should be proceeding. This created a frustrating stop and start approach of me briefly making progress before once again getting stuck for seemingly hours at a time. I think being trapped in the house for so long was one of the reasons I didn't find this scary, after all familiarity breeds contempt. The timing of this game meant that the majority of the time I had been playing it I was in lockdown in real life. I began to draw parallels between Dwayne trapped in his house, and me technically trapped in my house. This made the game more atmospheric at times, especially once when I was playing this in the dead of night a thunderstorm was raging outside, matching the in game with not only the time,but also the same weather conditions. One of the reasons this took me so long to play through was I wanted to give it the respect it deserved and so only played when it was night.

I can't help but be disappointed this wasn't the terrifying game I wanted it to be. If this had been playable in VR it would have been so frightening, I couldn't help but lament that this was not possible. I also found the inventory system to be really clunky and unwieldy. Swapping items in and out of that, and dropping items you didn't need was always much more of a hassle than it should have been. Then there is the lack of direction. I really appreciate that the game doesn't hold your hand and tell you what you should be doing, but it did have the opposite effect of me often exasperated and slowly going insane as I walk around the same rooms and corridors clueless for hours at a time. Overall though, despite its faults, and despite its core story not really being that interesting (Dwayne is such a dull lifeless protagonist) this was a decent horror game, I just wish it had managed to sustain a creepy Sinister level of moment to moment dread. I have a complete playthrough of Visage on my YouTube channel, I will include the very first video below.

Posted by Daniel Simmonds at 02:25