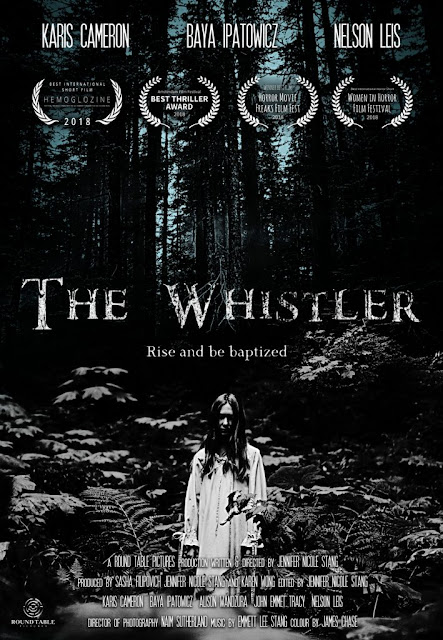 The Whistler is a short 11 minute horror film that I believe was based on a real life myth. it was written and directed by Jennifer Nicole Stang (The Devil's Snare) and blends in religious overtones to its haunting runtime.

Lindsey (Karis Cameron - R.L Stine's The Haunting Hour) is babysitting her younger sister Rebecca (Baya Ipatowicz) and before the girl heads to bed she requests a bedtime story. Lindsey is given the legend of 'The Whistler' to read, but she decides to go off script and tell her sister a more grisly version of this tale. She talks about a mass murderer of virgins who at his execution promised to one day return. Later, after Rebecca has gone to bed Lindsey also falls asleep, she awakens to discover her sister is missing and a strange whistling noise coming from the nearby woods...

The whole set-up of babysitting a younger child by woods immediately brought to mind Child Eater, both felt very similar, it wasn't until the location changed to the woods that this branched out into something different. Once the setting had changed though is where The Whistler improved, I'm not usually that keen on drone shots but here they were restrained in their use and led to some nice images at the end. The titular whistler itself is barely shown which was a nice idea. The quality of this short was evident, but I wasn't so sure about the pupil-less eyes, they looked a little too clean and sterile. As to the story, it may not have been original for much of the run time, but I did like where this ended up, I liked the religious elements as well as the bait and switch that occured.

The Whistler was a well shot short horror that didn't manage to outstay its welcome. I would say I would be interested to see how this would fare as a feature length, but the full version of Child Eater showed that sometimes a short really should just stay a short. The Whistler is available to stream on Shudder.