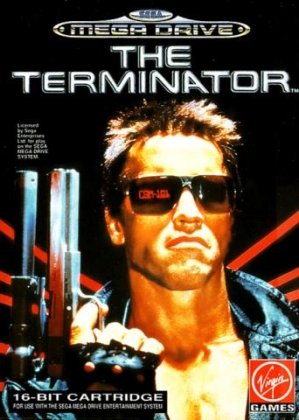 The film version of The Terminator came out in 1984, but it was around the early nineties when the sublime Terminator 2: Judgement Day was so successful, that a whole host of video games started to be made, including versions based on the first movie. The Mega Drive/Genesis, Master System, and Game Gear versions were all similar. With only four levels and short levels this is a game that can be finished within fifteen minutes. As fun as this is that very short play time has to be taken into consideration.

In the far future of 2029 the world has almost been destroyed after the machines rose up and attempted to annihilate mankind. The humans fought back under the leadership of John Connor, and they were close to winning the war. In desperation the machines decided to send one of their own back in time. The plan was to kill Sarah Connor - the mother of John, in order that he never be born. To counter this John sends back one of his best soldiers - Kyle Reese in order to stop this relentless killer. 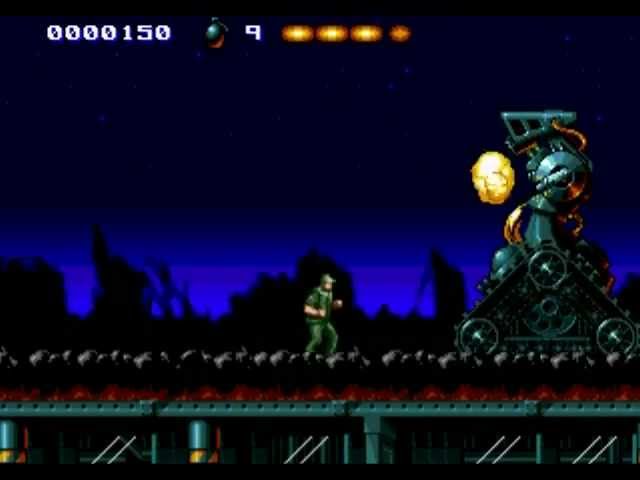 So with just four levels how do you tell the entire plot of the film? I'm not complaining about this, but bizarrely the first level takes place outside of the film. This has you as Kyle Reese (armed only with grenades) assaulting a cyberdyne base in 2029. Having your protagonist equipped with only hand grenades at the very start of a game was a bold move, as was the very first enemy you face in the game being a mini boss. Partway through you get access to a machine gun that leads to a much easier second half of the level.
The second level has you back in the past and is set around and in the nightclub where Reese first meets Sarah. From this level onwards Reese is decked out in a trenchcoat and armed with a shotgun. The main enemy in the game are the Police, and much like the Terminator itself these cannot be killed, only stunned briefly. I think this was due to Germany at the time having strict censorship laws about only being able to kill monsters, aliens and criminals (I may be mistaken, killing innocent cops seems wrong however you spin it). This was my favourite level of the game with some lovely animations when Reese swings off poles and vaults over bins. The Terminator shows up as a boss, but is very easy, knock it over three times and it is stunned allowing you to meet Sarah and end the level.

The third level is another good one and takes place in the police station that is under assault by the Terminator. Battling cops and criminals, as well as a second appearance of the titular robot it is far more linear than it at first appears.
The final level takes place in the factory setting from the film's finale. The only enemy is the robotic form of the Terminator who you must lure to the machine press at the levels end, avoiding getting trapped into a corner by him along the way. And that is it, a very short game. To try and make it last longer you only have the one life, lose that and you are back to the game's title screen. Thankfully while it is extremely short it is also fun to play. The controls are fluid and responsive, while the music and animations are both good. 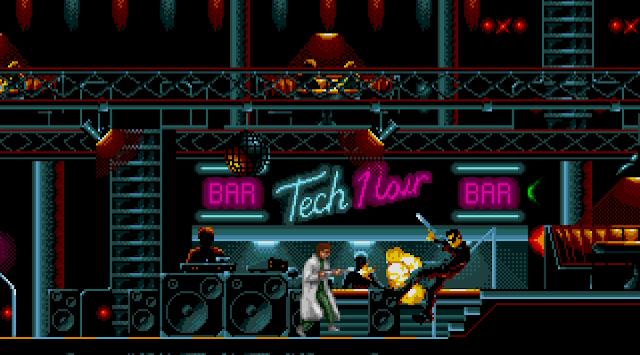 Picking The Terminator up cheap you will have plenty of fun here. I think if you had brought this around the time of its release you may have felt very short changed by this, I don't know why the game is so short, whether it was intended to be longer, or they just run out of time, who knows. Check out my very poorly filmed playthrough of this below.