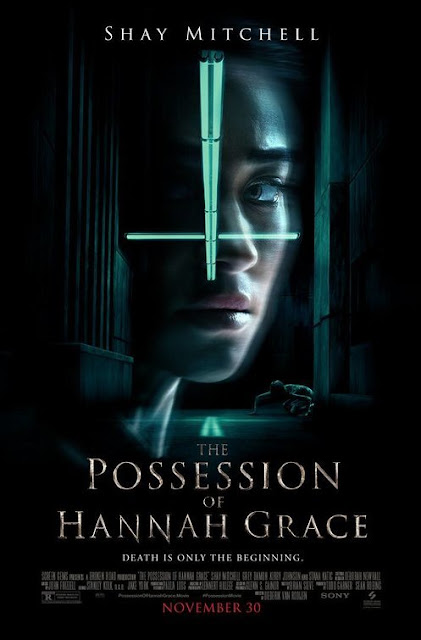 The Possession of Hannah Grace is another entry in the unexpected subgenre of 'morgue horror' that includes such entries as The Corpse of Anna Fritz and The Autopsy of Jane Doe. In particular it is that last one that this seemed to be (perhaps) coincidentally similar to. Both feature a dark, dank morgue, a small number of characters, and a corpse that is not as lifeless as it first appears to be. As much as I enjoyed this movie, due to the similarities of the more effective Jane Doe I had to mark it down slightly. This was directed by Diederik Van Rooijen and written by Brian Sieve (Scream: The TV Series, Boogeyman 2 & 3).

Former cop and recovering addict Megan Reed (Shay Mitchell - Pretty Little Liars TV series) has recently gotten a job working nights in the Boston Hospital morgue, thanks to her A.A sponsor, Lisa (Stana Katic - Castle TV series). On her second night, there is an arrival of a corpse of a young woman, the titular Hannah Grace (Kirby Johnson) and from this point onwards things begin to take a turn for the dangerously surreal. It seems the corpse may in fact be a host for a demon, and that this demon has the power to regenerate its host's body by killing anyone who gets too close. 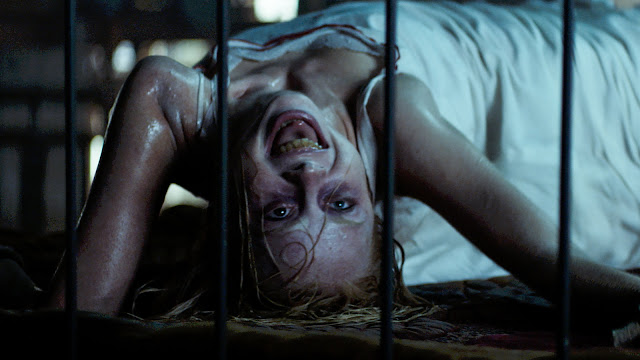 From the prologue showing a dangerous exorcism of Hannah that results in the violent death of one of the priests it is clear that the demonic angle shown here is very real. I felt that maybe that wasn't an ideal move as with Megan being a recovering addict, and still suffering PTSD due to an incident that led to the death of her former partner when she was still a cop it felt like those parts of her character could have been used to make the viewer question if what was going on was actually just all in her damaged mind. At times that is what attempts to happen, yet due to the prologue it is clear that isn't a factor. This was sometimes put to use in order to make Megan appear like she is crazy to other people she talks to, but as the demonic aspect is very real here it never becomes a focal point of the story.

I feel the best part of The Possession were the characters used throughout. Megan herself was likeable enough, but it was the side characters who I really enjoyed, even the more one dimensional ones shined. Often I cannot stand comedy characters in serious films, but that is kind of what you get with the dorky security guard Dave (Maximillian McNamara - The Equalizer 2, From Dusk Till Dawn: The Series). He was someone I enjoyed so much that I came to wishing there was some sort of spin-off TV show starring him! Maybe the other security guard, the jaded Ernie (Jacob Ming-Trent - Watchmen TV series) was a bit one dimensional, but other side characters such as Megan's cop ex-boyfriend Andrew (Grey Damon - American Horror Story TV series) and even the chilled paramedic Randy (Nick Thune - Venom, Dave Made a Maze) are shown to have layers to them that help shape the protagonist's character over the course of the film. 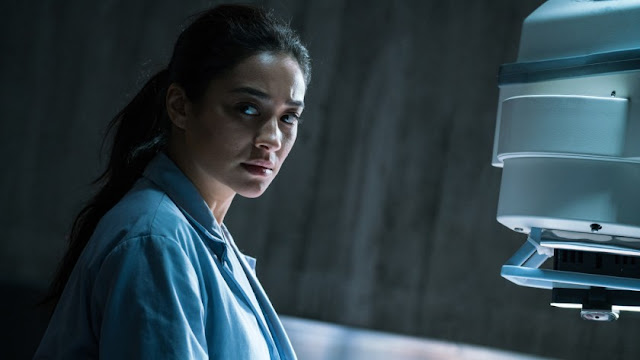 Where The Autopsy featured a small mortuary, this one features a huge one, all stark concrete and strip lighting (coincidentally in a crucifix pattern). It is due to the isolation of the main lead, and the dark oppressive layout of the cold morgue that it becomes an atmospheric location. Outside of the kill scenes (this has a higher body count that it at first seems there would be) the horror comes from the corpse who manages to get around quite a lot, while also managing to not move too much. It was fun seeing the body move when characters aren't looking at it, and the use of light and shadow, as well as glitchy surveillance footage to position it around the location effectively. I get that the character of Megan needed other characters to bounce dialogue off of, but due to the larger than expected cast it felt some of the horror was lost as she never felt as alone and isolated as it may look at a first glance.

The Possession of Hannah Grace was a decent horror film, but one whose lack of originality meant it didn't have as much of an impact as it could have. Personally, I love demonic possession in films so this was a film I was going to enjoy more than if that element hadn't been featured. It did however feel like a bigger budget version of The Autopsy of Jane Doe, it shared quite a similar story. Even though this was a slickly made and enjoyable (but not scary) film, and even though it has a great cast, this didn't manage to be as good. I did like the heady parallel in the story that worked at comparing the events to the recovery of an addict though. The Possession of Hannah Grace is currently available to stream on Netflix.