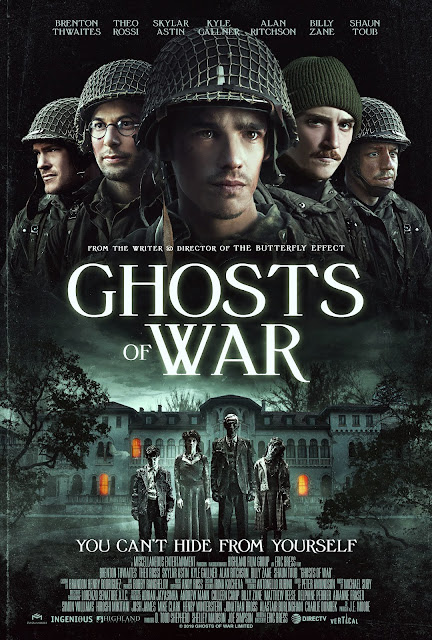 Over the years there have been many horror films set during the first and second world wars. It seems this blend of horror and war is a decent fit. Here, this one is set during World War II. Despite featuring a pretty darn cool twist twenty minutes before the movie's conclusion there are just a few too many heavy handed hints dotted throughout that spoil this twist slightly. This was directed and written by Eric Bress (whose sole previously directed film was the mind bending time travel horror The Butterfly Effect). This one is suitably mind bending also, though the films additional final twist doesn't make too much sense.

It is World War II and a small squad of war weary American soldiers arrive at a French Chateau that has recently been liberated from Nazis. The five man group include team leader Chris (Brenton Thwaites - Office Uprising, Oculus), unhinged Tappert (Kyle Gallner - The Walking Dead, A Nightmare on Elm Street), tough guy Butchie (Alan Ritchson - Office Uprising, Black Mirror), rogue Kirk (Theo Rossi - Luke Cage), and nerdy Eugene (Skylar Astin). It isn't long into their assignment when they come to realise the mansion they are situated at is haunted. It appears that the family who lived there had been murdered by Nazis and have returned as vengeful ghosts... 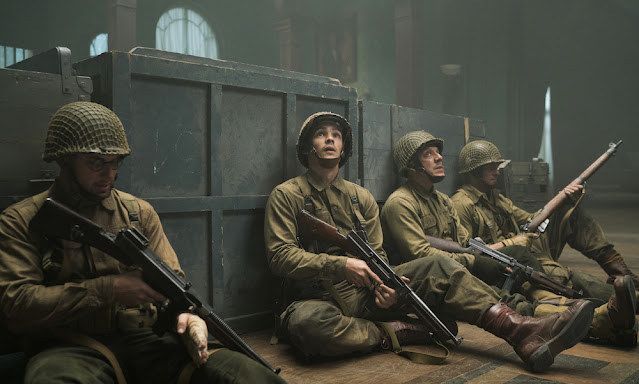 I had an inkling where the story would eventually end up and I was almost right. To be fair it isn't difficult to come to that conclusion when there are so many hints dropped. Some of these are really obscure, of course that is a good thing. Other clues are introduced much less effectively, such as particular stories that are brought up supposedly as a way to make general conversation, yet have content that is very relevant to what is going on. There was a good vibe here from the off, the forties setting feels authentic and there are some good looking effects here, the make-up effects in particular looked great all the time. The cast may be slight caricatures but this does mean each character stands out from the others. The shared history these five have is successful in making feel like people who have known each other for a while.

There is horror here of a supernatural nature and it does everything you would expect. Plenty of jump scares of ghosts suddenly appearing, doors slamming, strange noises heard, and nightmare sequences. This part didn't feel that original. Every now and again, to remind the viewer this is taking place during war time there are action sequences, particularly early on, and again at the midpoint of the film. These battle scenes help add excitement to the more morose parts of exploring the house and getting scared by ghosts. Then comes the epilogue twist which I thought was cool. Sure, it wasn't that believable but it made the film go in an unexpected direction. That this then loops around and leads into a more generic final twist was a shame, especially as in the context of what we have only just learnt this final twist doesn't make much sense. 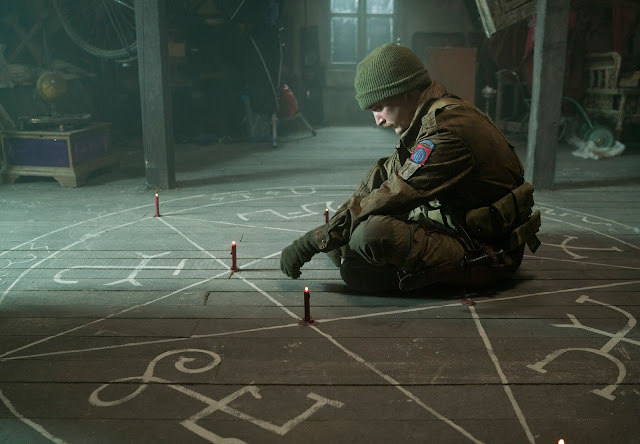 As a war horror film this is passable, a lot better than quite a few others, I would say it was nearly on a level with the very interesting Deathwatch (a 2002 horror about soldiers haunted in a captured German trench). It doesn't quite stick the landing though with the two twists butting heads against each other. It might feel generic at times but I enjoyed it thanks to the decent special effects and competent cast (especially Gallner). Ghosts of War is currently streaming on Netflix.