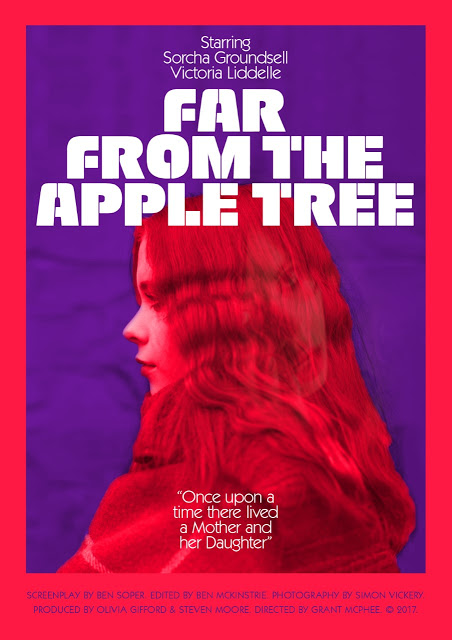 Far From the Apple Tree is a very hard movie to follow, using arthouse style editing throughout and with a story that is really hard to pin down it makes you work hard for answers. That this comes from Grant McPhee isn't that surprising, seeing as his Scottish 2017 horror Night Kaleidoscope was also trippy and bizarre. I said of that film that watching it was like being on drugs, and here, once again that is the overall feel I got, like I had been dosed with LSD before sitting down to watch this (it doesn't help I was already feeling out of it due to some sort of head type cold I'm currently afflicted with...pretty sure it's not Covid!).

Judith (Sorcha Groundsell - The Innocents TV show) is a young struggling artist who is finding it difficult to get her work noticed. After attending an event showing the work of renowned occult visual artist Roberta Roslyn (Victoria Liddelle - The Loch TV Mini-Series) she is surprised to receive a call from her. She says she saw something special in Judith and invites her to come stay at her remote mansion in order to archive her work. In exchange she promises the girl that she will get to put on a show of her own work once she is done. Judith jumps at the chance and is given free reign of the house, but as she begins her job she is concerned to see that the main model used in Roberta's work looks much like her, she is even more concerned when she learns this girl, Maddie, was Roberta's now missing daughter. Suffering strange hallucinations and nightmares the longer she stays there, Judith begins to think something more is going on than what she had initially been led to believe. 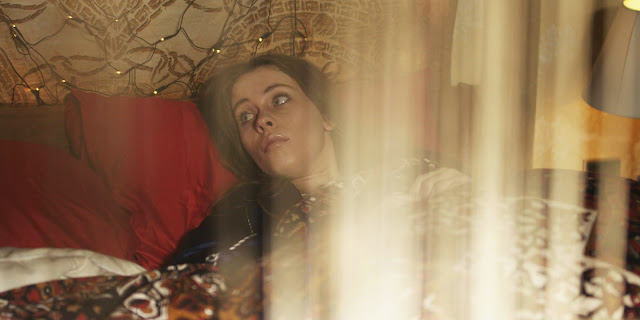 Far From the Apple Tree felt like the longer it went on the more obtuse it became, the more the arthouse style moments bled into the main film and the more it required of the viewer to really try and make an effort to see what was going on. There was an initial vibe that made this feel similar to The Wicker Man. You get the sense that the purpose Judith has been tempted to the house with is far different to the more sinister real purpose. With Judith the viewer gets to see the transformation of the house from a dream to a nightmare. The house itself felt like a representation of Roberta's mind, characters even say as much at one point. The longer the girl stays there the more the lines between reality and fantasy get blurred and like Judith herself you begin to wonder what the truth even is anymore.

It is this descent into a dreamlike state that also hampers some of my enjoyment for this. I put this down mainly to me, often when even a confusing to follow movie has ended I am able to come to some conclusions. Here, I found it harder and harder to decipher what was happening. Each puzzle piece slotted into place just led to more confusion and questions. I felt like I started the movie in a similar place to how Judith was, I was enthralled by the fairytale atmosphere of the strange mansion, and the strange people in it. By the film's conclusion however I was none the wiser what was going on, while it seemed Judith was far more clued in, leading to a finale that was totally lost on me, and one that felt far more positive and happy than it seemed it should have been. I don't know if this was a general message about compromising and diluting your essence to be truly accepted, or if the apparent happiness of the ending was in itself meant to be taken as chilling, with Judith fully given herself over to the dreamlike world.

The film looks fantastic, the editing and cinematography both were excellent, as was the really great score. I loved how the footage being studied melds into the real world. Whether that be Judith emulating the movement and speaking pattern of Maddie, or the footage of the house providing clues for the secrets it has hidden within it. There was often a feeling of quiet peril that never really led to what I had hoped it would do, but it was well sustained regardless. Due to the editing, which increasingly  takes centre stage, it did feel at times, certainly in the film's third act that things were almost becoming a little dull. The acting of the main cast was great, and it was nice to see an all female cast for a change. 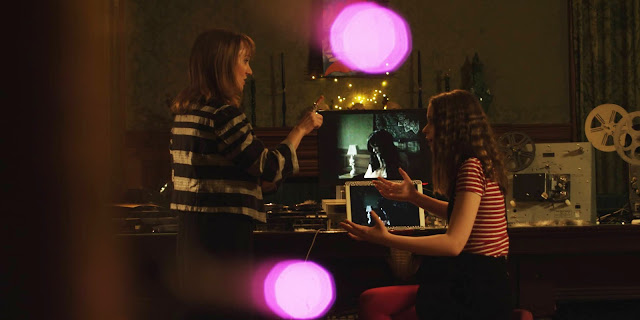 Far From the Apple Tree conjured a feeling of witnessing a fever dream. This had a very dreamlike and fairytale atmosphere that made watching the film feel quite trippy. For me I wasn't really able to grasp enough threads to be able to formulate a cohesive story in my mind, so my enjoyment suffered.. Still, much like Night Kaleidoscope this was a unique experience, and in the right kind of mood you don't really need anything else. Far From the Apple Tree is now available to stream on the UK Redemption label.

Posted by Daniel Simmonds at 11:07