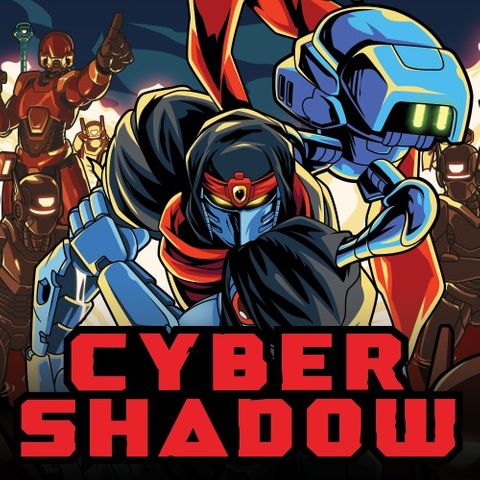 I was lucky enough a week last Saturday to finally get my rotted claws on an Xbox Series X console. It soon became clear to me that it was going to take a heck of a long time to download the games I wanted to play on it. Having seen screenshots of the retro action platformer Cyber Shadow and been pleased with its fantastic 8-bit aesthetic I decided to download it to play while I waited for current gen games to download. This game is very frustrating, but it is also very enjoyable in almost equal measures, and boy, this sure is a tough game to get through!

You are Shadow, a cybernetic ninja whose last memory is of being caught in a blast that decimated the city you called home. You awaken in an underground facility with no memory of how you came to be there. You and your clan were led by a woman known only as Master. She was the daughter of renowned scientist Dr. Progen whose greatest deed was creating a huge workforce of robots designed to make day to day life easier for all. Your clan were tasked with dealing with any robots that went rogue. Things were good until the day Master discovers she is terminally ill. Unable to accept that he can't cure his daughter, Dr. Progen is driven insane and resorts to more and more drastic experiments to try and find a solution. Finally he decides that 'essence' (a type of magic) that all humans contain within them is the key to curing her. He transforms his robot workforce into a deadly army and instructs them to kill all they come across, then when this isn't providing him with enough essence he destroys the city hoping the gigantic loss of life will provide him with what he believes he needs. Shadow, guided by the voice of Master sets out to stop Dr. Progen, and rescue her from his grasp, even if this means she will most certainly die... 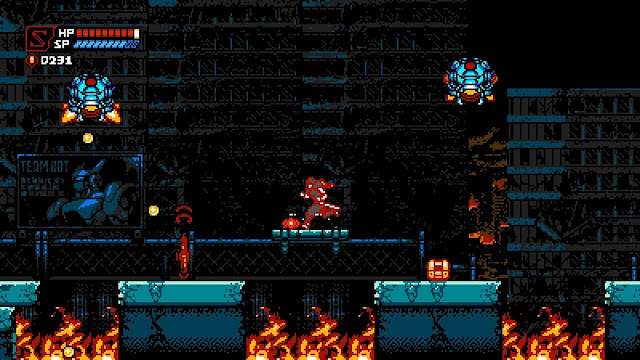 This game looks so good. It is 8-bit but that doesn't mean it is restricted to the capabilities of games from that era. It uses the graphical style as a template but uses all the power of modern day games to make it look and play like a dream. Throughout there are plenty of cutscenes, again created using beautiful pixel art, and this added power also means irritating elements of old games, such as enemies respawning off screen is gone. When enemies are destroyed here they are thankfully gone for good. The game is huge, split into ten stages, each of which is split into many side-scrolling levels full of tricky platforming to traverse. Roughly every three levels you get a checkpoint. In a cool move you can use a form of currency that enemies and objects leave in order to attach specific perks to your checkpoint. These usually include the ability for your health to be restored at your current checkpoint, your magic to be restored, and to have a power-up which takes the form of a small robot that hovers by you as you progress.

Cyber Shadow is very post apocalyptic in feel, with a very sci-fi angle to it. Stages are varied, though due to the theme they all look kind of similar. Made up of underground bases, ruined cityscapes, and robot factories. Most stages see you trying to platform your way across them while under attack from enemies who either shoot at you or attack you more directly. The majority of the enemies are robots but include a wide variety, many of which are stage specific. Along the way you fight various bosses who are actually a welcome breather as nearly all of them are quite easy to defeat with limited attack patterns. The final boss was a three tiered battle and that was a little bit more tough. Also splitting up the platforming are a couple of stages that have you using vehicles. One has you on a sentient motorbike, another has you piloting a sentient mech suit, both made a nice change for a little bit and didn't outstay their welcome. 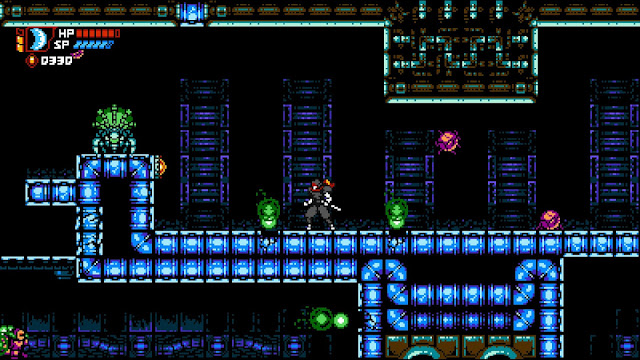 As you progress through the roughly ten hour game (on a first playthrough) Shadow gets more and more abilities, but the stages get ever more tricky to navigate even with these. By the end of the game Shadow is able to change bullets fired at him into projectiles he can send back, he can double jump and wall jump, and can do a running jump that combined with an attack from his sword propels him across the screen. This is where a lot of the frustration comes in, especially in the second half of the game that starts to include more and more stages full of instant death spike pits and electrified floors. Upon the games completion it provides you with a stat screen which includes amount of deaths. I died 356 times! Enemies can knock you off platforms into instant death, very annoying. Even more annoying is the amount of times that the moves you are trying to pull off simply don't work. Examples include the running jump which you have to tap the direction button you are moving in twice to activate. I lost count of the variety of ways I meant to run off a platform and jump but instead walked right off into a pit of spikes and died. Cyber Shadow seems to struggle when there is too much going on, it felt like there was always a dubious 10% chance that the move you are trying to do wouldn't work under pressure. Another late game example was a vertical series of stages in which you had to bounce off of robots to traverse upwards. To get to the top of  a stage and then have the bounce move suddenly not work on the final enemy (causing you to plummet all the way back to the start) was exceptionally frustrating!

Despite all the cutscenes, and the computer terminals that provide more back story, as well as the characters you fight the plot overall was one of the weaker elements of Cyber Shadow, there is enough there, it just isn't particularly interesting (some parts are, such as the game's set-up). Way on the other end of the scale is the soundtrack which is chip-tune perfection, there was not a single bad track in the entire game, it was a dream to listen to. This is where the duel aspect of the game comes to the forefront. I was in love with the look and sound of this futuristic homage to Ninja Gaiden and Castlevania, and the combat and platforming could be so much fun. Yet, this is highly frustrating at times with me turning the air blue throughout. I am going to give this game a high score, despite how annoying it could be and it gets a lot right. This is a hard game on an initial playthrough, but it was also something I look back on with fondness. Cyber Shadow is on Xbox Game Pass so if you have that then certainly give it a try.

Posted by Daniel Simmonds at 02:45